STANFORD
UNIVERSITY PRESS
How Pictures Complete Us
The Beautiful, the Sublime, and the Divine
Paul Crowther 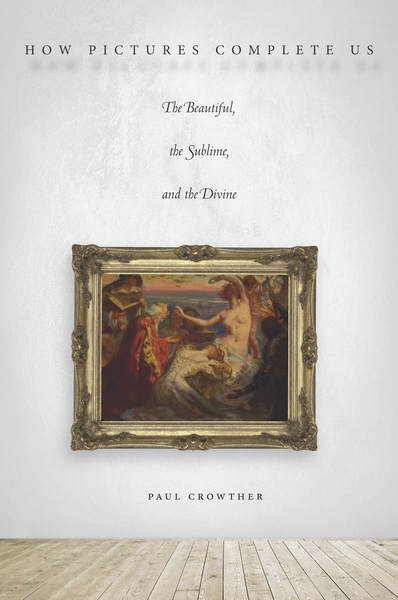 How Pictures Complete Us
The Beautiful, the Sublime, and the Divine
Paul Crowther

The Introduction argues that the customary concepts of expression or expressive qualities used by Anglo-American philosophy cannot explain art's capacity to give us a sense of psychological completion. It is argued further that aesthetic transcendence (a felt symbolic 'going-beyond' our finite limitations, and, also - in some circumstances- a felt communion with the Divine) is a better way of grounding such self-completion. Each artistic medium is able to evoke such transcendence on its own terms. To show what is special about pictorial art in this respect, a general theory of pictorial beauty is formulated – emphasizing the twofold open unity of the spatial object as its key feature. This suggests a link between aesthetic transcendence and the Divine that can be interpreted in either secular imaginative terms, or, on the basis of faith, as a genuine intimation of Divine presence.

Part I traces the philosophical origins of the concept of Ideal beauty in classical antiquity, and in later European thought. Part II examines Joshua Reynolds account of ideal beauty as a justification of the 'grand style' in painting. In Part III, this theory is evaluated. Part IV salvages some key elements from it, and argues that Ideal beauty in art is philosophically viable – but only if we supplement Reynolds with ideas that tie the Ideal to the classic tradition in painting rather than to some more global notion of a 'grand style'. In the course of this, the ideal beauty of classic painting, is shown to have a distinctive aesthetic character bound up with geometric immanence and the metaphysics of the concrete universal. Part V shows the continuing relevance of Ideal beauty and classic art through discussion of Malevich's late figurative work, and Ian Hamilton Finlay's postmodern classicism.

Section I of this chapter describes how picturing symbolically reconstructs the human experience of space and time in terms of presentness. Presentness is picturing's idealization of the visual present. Section II shows how the role of pictorial space in this also involves an idealization of the systematicity of our visual relation to the spatio-temporal world. At the heart of this is linear perspective, or, just as importantly, the appearance of being perspectival. Section III argues that these idealizations constitute a metaphysical beauty – which admits of both religious and secular interpretations. In Section IV, it is argued that this beauty is a useful factor in explaining why pictorial art is of enduring transcultural and transhistorical intrinsic fascination, i.e. why it matters expressively.

The present chapter explains the aesthetic transcendence involved in the sublime by reference to Kant's complex theory. Parts I and II outline and criticize his notions of the mathematical and dynamic sublime, respectively, through adapting and revising theories set forth in Kant's Critique of the Power of Judgment. The upshot is a viable general theory of the sublime which is then further refined, through the identification of an important variant of the dynamic sublime, namely an iconographic sublime. In III, a further, distinctively pictorial version of the sublime is formulated through further adaptation of Kant's position. The work of the contemporary Israeli artist Bracha Lichtenberg Ettinger is considered in some detail as an illustration of the contemporary complexity of the pictorial sublime.

Mark Rothko is quoted as saying that 'A painting doesn't need anybody to explain what it's about. If it's any good, it speaks for itself.' But if Rothko's claim is to have any truth, it must be based on some dimension of inter-subjectively intelligible meaning in abstract works. Fortunately, there is a theory that can explain how this intersubjective intelligibility is possible. It argues that abstract art operates through allusive meaning. The present Chapter, accordingly, first outlines the general theory, and then develops it further through a link to three metaphysical factors that enable a distinctive mystical variety of the sublime. It is then argued that a particular kind of color-field abstraction – exemplified by the work of Mark Rothko and Barnett Newman - has an important relation to the mystical sublime.

This chapter addresses how the experience of momentariness can be illuminated and brought to a kind of completion through cooperation between old and new media. In Part I, the significance of photocollage is addressed, and the possibility of a related quasi-painterly practice where the artist uses photographs taken only by himself or herself. Part Two relates the upshot of this practice – the Experience-Object - to aesthetic criteria, and to the role of the body, and the relation between painting and the holistic unity of experience. Part Three considers some further philosophical implications of these points, and, in Part Four, the way in which the creation of Experience-Objects could be extended through digital imagery. In Conclusion, the significance of this practice for the future of art is briefly addressed.

6 From Perspective to Icon: Marion's Theology of Painting
chapter abstract

Jean-Luc Marion argues that there is important religious meaning in pictorial art, but that its meaning has been obscured by historical developments. This meaning results from the complex interrelations of a number of factors. Part I of this Chapter offers a detailed account of this complex, by analyzing Marion's accounts of perspective, invisibility, and the gaze. Part II then addresses his concept of authentic painting and the 'unseen' and the particular problems raised by some key modernist tendencies. In Part III, it is shown how Marion understands the meaning of the icon as an overcoming of these problematics. Part IV subjects Marion's whole theory to detailed critical review – identifying both its strengths and (much greater) weaknesses vis-à-vis aesthetics so as to set the scene for the alternative metaphysics and theology of pictorial art offered in the final Chapter of this book.

Part I makes general points about the character of the universe considered in itself, and then in relation to self-consciousness. It is argued that only with the advent of self-consciousness does a temporal horizon of past, present, future, and possibility come into being. Part II considers how this horizon is made concrete in spatial terms through the making of pictorial art. It is shown that such art concretises the temporal horizon through its idealization of the notions of the present, and that of possibility. In Part III, it is argued that the metaphysical structures just described have a further level of religious significance viewed in the context of faith. Accounts of faith and of this religious significance in pictorial art are offered in turn. The book ends with some remarks on the theological significance of beauty and sublimity as such in relation to the Divine.