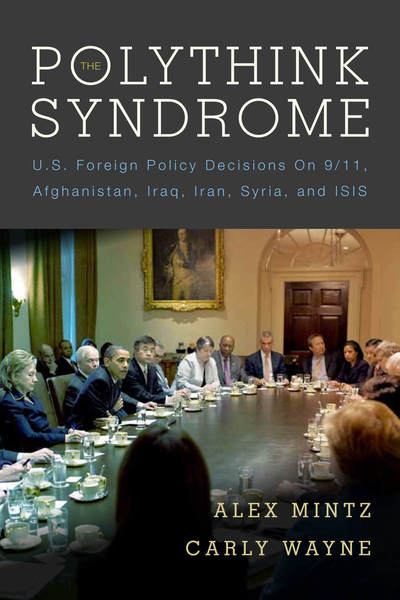 How do presidents and their advisors make war and peace decisions on military intervention, escalation, de-escalation, and termination of conflicts? Why do they often make sub-optimal decisions? Why do important policy goals, plans, and aspirations frequently result in inaction? The leading concept of group dynamics, Groupthink, offers one explanation—cohesive policy-making groups, such as advisors to the President, often make sub-optimal decisions due to their desire for uniformity over dissent, while ignoring important limitations of chosen policies, overestimating the odds for success and failing to consider other relevant policy options or possibilities. But presidential advisory groups are often fragmented and divisive. We thus introduce Polythink, a group decision-making dynamic whereby different members in a decision-making unit espouse a plurality of opinions and offer divergent policy prescriptions, which can result in intragroup conflict, a disjointed decision-making process, and decision paralysis and inaction as each group member pushes for his or her preferred policy direction.

In The Polythink Syndrome, we analyze U.S. national security and foreign policy decisions such as the pre-9/11 national security choices, the decisions to enter into and withdraw from Afghanistan and Iraq, the crisis over the Iranian nuclear program (analyzed from both the American and the Israeli perspectives), the summer 2012 UN Security Council debate on the civil war in Syria, decisions in the 2013–14 Israeli–Palestinian peace negotiations, and the 2014 U.S. decision to attack ISIS. We illuminate the prevalence of Polythink, a phenomenon no less problematic or common than Groupthink, demonstrating how otherwise smart, experienced decision makers can engage in flawed decision-making processes that deeply affect the security and welfare of a country. We also discuss how Polythink characterizes many corporate and business decisions and day-to-day decisions and can thus have important implications for group-based decision-making processes outside of the political realm, such as in marketing, R&D, and financial decisions.

Furthermore, we explain how leaders and other decision makers (for example, in business) can transform Destructive Polythink into Productive Polythink, illuminating the potential ways in which this group dynamic may be effectively directed toward sound decisions. By shining a light on Polythink’s symptoms and consequences, and on the factors that lead to Polythink, we seek to offer actionable policy prescriptions for elite decision makers to offset the negative attributes of this phenomenon and engage in more optimal policymaking processes.