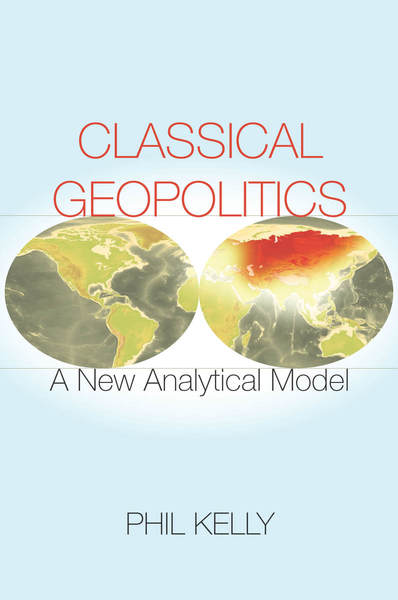 Several motivations of the author prompted the writing of the book, a mission primarily to elevate the visibility and legitimacy of the classical geopolitical approach as an accepted IR model. A major aim is to separate geopolitics from realism, where many have wrongly placed it. Also, this intend offers a description of "critical geopolitics" as distinct from the classical. Assumptions, concepts, and theories find depiction as parts of a model, these adhering to the classical definition. Additional topics include: political geography as separate from geopolitics, the "scientific" approach, and a methodology suggested for theory selection.

Models are containers for theories; they are passive and lend only to bundling of theories. Theories come as simple sentences of probability. No "geopolitical theories" exist; only theories under their own labels but fitting the classical geopolitical definition. The test for probability focuses upon the common-sense appropriateness of theories showing good insights into international events. The leading IR models in addition to geopolitics are described: realism, systems, dependency, hegemonic cycles, and functionalism. A further description of Cohen and Grygiel concludes the chapter.

3 Several Geopolitical Approaches of the Recent Past
chapter abstract

As a way to show distortions of past ideologies that have weakened the classical version of geopolitics, three depictions of these distortions are made in this chapter – the geopolitik of General Karl Haushofer and his Munich colleagues; the Cold-War power-politics containment geopolitics of post-World War Two; and the more recent critical geopolitics or post-modern stances of critical political geography. The chapter concludes with further descriptions of classical geopolitics.

This chapter begins with providing reasons why concepts and theories should be combined and not kept separate within chapter designations. Next, five categories of description are formed where sixty-odd theories receive assortment. The remaining pages define and provide short applications of each theory for testing for insights awarded by the selected generalizations.

6 Applications of the Model
chapter abstract

Several suggestions for applying theories to international events happen first, followed by eight case-studies that exhibit the application of theories toward gaining deeper insights into these events. The eight studies include: the Peloponnesian war compared to South American diplomacy; the Ukraine shatterbelt; shatterbelts affecting the early United States; new shatterbelts possibly emerging; the geopolitics of the three American sectors; United States and Paraguayan geopolitics; and the geopolitics of ancient Rome.

7 Setting the Course for a Rejuvenated Geopolitics
chapter abstract

Eleven suggestions are raised for a "call to action" for setting out a reinvigorated geopolitics: legitimize the study of geopolitics; emphasize the classical over the critical; separate geopolitics from realism; clarify and agree upon an appropriate definition; agree to the model's parts – assumptions, concepts, and theories; collect geopolitical assumptions and concepts-theories; also collect applications of theories to events; and organize a support group of geopolitical enthusiasts.