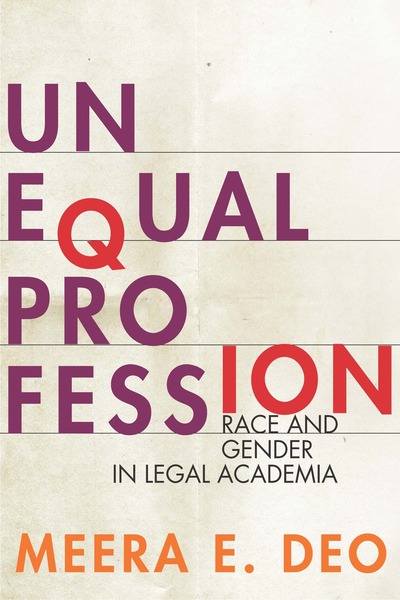 ALEXANDRA IS A SUPERSTAR. She earned undergraduate and law degrees from exclusive institutions, secured a prestigious federal judicial clerkship, and practiced law at an elite corporate firm. Even with these accomplishments, Alexandra had to overcome significant hurdles to become one of few Black female law professors. To start, she “honestly had not considered law teaching,” thinking that career would “never be available to me”—since the majority of her own law professors had been white men. She applied for a teaching position only after a friend “who is a woman of color that was teaching” suggested it. Alexandra began as an adjunct, teaching a course or two while continuing her legal practice; other female professors encouraged her to apply for an academic fellowship. From there, she went on the teaching market and is now a tenure-track assistant professor. Alexandra’s pathway—from elite education, prestigious practice, and adjunct teaching to a tenure-track position—is not unique among African American female law faculty or other women of color law professors. Her experience working as a legal academic is also representative. For one, students at her law school were “so excited” to finally have “involvement from a young woman of color professor”—since most of her colleagues are older, white, and male—that she was immediately inundated by requests “to be an advisor on several student notes,” as well as “the faculty advisor for BLSA [the Black Law Student Association],” and the “coach [for] trial teams.” While she contributes what she can, her sights are set on tenure, so “it’s just been very difficult to give them that energy.” Alexandra is the primary earner in her household, with a husband who works full-time but makes significantly less than she does and young children at home. Unsurprisingly, she says, “I never feel balanced by the day. [Instead,] I consistently feel like something had to give on that particular day,” though she tries to take the long view to achieve balance over time.

Also searching for balance, an Asian American professor named Elaine “structured my [personal] life so that it was maximally conducive to a busy work life.” When she started teaching two decades ago, Elaine chose to live close to campus, “so I could walk to work and get to work easily whenever I needed to.” As the first pregnant faculty member at her institution, she did not feel she could take any time off; instead, “I had my baby one day, and I was back to work the next week.” Like Alexandra, Elaine first taught as an adjunct while practicing corporate law, then went on the national market and secured a full-time tenure-track faculty position. While she “really tried hard to master the course material,” teaching was an ordeal primarily because of disruptive students who questioned her authority; students challenged her in class, “particularly, it seemed young men, and it seemed young white men, [who would] throw out something to test my expertise.” Her interactions with faculty colleagues have included similar “ups and downs,” and while “there have always been people who I’m cordial with and friendly with, I don’t have close friends on the faculty.” This is in part because Elaine has been dismissed, overlooked, and silenced numerous times by her colleagues. She tried to contribute by “saying things at a faculty meeting, [but] no one paid attention to it; and then a man would say it and then everyone would pay attention to it.” That same mansplaining and “hepeating” continue today.

A Latina law professor named Carla echoes Elaine and many other women of color in legal academia in asserting that “the most frustrating obstacle has been in the faculty groups where some faculty members are very comfortable dominating the conversation year, after year, after year.” Some colleagues also take credit for the words of their female colleagues. As Carla notes, “I’ve counted over ten times on my faculty where I’ve said something and a male faculty has repeated it and another male colleague has said, ‘Good idea!’” giving the man credit for Carla’s original contribution. Over time, Carla has adapted to the norms and expectations of her institution, so different from the traditional Latino household in which she was raised. When Carla applied to college, she was “hoping to go east [but] my father did not allow me to do so,” deeming it too far away from their home in the west. Instead, she attended an elite university in a neighboring state before pursuing law school. Within a decade of graduation, Carla had earned a PhD and landed an impressive fellowship. As a condition of the fellowship, she participated in the Association of American Law Schools (AALS) Faculty Appointment Register and accompanying recruiting conference in Washington, DC, the primary mechanism for securing a tenure-track position in legal academia. To Carla’s “great surprise, I had many callbacks and I even had offers, at which point it becomes impossible to turn one down.” That was over twenty years ago. At that time, her law school “didn’t have written tenure standards and someone explained to me, ‘You’ll get tenure if people like you,’ which was a terrifying concept” because it was so vague, completely outside of her control, and easily manipulated. She enjoyed teaching but dreaded reading student evaluations; in one particular set, “the numbers were fine but the comments were vicious and I felt like I had PTSD. I went home, I sat on the couch kind of comatose; my spouse said, ‘This isn’t like you.’” Nevertheless, she persisted. Today, Carla is a tenured professor of law. She has “been approached by a few institutions” to apply for deanships but is clear about her professional priorities, stating unequivocally, “I don’t want to be a dean because I much prefer writing.” Carla is superficially “friendly with everyone” on her faculty, although they keep their distance from one another: she has only “been invited into a colleague’s home individually once in twenty-two years.”

While each law professor’s narrative is different, all are joined by the commonality of experiencing legal academia as outsiders, women of color in a landscape dominated by whites and men. Challenges associated with the intersection of race and gender are especially salient. From Alexandra’s perspective:

Everything—from teaching and the way that you go into the classroom, to the way that people filter things you say in faculty meetings, to the expectations put upon you, to your financial background—you can’t disentangle it [from race and gender]. This is how you go through life and I think it comes largely into focus when you are in academia because privilege is so much in focus and different privileged vantage points are so much in focus. I can’t identify anything that it doesn’t touch and affect.

While women of color share commonalities with white women, men of color, and even white men, this book details the experiences of women of color in legal academia, revealing challenges and opportunities associated with race and gender that are unique to these underrepresented faculty. As Alexandra says, “My experience is completely different than it would be if I were not a person of color or not a woman.”