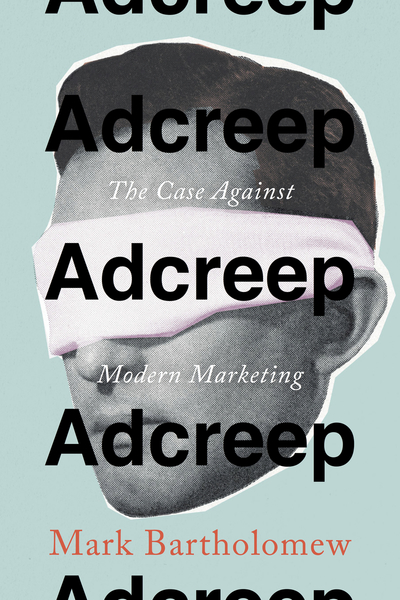 Contents
Excerpts from the Introduction

In 1999, Steven Spielberg was working on a new movie, an adaptation of Philip K. Dick’s short story “The Minority Report.” Although the story was science fiction, set in an undated time in the future, Spielberg wanted the film’s details to be realistic. The director did not want an over-the-top dystopian fantasy but a plausible vision of what might come to pass in fifty years. To help him build this vision, Spielberg convened a group of technology experts and asked for their prognostications. Front and center in their discussion was advertising. They predicted a world where advertising had become more personalized, more insistent, and more effective. The experts envisioned omnipresent and, thanks to facial recognition technology, individually targeted ads. Spielberg used their insights in the film, describing a future where advertising doubles as a surveillance tool, helping to keep citizens under the thumb of shadowy bureaucratic overlords.1

That future is now. New advertising techniques, some of them forecast in Minority Report, follow every step of our lives. Surveillance technologies (including facial recognition software) compile digital dossiers on potential consumers, the data shuttled along an impenetrable web of veiled third parties and used to craft individualized ads. Marketing messages adorn once ad-free zones like schools and state parks. Through a barrage of carefully choreographed blasts of online information, celebrities engineer a calculated familiarity, entreating us to “follow” and “like” them so they can further quantify and monetize their personal brands. Neuroscientists perform the ultimate market research, using brain scans to reach into consumers’ heads and calibrate advertising campaigns for maximum appeal. As in Spielberg’s film, these techniques are becoming embedded into the fabric of daily life. This is adcreep—modern marketing’s march to create a world where advertising can be expected anywhere and at any time. Whether we realize it or not, adcreep has come, transforming not just our purchasing decisions but our relationships, our sense of self, and the way we navigate all spaces, public and private.

The marketing techniques detailed in the following pages are not the stuff of science fiction. They are currently being implemented by the most powerful companies and people in our society. A skeptic might argue that we have nothing to fear from adcreep. Consumers adjusted to past marketing innovations, like radio and television, and they will do so again. But the selling strategies of today—what I describe as the “new advertising”—are revolutionizing the relationship between advertiser and consumer. By deploying a variety of new marketing devices, businesses can expand the areas where their messages can be heard, develop rich and portable records of consumer preference, deliver advertising customized for the idiosyncratic thought processes of individual commercial targets, and obscure their own role by mobilizing others to convey their advertising messages for them. These techniques let advertisers know us on a deeper, more intimate level than ever before, dramatically tilting the historical balance of power between advertiser and audience. The algorithms that advertisers use to analyze our Facebook likes do a better job of identifying our personalities than our friends, lovers, or families do. Automated systems decode our facial expressions, revealing emotions we would otherwise be able to hide. Brain scans and biometric measurements tell marketers what we are feeling even when we cannot verbalize those feelings ourselves. Meanwhile, in a world of omnipresent advertising, corporate America can hide in plain sight. When no space is off-limits to commercial appeals, we become numb to the ideology of advertising, lowering our defenses, accepting Madison Avenue’s suggestions for self-definition, and no longer considering alternative, non-market-based perspectives.2

Like the air we breathe, modern marketing inescapably infuses our environment. By some estimates, the average American is exposed to over three thousand advertisements each day.3 But this marketing torrent does not need to flow unrestricted. Legal authorities have the capacity to channel it in ways that advance marketplace efficiency and consumer welfare. A complex system of legal regulations already exists to serve these ends. Yet when it comes to the latest round of marketing innovation, this system remains dormant, oblivious to the changes around us. In my teaching and writing on the latest developments in intellectual property and privacy law, I came to the realization that the most important cases I read often centered on new advertising technologies. They might be described by most legal scholars as intellectual property cases or privacy cases, but they were really advertising cases. And, for the most part, the advertisers have been winning these cases.

This is not the first time that marketing technologies have threatened to upend the consumer-advertiser relationship. We live in a commercial world. Whether it was the machinery of mass production or the creation of the Internet, technological upheaval is inevitable and so is its immediate appropriation by marketers. Sometimes innovative advertising can prove socially beneficial. Mass marketing spread the word about new kinds of products, like refrigerators and dishwashers, that gave people more opportunities for leisure. Amazon’s predictive analytics can reduce the time we spend searching for consumer goods. But advertising’s innovations need to be interrogated before new patterns are established and it becomes too late to evaluate their costs against a historical benchmark. As the philosopher Helen Nissenbaum notes, different social arenas have different norms that should be investigated to determine the potential toll from a loss of privacy. Similarly, in wrestling with the consequences of the new advertising, different environments need to be studied so we get a sense of their contextual integrity and what might be lost by allowing today’s marketing strategies to proceed unabated. And when the consequences appear too grave, law needs to be used to restrain opportunistic and invasive practices.4

Law is the necessary referent to compare what is possible with what is not possible when it comes to modern marketing. It forms a backdrop for what advertisers can and cannot do, setting the line between swindling and selling, fraud and commercial honesty. Sometimes citizens can protest overzealous selling tactics by voting with their pocketbooks. Markets are not a cure-all, however. History shows that at different moments, as advertisers leveraged new technologies for their persuasive projects, legislators and judges set boundaries on commercial behavior. Highway billboards, subliminal sales techniques, and the digital resurrection of deceased celebrities all provoked legal responses. Understanding these historical episodes is important not because they provide perfect analogies for today’s advertising tactics, but because they reveal the need for thoughtful analysis of the potential economic, social, and cultural disruptions generated by new forms of commercial persuasion.

Unfortunately, there has been scant discussion of the potential harms of commercial surveillance, advertising in public spaces, the celebrification of online identity, or the marriage of neuroscience with marketing, particularly by legal officials and academics. Even rarer are comprehensive accounts of advertising’s simultaneous spread on a variety of fronts. Instead, with little public debate, many of these marketing initiatives were introduced in the middle of an economic downturn, amid a willingness by private and public entities to realize new revenues by opening up spaces to advertisers. Even when these entities have tried to restrict advertiser access, they have come up against legal roadblocks. Advertising is a global industry, but this is a particularly American story. A variety of novel legal interpretations in the U.S. legal system provide an environment hospitable to the new advertising and hostile to its regulation. By enshrining commercial speech with vigorous First Amendment protection, the Supreme Court handcuffs those who would limit advertising’s entry into traditionally civic spaces. Contract law gives advertisers a free hand to induce consumers to bargain away their privacy interests with the click of a button. Expanding intellectual property rights let companies and celebrities censor unauthorized communications that conflict with their desired messaging. These trends in legal doctrine allow advertising and its concomitant free market philosophy to spread and become naturalized. As a result, the insistent creep of invasive advertising is taken as a given in most quarters, a tax that has to be paid for life in the modern world. Adcreep has consequences, however, and these consequences should be recognized and considered before deciding to allow the new advertising to continue unimpeded.

2. I use the term Madison Avenue in its popular sense as a metonym for the American advertising industry. In reality, most of the advertising agencies that once clustered in this particular area of New York decamped for other locations in the late twentieth century. Deborah Leslie, Abandoning Madison Avenue: The Relocation of Advertising Services in New York City, 18 URBAN GEOGRAPHY 568, 568, 577–79 (1997).