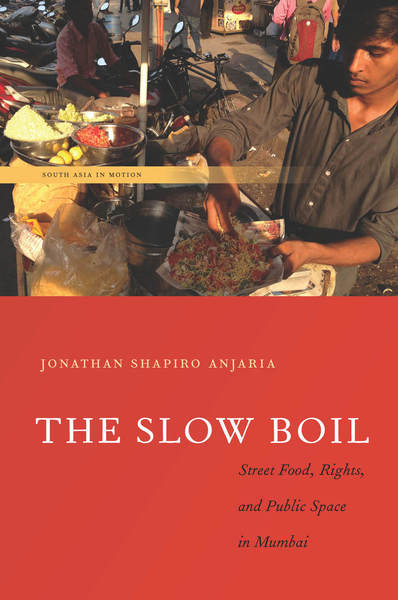 The introduction examines what is at stake for a study of spatial contestations in Mumbai. It outlines three theoretical conversations with which this book engages. Firstly, it discusses how the themes of inequality and urban citizenship are explored in the literature on conflicts over space. Secondly, it discusses how transnationally circulating concepts of streets and public space shape cities in the present. And lastly, it shows how conflicts over urban transformations must contend with the incongruities of the "everyday state" and the varied forms of political recognition it offers. In doing so, this chapter offers a broad outline of the legal, political and social context of the Mumbai hawker controversy.

The municipal government has dealt with the "hawker nuisance" at least since the 1880s. And yet, scholars often treat demolitions, dispossessions of the poor, and elite-oriented development as effects of a new logic of urban governance associated with neoliberalism. This chapter show that, for over two centuries, the authorities in Mumbai have struggled to control a landscape of encroachments and illegalities. The chapter provides an account of the history of informality in Mumbai to challenge this assumption of novelty. Drawing from various historical documents—including official publications, travelogues and early twentieth-century newspapers—this chapter shows that for over a century, people's encounters with state functionaries have been characterized by compromise, co-option, and negotiation rather than anonymity and disciplining. What is new about the contemporary urban moment is not spatial contestation itself but its broader significance as a site for negotiating the form and content of rights.

This chapter provides an account of how street vendors inhabit the city, its streets and its public spaces. In doing so, the chapter answers the questions: What does it mean to work on the side of the road without a license? And, is it is an act of urban exclusion or of rebellion? Writings on informal economies typically fall into one camp or the other. By contrast, this chapter shows how hawkers occupy a contradictory existence—inhabiting a vulnerable legal existence while deeply enmeshed in the daily life of a neighborhood. It argues that this space between precarity and possibility offers a model for urban ethnography: attention to political economic processes and affective experiences is not mutually exclusive—with one more "real" than the other—but exist in a generative tension that is constitutive of urban life.

Street vendors' spatial claims are secured through cultivating relationships—sometimes intimate ones—with state functionaries, often through unofficial payments called hafta, but also through counter-surveillance, social interactions and public protest. This chapter examines these encounters with the state. It shows how, despite being unlicensed, hawkers' everyday experiences are marked by proximity to the state rather than distance. Street vendors' protracted encounters with BMC officials, clerks, workers, and the police challenge the language of abandonment and abjection that informs much scholarship on urban marginality. As I demonstrate, the street is not only a product of the disciplinary techniques of rational governance but an outcome of a negotiated process: in the eyes of the everyday state, unlicensed hawkers are not simply outside the law, but exist in a spectrum of illegality. This spectrum opens up possibilities for negotiation.

When civic activists brought attention to the "hawker problem" in the 1990s, they raised new questions concerning urban citizenship, corruption, and the proper form of democratic politics. This activism demonstrated that the question of whose voice is heard in urban governance was inseparable from the question of how to speak to the state. This chapter shows how middle-class residents' engagement with the informal life of the street produces a sensibility of the "estranged citizen." This sensibility reflects a feeling of alienation from traditional circuits of power. To civic activists, street vendors symbolize state corruption and inefficiency, but also powerlessness in face of the illiberal rights claims of the poor. However this chapter argue that as a sensibility, the subjectivity of the estranged citizen is irreducible to a single political. This ambivalent subjectivity has the potential for open-ended politics that goes beyond efforts to appropriate urban space.

Whereas to civic activists Mumbai's fluid, ad hoc, streetscapes represent a problem, to architects, designers, students, and writers around the world, these features are increasingly celebrated as a virtue. This concluding chapter examines the new place of the ad hoc streetscape within transnational architectural discussions on the megacity. Thirty years ago, Mumbai's landscape of squatters, slums, and informality was seen as an embarrassment; now these characteristics are often celebrated in exhibits, blogs, and films as signs of innovation, ingenuity, and small-scale entrepreneurialism. Resignifying "underdeveloped" urban landscapes as instances of "makeshift" or "tactical" urbanism raises new empirical questions such as, how does informality figure in the "branding" of cities? And, how is this new way to read urban landscapes recalibrating the relationships between the universal and the particular taken for granted in postcolonial theory?