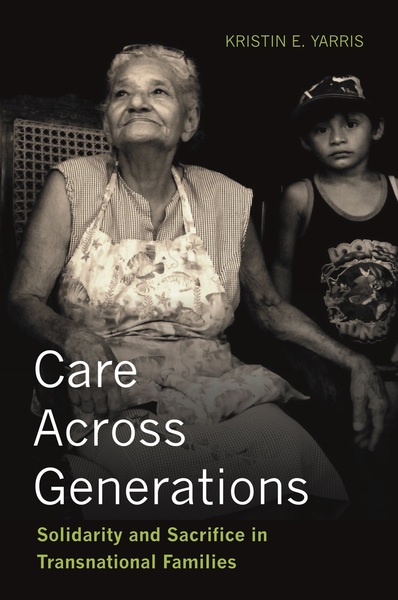 This book is an ethnographic exploration of the experiences of grandmothers who have assumed care for children in Nicaragua after mothers have migrated abroad. This is a story of transnational family life, but one that extends the analysis beyond nuclear families, moving outward from relations between mothers and children to focus on extended kin relations and intergenerational networks of care. By describing the tensions, uncertainties, and ambivalences of transnational life, and the role of grandmother care in responding to these troubles, this book shows how women of the tercera edad (third age, or grandparent generation) are central actors in global migration even without crossing national borders. This book therefore argues for the importance of an intergenerational perspective in social science research on migration, transnational family life, and the relations of care that are crucial for family health and wellbeing in the context of global migration.

In the early 2000s, while studying for a master’s degree in public health at the University of California, Los Angeles, I spent approximately six weeks over two summers accompanying groups of medical students and clinicians on trips to Nicaragua. The trips were organized to provide free medical care in rural medically underserved communities. My role in these medical delegations (brigadas) was to provide translation between medical students and physicians from the United States and their Nicaraguan patients. These encounters took place in makeshift clinics temporarily set up in schools, churches, and community centers, where the UCLA team was accompanied by Nicaraguan Ministry of Health (Ministerio de Salud; MINSA) staff. As a translator in medical contexts, I encountered all the challenges of making sense of not just what patients said to clinicians but the cultural meanings contained within patients’ embodied complaints. Among the most frequent complaints I heard were expressions of various dolores (pains) in different parts of the body, such as dolor en los huesos (bone pain) and dolor en los riñones (kidney pain). While I felt somewhat competent translating complaints that had apparent equivalents to health problems I was familiar with in the United States, one complaint I repeatedly heard, and which I struggled to make sense of through literal translation, was dolor de cerebro (brain pain or brain ache). In the space of our makeshift clinical encounters, providers would treat this expression as analogous to “headache” and often prescribe acetaminophen for the pain. However, given the frequency with which I heard the expression, especially among midlife or older-age women, I sensed that something other than a straightforward headache was being expressed by this complaint. When I asked MINSA nurses about dolor de cerebro, they affirmed that it was a common expression, at times attributing it to dehydration or other physical causes, eliding possible social determinants or cultural meanings of this pain. I remained skeptical, reluctant to translate dolor de cerebro as “headache” without understanding its sociocultural significance for women in this region of rural Nicaragua. When I returned to UCLA, I scanned the library’s holdings for references to dolor de cerebro, finding only one citation, to an article written decades earlier by transcultural psychiatrists working with Puerto Rican mental health patients (Abad and Boyce 1979). My interest was piqued, as I found myself wanting to move beyond clinical understandings of this pain into the social world of Nicaragua and the political, economic, and cultural factors shaping expressions of emotional distress for Nicaraguan women of the grandmother generation.

This was the motivation that took me back to Nicaragua in 2006 to conduct fieldwork for my master’s degree in anthropology, exploring the central question of the cultural meaning of dolor de cerebro. During a three-month study, in which I volunteered with local health nongovernmental organizations, assisted with education campaigns against dengue, and interviewed rural women, I found a consistent pattern of women of the grandmother generation situating the pain of dolor de cerebro as a response to their daughters’ out-migration (Yarris 2011). While unexpected, this finding pushed me to commit to further research on migration as one important social determinant of health and well-being not only for migrants themselves but also for later-adult women of the grandmother generation. Much existing scholarship on migration and transnational families has sidelined the role of grandmothers, usually focusing on nuclear families or on relationships between parents and children. This book expands our understanding of transnational family life across borders and generations by foregrounding the experiences of family members in Nicaragua living with the consequences of migration, especially for grandmothers and the children in their care.

During the year of fieldwork on which this book is based, I made my home in Managua, Nicaragua’s capital city and a chaotic urban landscape marked by all the contradictions of late modernity: traffic jams of public buses and carros blindados (sedans and SUVs with darkened windows), sprawling low-income barrios and newly constructed middle-class tract homes, ambulant street vendors and upscale shopping centers. The city was difficult to navigate, especially on the typically hot days, without a clear city center (Managua’s centro having been destroyed by an earthquake in 1972) and with directions given by referring to where buildings once stood, before the earthquake (e.g., “dos cuadras al lago de donde antes era el cine”; two blocks toward the lake from where the cinema used to be). And yet, living in the city, I managed to find my way transiting between the small room I rented, the university where I often worked, and family homes I would visit every day.

One morning, months into my fieldwork, when I was scheduled to visit with a grandmother participating in my study, I woke up feeling incredibly ill. I was not surprised, as the social ecology of sickness in Nicaragua was ever apparent among Managua’s inhabitants, and my colds and flus usually followed the hot, humid, and rainy seasonal distribution of sickness around me. Not wanting to miss the opportunity to talk with grandmother Angela about her experience as a caregiver for her granddaughter following her daughter Karla’s migration, I pulled myself together with difficulty and made the trip across the city and up into the working-class barrio where her house is located. Sitting in our usual white plastic chairs in Angela’s neatly swept dirt patio, I found myself overwhelmed by nausea and unable to continue our conversation. Angela recognized my distress and swiftly directed me to her bathroom, telling me not to worry and to stay calm. Embarrassed to have brought my personal sickness and its attendant messiness into Angela’s tidy home, I tried to overcome my symptoms without success. Angela took control of the situation, recognizing my incapacity and kindly leading me into her bedroom, insisting I lie down and rest, and telling me not to worry, repeating, “Estás en casa” (You’re at home). After a few feeble protests and one last attempt to get up and get myself back to my rented room, I fell onto Angela’s bed and into a feverish sleep that lasted nearly the entire day. Every hour or so, I would wake to find Angela serving me a glass of homemade suero (a salt, sugar, and water rehydration remedy) or store-bought Gatorade. She would lay her hands on my head and stomach, pray softly, and encourage me by saying I would feel better soon and not to worry, I could stay at her house for as long as I needed.

Needless to say, I was vulnerable in those moments of sickness, physically weak, geographically distant from my own family and support system, and unable to help myself. Angela’s care was a practical and powerful remedy—the way she took care of me with such attentiveness left me feeling emotionally moved and immensely humbled. Later that evening, I finally felt strong enough to get out of bed, and I made my way into the living room, where Angela was seated with her granddaughters, Laleska, Alexa, and Reyna. Angela and the girls encouraged me to stay the night, but I insisted I should go home and soon left, departing with words of thanks and an embrace of gratitude. Angela’s granddaughters accompanied me to the street and, as I waited under a streetlight for a taxi, I reached into my bag and pulled out forty córdobas (about two dollars), handing it to the girls and asking them to give it to their grandmother to pay for the Gatorade she had purchased for me earlier in the day. The girls responded with a look both perplexed and disapproving. Thirteen-year-old Alexa broke the awkward moment of silence that followed by saying, in a serious tone belying her usually cheerful demeanor, “No, Kristina, esto no se puede pagar” (No, Kristin, you can’t pay for this).

This admonition brought to the fore a considerable cultural mistake—my instinct to monetarily compensate Angela’s care. My small gesture ran against the values of care that hold Angela’s family, and other transnational families, together. Ever the cultural student, I realized that Angela’s caregiving that day, just as all the grandmother caregiving I observed throughout my fieldwork, embodied the practical morality of everyday care, sacrifice, and solidarity that were incommensurable with monetary value. This incommensurability, embodied in Alexa’s exhortation, “No, Kristina, esto no se puede pagar,” contains a central entanglement of care in families of transnational migrants, in which migrant mothers often attempt to compensate for their physical absence by sending remittances but grandmother caregivers distance themselves from material interests, instead emphasizing the moral solidarity and sacrifice that sustains their caregiving. I return to these tensions throughout this book, attempting to unpack the various meanings and motivations of intergenerational care in Nicaraguan transnational families.

Humbled by Alexa’s admonition, I put my money away and boarded the next passing taxi, bidding the girls goodnight and telling them to thank their grandmother again for all her care. I drove home in a hazy, still-feverish, contemplation of the deep cultural value of care, of care’s ability to foster health and to forge relatedness in the face of human frailty and through the disruptions of transnational migration.

This book draws on an engaged ethnographic exploration of the lives of Nicaraguan families living with migration to illustrate how grandmother care is a powerful response to the troubles of transnational life. Intergenerational care is a practical resource for children and family well-being and a means of upholding cultural values for unity and togetherness, even as families are divided by time, distance, borders, and immigration policies. In the transnational families whose stories form the basis of this book, grandmothers take care of the everyday needs of children of migrant mothers through social reproductive labor—feeding, clothing, schooling, and nursing back to health—while simultaneously engaging in social regeneration by embodying moral values of sacrifice and solidarity through their caregiving. Grandmother care is thus a moral practice of caring about and caring for, over generations and across borders, that makes transnational family life possible.