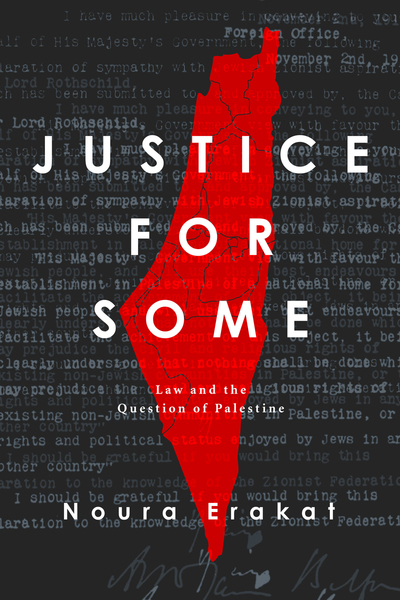 ON 23 DECEMBER 2016, the United Nations Security Council met to consider yet again an agenda centered on the “situation in the Middle East, including the Palestinian question.”1 The specific topic was Resolution 2334, which unequivocally condemned Israel’s settlements in the Palestinian territories. These settlements, the resolution reaffirmed, including those in East Jerusalem, lack “legal validity and [constitute] a flagrant violation under international law and a major obstacle to the achievement of the two-State solution.”2 The Palestinian delegation to the United Nations (UN) had been lobbying the Security Council’s fifteen members nearly all year.3 When it came time for a vote, 14 members voted in favor, zero members voted against, and the United States abstained. The resolution passed. This was no small feat.

The Security Council had reached some sort of formal decision on these settlements only twice before this moment, and the last time was nearly four decades before, in 1980.4 Since the passage of UN Security Council Resolution 242. U.S. administrations, from the Johnson administration on, have systematically undermined nearly all Palestinian efforts to internationalize its conflict with Israel. Between 1972 and 2017, the United States used its Security Council veto forty-three times to shield Israel from international censure.5 In 2011, for example, the Obama administration had vetoed an anti-settlement resolution similar to Resolution 2334.6

In 2012, the United States had opposed the Palestinian National Authority’s bid for statehood;7 in 2014, it tried and failed to prevent the Palestinian Authority from seeking the jurisdiction of the International Criminal Court;8 and in late 2014, it quietly crushed an effort to have the Security Council set a deadline for ending Israeli occupation of Palestinian territories.9 So in 2016, the United States’ choice to refrain from using its veto to obstruct Resolution 2334 was remarkable. For the first time in nearly four decades, it removed a primary impediment to the application of international law, and this should have, in theory, signaled a shift in the diplomatic treatment and international regulation of Israel’s settlement enterprise.

Two weeks later, in mid-January 2017, representatives from seventy countries convened in Paris for the Middle East Peace Conference, part of an ongoing effort to negotiate peace between Israel and Palestine. This marked the first opportunity the parties would have to leverage the newly established international consensus on the illegality of the settlements. Israel condemned the meeting and Resolution 2334 as threats to peace.10 It argued that both efforts failed to fully appreciate Israel’s position: Israel had not occupied East Jerusalem in 1967, the Israeli representative claimed, it liberated it.11

The conference closed with a commitment to the two-state solution and a reversion from an international and legal framework to a political one.12 Not even three months later, and in accordance with the resolution’s reporting requirement, the UN Special Coordinator for the Middle East Peace Process briefed the Security Council on Israel’s intention to build thousands more housing units in the settlements.13 The Council noted the development and did little more. The juxtaposition of the extraordinary passage of Resolution 2334 alongside the failure of an international conference to leverage it, as well as an increase in the number of settlement units in the resolution’s direct aftermath, tells a familiar story.

Throughout the course of the Palestinian struggle for freedom, international law has seemed futile, if not irrelevant. Since the First World War, serious legal controversies, including the disputes over the settlements, have characterized the question of Palestine. Yet, it has been the use of force and the balance of power—not judicial decisions—that have fundamentally shaped the realities on the ground. Given how history has unfolded, does this mean that the law is indeed irrelevant? Israel’s founding story and Palestinians’ dispossession seem to indicate as much.

Time and time again, we see evidence of the law’s assumed insignificance in the dispossession of Palestinians. Great Britain remained committed to establishing a Jewish national home in Palestine despite its legal duties as the Mandatory Power to shepherd local Arab peoples to independence.14 The Permanent Mandates Commission remained committed to the incorporation of the Balfour Declaration into the Mandate for Palestine, in contravention of the Covenant of the League of Nations, which, in discussing the disposition of the “communities formerly belonging to the Turkish Empire” stated that “the wishes of these communities must be a primary consideration.”15 The United Nations proposed partition of Palestine without legal consultation and in disregard of the existing population’s “well-being and development,” which the same Covenant had declared to be a “sacred trust of civilisation.”16 Zionist militias established Israel by force, without regard to the Partition Plan’s stipulated borders.17 The United Nations accepted Israel as a member despite that state’s violation of the nondiscrimination clauses of the Partition Plan and of the UN’s own condition that Israel permit the return of forcibly displaced Palestinian refugees.18

The very origins of the Palestinian-Israel conflict suggest that it is characterized by outright lawlessness, and yet few conflicts have been as defined by astute attention to law and legal controversy as this one. Do Jews have a right to self-determination in a territory in which they did not reside but settled? Are Palestinians a nation with the right to self-determination, or are they merely a heterogeneous polity of Arabs eligible for minority rights? Did the United Nations have the authority to propose partition in contravention of the will of the local population? Are the West Bank (including East Jerusalem) and the Gaza Strip “occupied,” as a matter of law, that is, are they recognized as such by the law? Does Israel have the right, in law, to self-defense against Palestinians living in the Occupied Palestinian Territories? Do Palestinians have the right to use armed force against Israel? Is the route of Israel’s Separation barrier, built predominantly in the West Bank, illegal? Is Israel an apartheid regime?

Enumerating a comprehensive list of the legal questions surrounding this conflict could span the pages of an entire book. Indeed, concern with them has produced several specialized legal journals.19 Significantly, however, none of these issues has been resolved by legal fiat, even as all parties have availed themselves of the law’s moral, political, and intellectual logic. What explains this conundrum of excessive attention to law in the conflict and the law’s seeming irrelevance in resolving it? What function is the law serving if not the expected one as an authoritative referee? This book’s inquiry begins here, with the desire to better understand both the present conditions of the Palestinian struggle for liberation and the role that law has played in furthering and in stunting the realization of that liberation.

I argue that the law is politics: its meaning and application are contingent on the strategy that legal actors deploy as well as on the historical context in which that strategy is deployed. This does not mean that the law is a political fiction. To the contrary, it has a life of its own and the capacity to influence, though not command, the behavior of state and non-state actors. While the imbrication of law and politics in the case of Palestine is exemplary of a global system, the sovereign exception that produced the question of Palestine demands particular attention to the potential risks, and benefits, of appealing to international law. In order to serve an emancipatory function, the law must be wielded in the sophisticated service of a political movement that can both give meaning to the law and also directly challenge the structure of power that has placed Palestinians outside the law.

This book explores five critical junctures in the history of the Palestinian struggle for freedom. The first of these explorations is unique in its breadth and purpose. It spans five decades in the twentieth century and provides a historical overview critical for understanding the subsequent four junctures. Not coincidentally, each of these subsequent junctures has followed some confrontation that recalibrated the regional and international balance of power, creating key moments of “principled opportunism,” or instances when actors were able to use international law as a tool; I refer to these moments as legal opportunities.20 Each juncture demonstrates how legal work shaped the meaning of law as a site of resistance or oppression, and how law thereafter structured the political framework regulating the question of Palestine.

The junctures are organized chronologically over a century-long arc (rather than thematically by legal norms, such as self-determination, occupation law, and laws of war) for two reasons. First, the chronological narration demonstrates how the meaning of law is responsive to the legal work of state and non-state actors and also to the historical context in which that work is being done.21 Looking at sequential episodes reveals that while the content of the relevant legal norms did not change across time and space, their meaning changed significantly. This variation can be attributed to the strategy of the actors doing the legal work as well as to the balance of military, economic, and normative considerations during each historical moment. It is for this reason that the book pays much closer attention to the details of these historical turns than to the content of the legal norms.

Second, the chronological narration helps to explain a history of the present of the Palestinian question. The legal work deployed during each juncture has had an enduring impact on how the international community diagnoses the conflict and imagines its proper remedy. These episodes demonstrate legal work’s impact in shaping the normative conceptions and diplomatic treatment of the question of Palestine. Overall, this approach enables us to trace how legal work has facilitated these junctures leading up to the present day.

3. Majed Bamya, First Counsellor at the Mission of the State of Palestine to the UN, interview by the author, New York, 23 October 2017.

11. Danny Danon, Israel’s Permanent Representative to the United Nations, lamented that the resolution impeded peace because it described Israel’s “presence in parts of Jerusalem in 1967 as a flagrant violation of international law.” Ibid.

15. Susan Pedersen, “The Impact of League Oversight on British Policy in Palestine,” in Britain, Palestine, and Empire: The Mandate Years, ed. Rory Miller (Farnham: Ashgate, 2010), 45; Covenant of the League of Nations, art. 22.

20. My concept of “legal opportunity” is based on Robert Knox’s definition of “principled opportunism” as the use of international law as “a mere tool, to be discarded when not useful.” He continues, “The strategic question of international law’s progressive potential is—as a matter of principle—reduced to the tactical, instrumental deployment of legal argument.” Knox, “Marxism, International Law, and Political Strategy,” Leiden Journal of International Law 22, no. 3 (September 2009): 433–34.