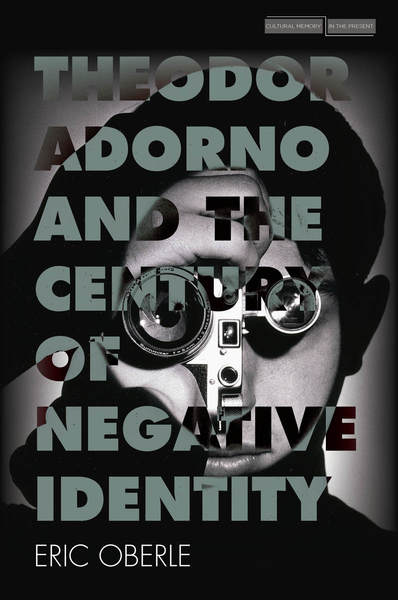 Theodor Adorno and the Century of Negative Identity
Eric Oberle

The Introduction narrates the rise of the identity concept in the twentieth century, arguing for a distinction between two types of identity. Just as Isaiah Berlin, following Erich Fromm, suggested the terms "positive" and "negative" liberty are necessary to understanding the double-sided logic of freedom in the modern world, the concept of identity must be approached through the tension between its "positive" and "negative" dimensions. Positive identity is familiar: the expressive, creative, and emancipatory language of what the self might become. Negative identity is its shadow: unwanted or imposed, rupturing the universal, expressing injuries inflicted on the self or imposed on others. Arguing that Adorno sharply criticized a one-sided, implicitly positive notion of identity, the Introduction establishes positive and negative identity's intertwinement from its origin, showing how Adorno's approach to this new language of selfhood offers an overlooked resource for understanding identity's complexity in the twenty-first century.

1 "Jazz , the Wound": Negative Identity, Culture, and the Shadow of Race
chapter abstract

Chapter 1 offers a revised interpretation of the infamous jazz controversy and Adorno's first confrontation with the idea of race and the American concept of culture. Chronicling Adorno's missteps in applying a theory of the commodification of musical universalism developed in Weimar Germany to the substantially different conditions of American society of the 1930s, this chapter reconstructs the political and cultural situations in which these essays were written and published. By examining the history of critical theory through the story of Adorno's understanding—and misunderstandings—of jazz and through Adorno's postwar consideration of his own Jewish heritage and that of the German-Jewish poet Heinrich Heine, this chapter explores Adorno's intellectual development in relation to the historical trajectory of twentieth-century attitudes toward culture between the worlds of ethnicity and the avant-garde.

2 America; or, the Stranger
chapter abstract

Chapter 2 looks at how Adorno's early experiences in America shaped his commitment to a Kantian vision of science, ethics, and universalism that would also accommodate individual expression, observation, and resistance. The chapter's central focus is an important 1940 lecture at Columbia. It explores how Adorno used Simmel's model of the sociological Stranger to understand America and American academic sociology's emphasis on assimilation and adaptation as the essence of truth and progress and also how, for an émigré scientist, personal alienation might lead to theoretical innovation. Considering what it meant for Adorno to be a Kantian Marxist and Nietzschean universalist, this chapter argues that during these years Adorno engaged with the problem of the relation between universalism and particularity in a way that laid the grounds for his turn toward the social dynamics of subjective identity in relation to racism and authoritarian politics.

3 Negative Identities of the Subject in Wartime America
chapter abstract

Chapter 3 introduces a long argument developed across Chapters 3 through 6. Examining Adorno's most famous, or notorious, philosophical work, Dialectic of Enlightenment (cowritten with Max Horkheimer), it challenges several persistent scholarly assumptions about Adorno's intellectual biography: that the war years marked a "retreat" from empirical research to theory; that the esoteric philosophical speculation of Dialectic of Enlightenment and Minima Moralia represented the "true" Adorno; that Adorno and Horkheimer were "pessimists" or "nihilists" during this period; and that the empirical study of The Authoritarian Personality was a distraction from Adorno's real concerns. Countering this narrative, these chapters argue that this period can all be read in terms of an ongoing attempt, when Adorno had become Horkheimer's closest intellectual interlocutor, to realize the work envisioned by the 1931 programmatic essay "Traditional and Critical Theory": creating a social-psychological model of interdisciplinary inquiry that devolved into neither positivism nor social Darwinism.

Chapter 4 explores how Adorno's work and that of the Institute for Social Research were shaped by a schism over the introduction of the term identity by its then most prominent theorist, Erich Fromm, in his 1941 Escape from Freedom. Showing how he articulated the language of identity as nonalienated subjectivity, which was almost immediately rejected by other members as Romantic and uncritical, this chapter argues that the struggle over the identity concept made the problem of subjective rationality a central concern for the institute; that it reshaped intellectual relationships within the institute, leading Adorno to become Horkheimer's chief collaborator; and that it set the institute on the path to developing a different understanding of its interdisciplinary project. It further challenges a long-standing misconception of the relationship between theory and practice in the institute, arguing for a dynamic interplay between private theorization and publicly engaged practical science.

5 Negative Modeling: Objectivity, Normativity, and the Refusal of the Universal
chapter abstract

Chapter 5 offers a reexamination of The Authoritarian Personality, the massive, multiauthored empirical study that constituted the capstone of Adorno's collaboration with American social scientists and the beginning of discussion on the study of prejudice, racism, and authoritarian politics. The standard account of Adorno's career suggests that the time Adorno spent on empirical psychological research was time lost for work on critical theory; it emphasizes tensions between Adorno and his American colleagues and implies that Adorno was ineffective at social-scientific collaboration. This chapter contests these myths by showing how Adorno's critical, multidisciplinary intelligence was important to this groundbreaking study's construction of Weberian ideal types for the study of racism: Adorno became a key architect of the way The Authoritarian Personality studied how irrational projection shaped society and politics while critiquing the false essentialism of race.

Chapter 6 concludes the story of how the confrontation with identity transformed the institute's theoretical concerns and shaped its career in America by showing how Adorno and Horkheimer arrived at a quite different understanding of the institute's interdisciplinary project than they had started with. This allowed them to articulate a new notion of social objectivity, reason, and legitimate authority that was explicitly understood as a negation of theories of subjective identity. In pure theoretical terms, it argues that Horkheimer and Adorno came to see themselves as defending an "orthodox" Freudianism and Marxism and a "heterodox" Kantianism and Weberianism. Politically speaking, the critical attitude toward the sciences of man contained in these orthodoxies and heterodoxies positioned Adorno particularly well to contribute to the reconstruction of postwar German culture.

The conclusion summarizes the philosophical value of exile, negative identity and non-identity. It considers why critical theory's invention of the concept of identity, and its subsequent philosophical negation, emerged out of the experience of exile and racism, and it reflects on this history and ideas should remain part of the problem of identity, the critique of science, and the notion of interdisciplinary analysis. Finally, the conclusion discusses the politics of Adorno and Horkheimer's return to Germany and the precariousness of their position within both the German academy and German society.