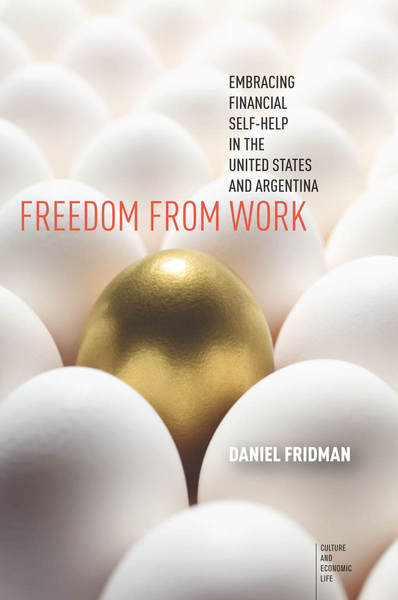 The introduction opens with the story of Guillermo, a street book vendor from Buenos Aires who, after some reluctance, became interested in the world of financial self-help. By interpreting Guillermo's biography, this chapter sets up the main themes of the book and outlines its basic arguments and theories. It argues that financial self-help is an instance of the production of capitalist economic subjects in contemporary post-industrial societies, and brings together the literatures on governmentality and performativity to argue that financial self-help is a neoliberal technology of the self. The introduction also describes the author's journey into the worlds of financial self-help of New York and Argentina, the main settings and characters that will appear in the book, and the methods used to gather evidence.

Chapter 1 defines contemporary financial self-help and distinguishes it from two of its closest relatives: general self-help and "get rich quick" schemes. It then turns to the diagnosis provided by Robert Kiyosaki regarding the end of corporate capitalism and of job security. His main premise is that, as a result of inertia, people fail to understand that the mainstream mobility path anchored in institutions such as higher education and employment does not make sense in this day and age. Kiyosaki also provides a theory of the class structure of capitalist societies (called the Cashflow Quadrant) that associates certain objective positions (employee, self-employed, business owner, and investor) with distinct forms of subjectivity. He suggests that individuals should understand what their position is and plan to leave positions in which they work for their money and move to those in which they receive money from the work of others.

2 It's Not About Money, It's About Freedom
chapter abstract

Chapter 2 dissects the widely used concept of financial freedom. In a discourse with roots in libertarianism, readers are urged to combat their conformist dispositions engendered in the welfare era and resist the temptation of security in favor of a quest for freedom. They are exhorted to fight external dependence on institutions as well as their internal dependence on conformity and fear, and to essentially control their selves, in a discourse that echoes that used in the addiction recovery movement. The chapter provides four examples that illustrate the notion of financial freedom: first, the rejection of family education; second, the rejection of the school system; third, the rejection of gurus who advocate frugality as a means of social mobility; finally, financial self-help's discourse on gender, which ties financial self-help to a long tradition of technologies of the self that combat dependency in women.

3 From Rats to Riches
chapter abstract

This chapter looks at the Cashflow board game and its players. First, through the practice of Cashflow, players acquire definitions of what being rich means in the context of financial capitalism and establish financial freedom as a specific goal. Second, they develop calculative tools adjusted to the idea of financial freedom and incoming rent (called "passive income"). Third, players work on the self by playing the game. They see themselves "in action," and identify what must be modified in their selves in order to produce the subjectivity that will lead them to financial success. The chapter also scrutinizes the translation that participants perform in practice in order to fit what happens in the game with what they call "real life." Through this translation, players alter a game that is often misaligned with reality in order to make it usable, frequently modifying the rules and even creating new game cards.

This chapter engages with the moral order of the world of financial self-help. Although the ethics of financial self-help appear to be about pure self-interest, there is space for generosity and disinterest in economic gains. While pure economic self-interest is not acceptable, pure generosity is deemed suspicious. This conflation of interest and disinterest rests on the notion that pure disinterest is a sign of a yet unchanged "poor" self. The rich, in contrast, live in a world of abundance in which there is enough for everyone, and therefore, the dual aims of interest and generosity are not contradictory. Two topics that illustrate this non-contradictory character of interest and disinterest are examined. First is what users make of the fact that financial gurus live off their fans. Second, the chapter looks at an economic activity closely related to financial self-help: multilevel marketing (MLM) companies.

This chapter addresses the transnational circulation of financial self-help. Financial self-help is a global phenomenon with its epicenter in the United States. But a great deal of local work is needed to make idiosyncratic American products work in the starkly different contexts of developing countries. Users in Argentina actively try to adapt the theories and advice to their more vulnerable (and less wealthy) economy and financial system. For many people, a scenario of financial instability only makes financial intelligence more important. In the face of difficult conditions, Argentines make use of American resources by disentangling the theories from the concrete applications. Financial self-help groups assist users in this quest to apply American ideas to the Argentine context. These social networks are as important as the products themselves, because by trying to solve the problem of adaptability, they make the products exportable.

The conclusion returns to some of the theoretical and political issues discussed throughout the book and suggests connections between the world of financial self-help examined in this book and the growing attention to financial literacy and entrepreneurship in policies by governments, NGOs, financial institutions, and international agencies.

The methodological appendix presents a reflection about the author's experience as an ethnographer in a world significantly different from his own. For a researcher, it is impossible not to go through some of the same anxieties and reflections that practices and discourses of financial self-help produce in genuine practitioners. Participants were people who shared ideas, performed practices, and constituted groups devoted to something that we all are somewhat forced to think about: our personal finances, our money, our jobs, and our retirements.