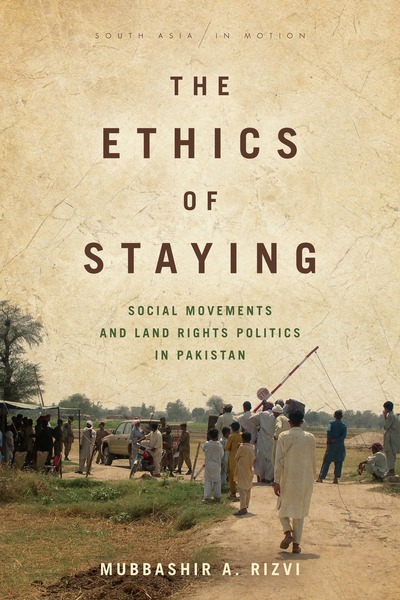 The Ethics of Staying
Social Movements and Land Rights Politics in Pakistan
Mubbashir A. Rizvi

This chapter describes the series of events by which a local struggle became a national event. It introduces the primary interlocutors and takes the reader to three different villages where the author conducted most of the interviews. These villages varied between the oldest predominantly Christian village, another predominantly Muslim village and a third largely mixed Muslim-Christian village in Okara district. It introduces the different occupational castes, the traditional forms of solidarity, and how these bonds of solidarity changed with the rise of the tenants' mobilization. It outlines arguments on the spatial history of rights, the provisional solidarities enabled by social movements, and the varied effect of NGOs and urban activists on rural grassroots mobilizations.

This chapter describes the political negotiation, ruptures, and innovations that allowed disparate groups of tenant farmers to come together across caste, gender, and religious differences and mobilize around a class identity as sharecroppers. The ethnographic analysis of AMP mobilization challenges the bifurcation of social movements between the "the politics of distribution" and "the politics of recognition." This chapter argues that the fate of social movements is forged by how they negotiate both sides of power. It argues that peasant movements foreground different concepts of political possibilities from their own alternative and deeply rooted traditions as refracted through social histories. Hence, AMP does not presume an organic, essentialist position that is sometimes projected onto indigenous or peasant communities, nor does it posit a utopian open future. The politics of AMP are provisional, based around tenants' ability to translate customary rights and obligations into political action.

This chapter looks at the regional history of canal colonization and provides a context for the establishment of military farms at the turn of 20th century Punjab. The canal irrigation projects ushered in a new era of regional modernity in Punjab with far reaching consequences for the relationship between land and people in this region. This chapter analyzes the formation of a distinct regional modernity in Punjab that brought the colonial state and peasantry in a direct relationship. It develops the classic theory of gift exchange to analyze the highly personalized relationship between people and colonial institutions that was created through large infrastructure projects that worked through dual idioms of modern technology and customary identities. This chapter illustrates how these dual links are appropriated and repurposed by tenant farmers to make claims over land.

This chapter examines the moral economy of land rights and the broader understanding of land rights politics as they are understood by different members of AMP. Land is one of the most important yet overlooked elements of social movements because it is often regarded as an economic resource, or exclusively as the object of contestation. However, the variation of land settlements, land relations, and the evolution of the property regime showcase varied cultural understandings of rights, value, and political subjectivity that is shaped by different conceptions of land rights. This abstract question also became an important source of discussion for the tenant farmers once they were able to occupy and cultivate their lands.

This chapter describes the subaltern meaning of land rights, which is different from the conception of rights based on citizenship and/or property ownership. This chapter argues that the central force of a social movement is ontological: it ushers a new way of seeing and relating to the world. Social movements have the ability to take particular issues and universalize them as a form knowledge and praxis. For instance, the AMP enlarged tenants' objections to cash contract farming into a discussion of land reform, citizenship rights, democracy, and human rights in Pakistan by relating them to a history of the hardships of settlement, the experience of partition, and the poverty of the sharecropping regime. This provisional political identity is built around a narrative that allowed the tenant farmers to bridge gender, caste, and religious differences. However, this provisional source of solidarity grew weaker as the tenants made some gains.

6 Solidarities, Fault Lines, and the Scale of Struggle
chapter abstract

This chapter examines the problems faced by AMP as the tenants' leadership allied with urban activists, civil society groups, and NGOs to gain publicity and visibility for their struggle. The aim here is to understand how scalability figures into subaltern politics of survival. The AMP subaltern and highly local articulations of land rights were represented in the abstract and universal framework of "Rights" favored by NGOs and "Class struggle" advocated by Left activists. These organization helped increase the visibility of AMP but they also created strong differences between the tenant farmers causing a split in the movement.

The conclusion summarizes the author's approach to the study of AMP as a relationship between land (spatiality), rights, and political subjectivity in Punjab. Rather than looking at the settlement of the Okara military farms or the rise of peasant mobilization in isolation, the author demonstrates the relational aspects of technology, territory, identity, and power in shifting relations of rule and political agency.