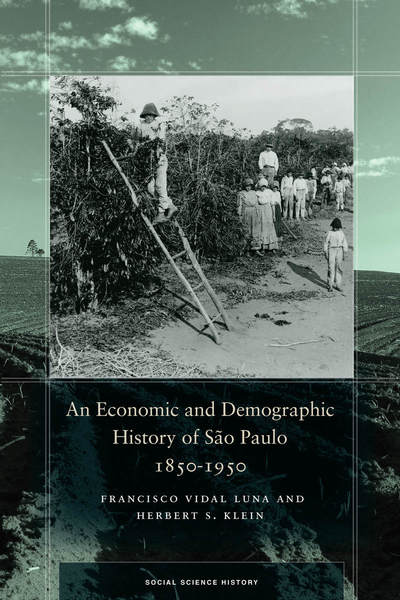 There is little question that the single most important change in the province of São Paulo in the second half of the nineteenth century was the introduction of coffee into the mix of sugar and food products. By mid-century, sugar and cotton were important local crops, but neither of these crops could replace coffee. The expansion of coffee is the single most important factor in explaining the extraordinary growth of São Paulo in this period. Understanding the dynamics of the coffee industry, its culture, the functioning of its market, and the relative position of São Paulo in the international coffee market is essential to understanding the history of the province in the second half of the nineteenth century.

Coffee had been cultivated in Brazil since the mid-eighteenth century. It arrived in the province of Rio de Janeiro in the last quarter of that century, and in the first decade of the nineteenth century a modest amount was exported to Lisbon. From Rio de Janeiro, coffee farms slowly expanded north and west into the province of Minas Gerais and south and southwest into São Paulo. In the province of São Paulo, coffee entered the northern portion of Vale do Paraíba, which the province shared with the neighboring province of Rio de Janeiro. This Paulista zone had the same natural resources as the surrounding region, which was then the largest producer of coffee in Brazil. At the same time, coffee production spread along the coast of Rio de Janeiro and reached the coastal towns of São Sebastião and Ubatuba on the northern coast of São Paulo. From there, production crossed over the Serra do Mar coastal range, entering other parts of the Vale do Paraíba. From its dominant position in Vale do Paraíba in the 1820s and 1830s, coffee then spread to the rest of the province and reached the interior plains in the final years of the nineteenth century. In turn this new zone became the main coffee-growing region of Brazil in the twentieth century.

To study the evolution of this rural economy from early in the nineteenth century, we examined censuses taken in each município, or county, of São Paulo from the late eighteenth century with some consistency until well into the nineteenth century.1 By 1829 there are enough of these censuses to form a rather complete picture of agricultural production in the province.2 These county censuses report that the province in 1829 had 40,000 households, of which 24,000 were dedicated to agricultural activities. Of these agricultural households, 7,000 possessed slaves. The remaining rural households relied on family labor, since in this period there were few wage workers in agriculture. Some 1,725 of these rural households produced coffee, and 61 percent of these coffee fazendas owned slaves (with just under 10,000 slaves working the coffee fields). The average coffee fazenda had fewer than 10 slaves, and only 60 coffee farmers owned more than 30 (two farmers had more than 100). Coffee fazendas were concentrated in Vale do Paraíba, especially in the município of Areias and on the province’s northern coast. In this same year there were 585 farms producing sugar in the province, and they owned 18,000 slaves, for an average of 31 slaves per sugar mill (engenho). Another 316 farms produced aguardente (cane alcohol) from sugarcane. Of these 316 farms, 84 percent owned slaves, for an average of a dozen slaves per estate. These sugar and alcohol producers were concentrated in the Central region of the province, especially in the municípios of Porto Feliz and Campinas.3 Of the 24,000 farms listed in the province in that year, 8 of 10 also produced food crops.4

By 1836 there existed the fairly complete census compiled by Daniel Müller, which provides data on both population and farm production.5 Although coffee production was expanding rapidly by this date, corn still represented half the value of provincial agricultural output. In fact, products grown for the domestic market (corn, rice, beans, and aguardente) represented close to two-thirds of the value of total agricultural production. Coffee accounted for only 20 percent and sugar for 14 percent of the total. There was even some production of tobacco and cotton in the province. Clearly, Vale do Paraíba and the Central region were the most important growing areas, accounting for 81 percent of the value of all crops produced in that year. In these two areas resided 72 percent of the free persons and 79 percent of the slaves. As in 1829, coffee production was still concentrated in Vale do Paraíba region (87 percent) and sugar in the Central region (91 percent).

Almost two decades later, an 1854 census prepared by José Antonio de Saraiva showed that coffee production had attained much greater importance in the province.6 In that year the coffee crop was 3.4 million arrobas, the equivalent of 50,827 metric tons, or 847,000 sacks of coffee at 60 kilograms per sack. This was seven times greater than the crop harvested in 1836. Sugar also increased in the same period, by 50 percent, but coffee now represented six times the value of sugar production. In 1829 coffee estates had 10,000 slaves, and by 1854 they contained 50,000 slaves. Coffee also now had 2,000 colonos, or free immigrant workers, helping produce the crop. As Nabuco D’Araujo, the president of the province, noted in 1852, coffee was prospering and promised a great future. He declared that “changing the cultivation of sugar for coffee and tea is a natural trend for our farmers,” not only because coffee was easier to produce and paid higher returns but also because it was easier to transport over the very poor roads of the province.7 The poor quality of roads was a fundamental restriction on the São Paulo economy. Few wagons could navigate them, which meant that the primary form of transport of persons and goods was mule train. Aside from the usual difficulties these poor roads created for movement within the province, an additional difficulty was accessing the main port of Santos. The main Paulista agricultural region then in production was at an elevation of 700 meters, with a complex and difficult path leading down to the port of Santos, which was about 140 kilometers from the county of Campinas, a major agricultural production area in the nineteenth century. Thus, creating a comprehensive transport system in the second half of the nineteenth century was crucial for the provincial government.

Despite the major growth of coffee production in two decades, little changed in the regional concentration of coffee fazendas: Vale do Paraíba contained two-thirds of them, and the Central region was second in importance. Sugar was still concentrated in the Central and Mogiana regions, but unlike with coffee, there were no colonos on the sugar plantations, and the average number of slaves per producer was less than in 1829.8 Because mules were the primary transport for moving all crops to port, coffee fazendas had 22,000 mules and sugar estates had another 13,000 (Table 1.1).

In 1854, Bananal, Taubaté, Pindamonhangaba, and Campinas were the most important coffee-producing areas (see Map 1.1) and accounted for half the production of the province.9 Bananal, with an average fazenda output of 116 metric tons, was the largest producer, compared to an average of 19 metric tons in the province as a whole.10

Sugar was less distributed throughout the province. The ten counties producing the most sugar accounted for 96 percent of the crop, whereas the ten counties producing the most coffee accounted for only 73 percent of total production. The four counties of Mogi Mirim, Itu, Piracicaba, and Capivari produced almost three-quarters of the sugar. Itu had more fazendas (164 out of a total of 665) than any other município. Mogi Mirim generated the largest output per fazenda: 3,334 metric tons of sugarcane, or 58 metric tons of sugar, compared to an average of 19 metric tons per fazenda for the province. Campinas had the highest average (45) of slaves per fazenda (see Table 1.2).

Unfortunately, the 1854 census does not provide data on other crops, but it does give information on ranching. The province had 532 ranches, which is probably an undercount. These cattle ranches had 4,342 slaves and 1,767 agregados (free wage workers) who raised 24,000 head of cattle in that year. Population, as could be expected, was concentrated in the same zones as the major agricultural crops and farms. The Central and Vale do Paraíba regions accounted for almost two-thirds of the provincial population (see Map 1.2).

By mid-century coffee and sugar were thus firmly established in the province. But despite the existence of large virgin territories propitious for coffee production, expansion of coffee was limited by two key factors, shortage of labor and a very precarious system of transport, which made farming at any distance from the coast far too costly to be commercially profitable.

The end of the Atlantic slave trade in 1850 created a serious labor constraint on expanding coffee plantation agriculture. Although the province already had a large slave population by this time, and there would be internal transfers of slaves from less developed centers within Brazil, the end of the trade put into question the future of slave labor. This explains the first attempts to import free immigrant labor to coffee estates as early as the decade of the 1850s. But these two forms of labor were incompatible, and efforts to exploit the free wage laborers more systematically led to intense conflict.11 The new plantings in the interior plains were the most affected by the scarcity of labor, and it was in that region that the first attempts were made to use free wage immigrant laborers. These early efforts failed, and planters continued to make systematic attempts to find a solution to the labor question.

The gradual transfer of slaves from other activities and other regions temporarily solved the demand for labor, but this supply was insufficient to meet the growing demand from the expanding coffee fazendas. Moreover, the transfer of slaves from the Northeastern provinces to the south was the subject of intense debates because of the economic and political consequences of this migration. On the one hand, it weakened the sugar economies of the Northeast because of the loss of labor, and on the other hand, it reduced Northeast support for slavery. The leadership of the Northeastern provinces was opposed to the interprovincial slave trade and demanded that the parliament prohibit it. But the initial debate led nowhere, and the trade continued. It was not until 1871, with the enactment of the Law of Free Birth, that the issue was again raised. The law declared that all children born after the enactment of the law would be free but remain under the control of their former masters until they reached age eight. Despite the massive loss of slaves to the south in this decade, the conservative leadership of the Northeast did not oppose the Law of Free Birth, which showed how the institution of slavery had lost its importance there. As the historian Evaldo Cabral de Mello has noted, the interprovincial slave trade represented for the Northeast “abolition with indemnity.”12 This change in attitude by the other provinces caused serious concern for the southern coffee elite such that in the 1880s, when the parliament still refused to prohibit the trade, the principal slave-importing provinces imposed heavy taxes on imported slaves and prohibited new transfers of slaves from other provinces.13

1. These censuses were called either “mappas” or “Listas Nominativas dos Habitantes” and can be found in the Archive of the State of São Paulo.

9. Bananal, Taubaté, and Pindamonhangaba are in Vale do Paraíba. Campinas is in the Central region.

10. Bananal is a município created through the division of the county of Areias. Before this, Areias was the major coffee producer in the province.