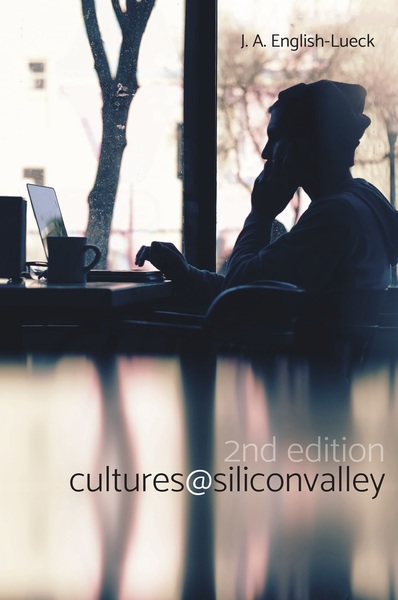 It is dawn in the Mission District in San Francisco, a city being absorbed, inexorably and reluctantly, into Silicon Valley. Even ten years ago, San Francisco would have denied being part of the technology engine at the south end of the Bay, but over the past decade it has become integrated. The area known as Silicon Valley over the last fifty years has fluxed and expanded from its beginnings in the 1970s. Anchored to a strip of the South San Francisco Bay that contains Sunnyvale, Mountain View, and Palo Alto, the Valley has crept north, and east. As the Internet-based economy has gone mobile, shareable and embedded in things, San Francisco has been swept into the mix, with tendrils of technology work stretching out to the East Bay, to Berkeley and Oakland.

Taavi is still asleep in her multiroom apartment that she shares with one of her partners, who is also “in technology,” affording her the luxury of living close to where she works. Taavi is not a morning person. She is a software engineer, an artist, and she is part of the network of start-ups and new companies in San Francisco that focus on social media and the shareable economy. She wakes around eight o’clock, has some coffee, and takes the twenty-minute bike ride to her job. Traffic in her part of San Francisco is a nightmare, and riding the bike not only wakes her up but helps her avoid the morass of cars fighting for parking. She hoists her bike onto a bike parking space on the wall of her workplace. One of the other bikes decoratively sports houseplants. Taavi begins the day gently, taking the easy jobs first, reading and responding to e-mail. She needs to work her way back into the code that so occupied her mind when last at work. Coding requires intense concentration, an almost out-of-body experience. During lunch and after work Taavi is active in the political discussions of her workplace. Company members are conscious that they both need the materials generated by their users to share and are the stewards of that community. What kind of community do they want to foster? These discussions draw on her background in gender studies, and she contributes a nuanced voice to tough issues of gender, sexuality, and privilege in the high-tech world.

Isabella, like Taavi, is a younger woman. San Francisco attracts a statistically younger workforce than the older companies to the south. Isabella works at an outpost, a worksite intentionally placed in Silicon Valley by a mature brick-and-mortar company in order to learn how to function in a mediated, technologically saturated world in which information networks are used to promote brands. With the assumption that new directions in project development or services are more likely to come to light in small start-ups, rather than staid older models, companies that produce traditional twentieth-century products and services, along with nonprofits and even governments, have set up such outposts to mine Silicon Valley’s innovations. Isabella is part of a multinational organization based in Europe, and her role was to be the pioneer who came to found the outpost and make it a successful venture. Her outpost is now the site of rotating placements, as people from different parts of the global company are sent in to learn how the Valley works. Isabella has to get up very early in the morning, at least 6 a.m., to interact with Europe in real time. Her calls and online interactions might last until 9 a.m. Now, she is ready to bike to her job in a coworking space in the heart of San Francisco. Isabella says, “I bike everywhere, that’s my European trait. I couldn’t leave that.” Isabella is one of the foreign-born residents who constitute 37 percent of the population of greater Silicon Valley. Her coworking space is a long wide corridor, designed to provoke interactions and “serendipitous encounters” among the sixty or seventy start-ups that rent space there. Most of Isabella’s work for her “mother ship” back in Europe consists of networking, so she spends her morning connecting to people on e-mail and going to meetings. She will plan on going to lunch at one of the many cafés around her coworking space to have more intimate face-to-face meetings. The deli in the high-end grocery store nearby is particularly useful. She hopes she won’t have sandwiches. Isabella jokes, “Americans eat too many sandwiches!” On the street, tourists walk by, taking photographs on their phones of the trendy corporate logos. What is better to tweet than the Twitter sign to those back home?

Aberto, a native of the Bay Area, is experimenting with coworking on an even more intimate level; his whole house is a coworking space dedicated to interesting people working on blockchain technology. Aberto is an economist, and since blockchain technology underpins bitcoin, a radical experimental currency, he is living there as a participant observer. This publically distributed digital ledger, a virtual and dispersed account book, enables databases to be created that are secure from tampering or revision. Aberto wakes up a little tired. He was up late engaged in a discussion, with just a hint of party, with his housemates about various philosophical ideas related to a future that could unfold with this new technology. At its best, blockchain has the potential to create unbreakable interactions that cannot be changed, tweaked, or unmade. It was a heady night. Of course, it might be just another passing technological craze, subject to frenzied investment followed by more sober consideration. As an economist, and a socially conscious native of the area, he is concerned about the inequality evident around him. While he hopes the technologies being imagined here will provide tools to the disenfranchised, revolutionizing voting, commerce, and even citizenship, he suspects they will be put to much more frivolous uses. Only occasionally is that topic openly discussed. In the meantime, people come from all over the world to stay at the house for different periods of time, exchanging ideas in the living room, sitting side by side with laptops ready, eventually moving on. More permanent housemates might be on the road to Asia or Europe. Aberto is never quite sure who is actually living there at any given time.

Aberto goes out to the porch to watch as the sun comes up, drinking his strong coffee. He is once again amazed at the magnificent view of San Francisco afforded from his group home. As Aberto moves downstairs, he has to be quiet. Jack, an engineer working on artificial intelligence and the “Internet of Things” has a start-up in the basement. He often sleeps there as well, working unpredictable hours. It’s a good thing Aberto had clean laundry. The washing machine is in the basement as well, and members of the household must insert that mundane task into their own unpredictable work schedules. Unlike many of his housemates he has a day job in Palo Alto and needs to ride his bike to the train station to make his way to his other worksite, taking advantage of the commuter train’s wifi network to do just a bit of his work. Commuting by car between “the City” and the older heart of Silicon Valley is horrendous. No longer does U.S. Highway 101 have a crowded commute and less populated counter-commute. Both directions overflow with vehicles, unless you depart well before dawn. High housing costs and a high churn rate, the rate at which companies come and go, mean that few people live where they work. Low unemployment and restricted housing availability translate directly into more vehicles on the arterial freeways. Economic busts are sensed vicariously as the highways and freeways empty, as people leave the region or stay at home looking for work, getting another degree, or starting a business. Right now, the traffic is frenetic as the scramble for housing and jobs means that the cultures of Silicon Valley are again in motion.