STANFORD
UNIVERSITY PRESS
Ninette of Sin Street
A novella by Vitalis Danon, Edited with an introduction and notes by Lia Brozgal and Sarah Abrevaya Stein 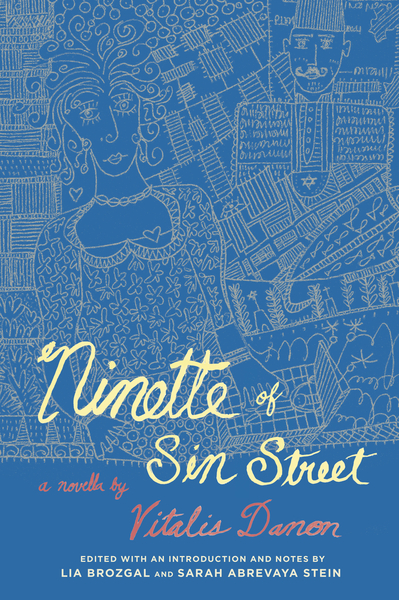 Ninette of Sin Street
A novella by Vitalis Danon, Edited with an introduction and notes by Lia Brozgal and Sarah Abrevaya Stein

Ninette of Sin Street tells the story of a destitute, illiterate, unwed Jewish mother living in Sfax, Tunisia, in the 1930s. While compelled by her circumstances to work as a prostitute, Ninette dreams of a better life in a respectable neighborhood, and an education for her son, Israel. Plucky and street-wise, Ninette enrolls Israel in the Alliance israélite universelle school—a French-based organization devoted to the education and civilization of Jews living in the Levant. The tale is told from Ninette's point of view, over the course of her visits to the school's director to check on her son's progress. A colorful first person monologue, Ninette is the story of an ordinary woman and her tribulations, but it is also the story of provincial Tunisia under the French protectorate, of the AIU and its mission, and of a bygone multilingual, multicultural world.

3 Appendix A: A Flaneur in Sfax, 1918
chapter abstract

Danon's letter to his director strikes an intimate tone, reflecting his zeal for his chosen profession, and his fascination as he explored Sfax for the first time. Meandering through the city, Danon observes it through the lens of Orientalist literature and art—his eyes are drawn to the winding streets, the "violent" colors of the open market, and the artisans (Jewish as well as Muslim) producing traditional crafts by hand. From the chaos of the city Danon retreats to his books and meditations. Danon's letter itself might be read as a classic Orientalist tract, were it not for the complexity of his identity and origins; as a fellow Mediterranean Jew, he was a product and protégé of the very civilizing mission he would offer his students. This letter appears in print for the first time.

2 Appendix B: A Visit to the Jews of Djerba (Travel Notes), 1929
chapter abstract

During his years as an AIU director and teacher, Danon penned a number of sociological and anthropological essays in addition to his fiction. In 1929, Danon travelled from Sfax to the Island of Djerba, home of the oldest Jewish community in North Africa. In vivid detail, he describes the journey by ferry, his first site of the island, the people and customs he encounters there. Danon travels to Djerba with a head full of myths; once on the island, he is startled, seemingly in equal measure, by the poverty and hospitality of his Jewish hosts. The visit prompts Danon to reflect on his own status as a "Westernized" Ottoman Jew. This is the first time "A Visit to the Jews of Djerba" has appeared in English.

Danon travelled from Sfax to Gabès in order to obtain support from Gabès' rabbinical leadership for the establishment of an new Alliance Israélite Universelle school in that city. Danon arrived in Gabès as an emissary of French Republicanism and Jewish liberalism, and his perspective on the local community reflects both his ambition and his prejudice. In his eyes, Gabès' Jews are isolated, poor, persecuted, and ignorant; its rabbi an overstuffed and unyielding traditionalist detached from his community and blindly invested in Jewish learning; and the community as a whole a miniature and diluted version of the ancient Jewish community of the Island of Djerba, located just 90 kilometers south of Gabès, and long the source of Gabès' religious leadership. This letter appears in print for the first time.

In this letter, written to the AIU President in 1963, Danon reviews his career and reflects on his achievements, and those of the organization, in Tunisia. Tunisia had been an independent nation for seven years at the time of Danon's writing; he was 72 and but six years from his death. In this letter, Danon represents himself as "one of the last remaining witnesses to the miraculous accomplishments" of the AIU. Strikingly, the letter does not only laud the AIU's successes (as well as Danon's own), but also bemoans its many challenges, including chronic underfunding. Among the achievements that Danon draws attention to is his writing, including a two-volume history of the Jew of Tunisia and the sociological studies of the hara.