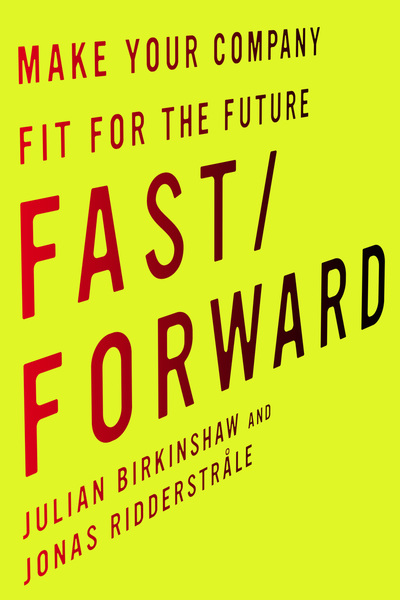 In today's highly competitive business world, every company is looking for an edge, a source of differentiation over their rivals, and every leader is seeking to make his or her organization the best it can be. An industry of consultants, academics, and journalists has grown around this set of aspirations, and the diversity of insights and advice on offer is huge.

One common theme, found among the most influential books in this field, is the notion that there are enduring sources of advantage, eternal truths if you like, that the most successful companies and the best leaders have figured out. By understanding and applying these “secrets of success,” the argument goes, your organization can also become excellent; it can make the transition from good to great.

In this book, we take a different view on corporate success. We argue that the formulae for success that worked in prior decades offer only very limited insights into what might work in the future. This is because the business context keeps changing: not in the banal sense that we face increasing levels of technological change and higher levels of competition, but rather in the more fundamental sense that every source of competitive advantage carries with it the seeds of its own destruction. This is a version of the famous “Icarus Paradox”: the attribute or capability that makes companies successful in one era makes them susceptible to failure in the next era.

This alternative view puts a heavy burden on corporate leaders. It demands that they make sense of how the world is changing and figure out what the consequences of those changes might be in the years ahead; it then requires them to make changes in how they work that take them into unknown territory, without proven “best practice” models to follow.

The companies that succeed in doing this have the potential to gain an evolutionary advantage. The conservatism and inertia inside your typical large organizations means that the rate of change outside is usually much greater than the rate of change inside. Corporate generals continue to fight the last war, using structures and methods that were designed for the previous era, and endorsing plans that are linear extrapolations of what worked before.

What we need instead is for companies to figure out how to make the rate of change inside at least as rapid as the rate of change outside. This, ultimately, is what the book is about. Fast/forward companies have an evolutionary advantage; they are fit for the future. Fast needs no further explanation—it simply refers to the need for decisiveness and a strong action orientation across the organization. Forward has two meanings—it is about a direction of travel that looks to the future rather than the past, but it also hints at the need for leaders to make a stronger emotional connection to those around them, rather than allowing sterile, big data-driven decision making to dominate their actions, reactions, and responses. Fast/forward companies, in a nutshell, are those that exhibit decisive action coupled with emotional conviction.

Origins of the Book

We started work on this book almost three years ago, and in keeping with our notion of evolutionary advantage, it changed shape significantly over this period of time. The core themes in the pages that follow emerged from two separate strands of thinking.

The first is a deep interest in paradoxical thinking. A paradox is a seemingly contradictory statement that reveals a profound insight. Jonas had developed a fresh perspective on the way the business world is changing around the four “paradoxes of progress,” featured in Chapter 2 of the book. For example, the exponential growth in knowledge at a societal level means that each of us is becoming, relatively speaking, more ignorant at an individual level. This has important consequences for how we harness knowledge;—we can no longer rely on the lone genius inventors. We need instead to become much better at knowledge pooling and collaboration. Separately, Julian had also developed a point of view on a paradox, in terms of the difficulties companies face in exploiting their existing sources of advantage while also exploring new opportunities, as we discuss in Chapter 8.

This paradoxical point of view was instrumental in sharpening our understanding of the big challenges companies face today. Much of the current discourse is about business analytics and big data, and more generally about the value of higher-quality information as a source of advantage. But it seemed clear to us, as we reflected on this debate, that the information revolution was already carrying the seeds of its own destruction, with information no longer being the scarce resource it used to be and with search costs close to zero. The more companies invest in information, we propose, the less valuable (as a source of differentiation) that information becomes, and the more other attributes, such as flexibility, decisiveness, and commitment, come to the fore.

The other strand of thinking on which we lean is one that we had first started work on in the late 1990s when we were colleagues at the Stockholm School of Economics, working under the guidance of the late Gunnar Hedlund, to whom the book is dedicated. Our research at that point in time was focused on how large multinational corporations were organized; we were fascinated by the way in which alternatives to the classic hierarchical way of working were starting to emerge. In studying myriad companies, we came to realize that their formal structure was not really their defining quality. Equally important were the systems used for creating and sharing knowledge among people, and also the informal means by which people were inspired to get things done or to take initiative. Already present in our thinking was the distinction we make in Chapter 3 between bureaucracy, meritocracy, and adhocracy as different models that capture the obvious and hidden aspects of organizational design. Understanding and deploying the full menu is a secret weapon for making progress in the face of paradoxes.

In other words, by putting these two lines of thinking together, we had a genuine “aha” moment. They are, in fact, two sides of the same coin: the challenges we face on the one hand and the big strategic tools we need to wage today’s and tomorrow’s corporate wars on the other.

But Fast/Forward does not fit neatly into the usual business categories. It is about “strategy,” but also organization, management, and leadership. If you want to create a company that is fit for the future, you need to work across these levels. The lines are blurring, and we’re not that interested in maintaining them for the sake of appellation. To put it slightly differently, fast/forward is a state of mind—it is a way of making sense, a lens through which to see more clearly. If you get the basic design right, we would argue, you can tap people across the firm to take responsibility for adaptability and as a collective make your company fit to face your own paradoxes. Are you ready to let go of the wheel or, rather, hold it with all of your workforce? Let’s see.