STANFORD
UNIVERSITY PRESS
How to Be Sort of Happy in Law School
Kathryne M. Young 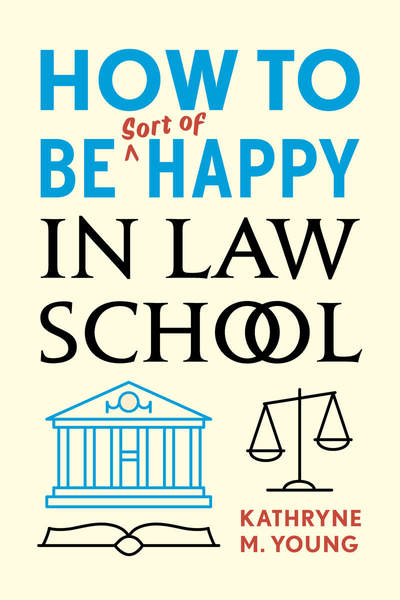 How to Be Sort of Happy in Law School
Kathryne M. Young

Acknowledgments
Contents
Excerpt from the Introduction

Why I Wrote This Book

For the majority of the time I attended my nondescript public high school in California’s San Joaquin Valley, Mock Trial was my saving grace. At the end of my sophomore year, my Mock Trial coach, Paul Horvath (a talented and thoughtful teacher, as well as a former public defender) gave me a copy of Gideon’s Trumpet by Anthony Lewis. It was the most amazing book I had ever read. From then on, I wanted to represent indigent defendants in criminal cases: to fight for the poor and defend the U.S. Constitution one pretrial argument at a time.

I went through my undergraduate years undeterred from this goal, sometimes wishing I could skip college and go directly to law school. During my four undergraduate years at Stanford, I constantly hung around the same law school I would eventually attend. I ditched required humanities lectures to sit in on Criminal Procedure, I studied in the law library, and I wrote my American Studies honors thesis about the cross-examination of expert witnesses. So when I applied to law school, I thought I knew exactly what I was getting into—that if anyone would love those three years, it would be me. After getting in, I deferred—once to start a college prep office at my old high school, then again to study creative writing at Oregon State University. Then I returned to Stanford to launch the legal career for which I felt destined.

But there was a problem: To my great surprise, I disliked being a law student. This realization descended on me with alarming swiftness and certainty. What was wrong with me? Had I been naive? Somewhere along the line, had I stopped asking myself whether this was still what I wanted to do? Had I been too scared or stubborn to change my mind?

Still, I could have turned back. I could have quit law school and paid back that first semester’s $30K of debt little by little, working as a barista or a bodyguard. I could have led kayaking expeditions in Maui or Mauritius, tanning myself and peeling mangoes in the sun. But I stuck with law school, and although I was miserable sometimes, I also ended up having some incredible experiences—amazing, fulfilling moments when I loved what I was doing. Law school introduced me to some of my favorite people. It put me in touch with aspects of the world that left me perplexed, jaded, and maybe a little smarter. It gave me the expertise to do pro bono work I enjoy. And it deepened my knowledge about some of my favorite topics to research and teach. Plus, I am happy in my current life, and law school helped enable that life, which makes it difficult to regret finishing my JD.*1

You might wonder why someone who did not like being a law student would write a book about law school. For one, I wanted to share things I wish I could have read during law school—to tell students what I would have liked to know. For another, I believe in the law school endeavor, despite its flaws, and in the potential of the legal profession to be a source of transformative social change. Lawyers are short- and long-term problem solvers. At their best, they make life better, helping people draft contracts, acquire businesses, and patent ideas. They make playgrounds, hospitals, and prisons safer. They defend our constitutional rights. They put dangerous people in jail. The law is society’s skeletal structure—the bare bones of how we create rules and procedures for behaving toward one another. Lawyers keep these bones in working order. Ideally, problems and conflicts are solved at the flesh-and-blood level. But this is not always possible, and lawyers make sure the basic skeletal framework stays intact during times of crisis.

Sure, this is an idealistic view of lawyers. But I am an idealist. I believe law and lawyers can do great things. However, a lot of people go to law school with an inaccurate sense of what those three years will be like. All kinds of forces shape them in ways they did not expect, and not always in ways of which they are proud. Many lawyers-in-training lose something of themselves along the way, but I do not think this loss is inevitable.

Some of law school’s problems are systemic and need to be addressed by law schools themselves: by law professors, curriculum committees, bar associations, and the like. Those problems are not the focus of this book. Instead, I am interested in what law students can do at this moment to make their experiences better.

I became a sociologist during law school (at least formally; in some sense, we are all born sociologists). Halfway through my 1L year, after hearing me ask questions like, “Don’t financial incentives in the indigent defender system systematically disadvantage poor people?” One of my professors gently suggested that my areas of interest were fundamentally sociological and proposed that I apply to Stanford’s JD/PhD program in sociology and law. So I did. I had never taken a sociology class, nor was I entirely sure what sociology was. I just knew that law school was not working for me, so I figured I had little to lose. Sociology proved a good fit—and once sociology was in the mix, law proved a better fit, too.

Working toward my JD and PhD concurrently after my 1L year gave me a new perspective on law school. I stuck around Stanford Law School for six years after my law school class graduated, finishing my PhD, then doing a postdoc. During that time, I became fascinated with the institution of law school and the social systems within it. I watched the law school transition from semesters to quarters, and from a system with letter grades to a system without them. I watched a massive student housing complex go up, as well as a new law school building. Clinics were founded, courses created. People were hired; people retired. I got to know staff members, librarians, and custodians. I talked to professors about their classes and their students. TAing Constitutional Law and Evidence, as well as co-teaching a law school course, gave me a chance to see my former peers through teachers’ eyes. I watched annual waves of 1Ls come into law school, struggle, succeed, do OCI (or not), try to get on law review (or not), fall in (and sometimes out of) love with each other, and begin their first jobs. I kept in touch with alumni and often asked them to reflect on law school. I did all of this because I found law school fascinating, and as an ethnographer, I was interested in the social mechanisms that underpinned it.

1. Or maybe this is all cognitive dissonance—that merciful force that works mightily to align our brains with our actions, helping convince us that everything works out for the best. We are hard-wired to guard ourselves against regret.