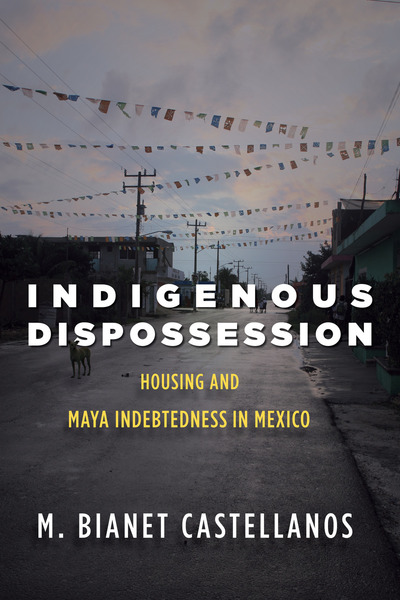 The central argument of this book is that as Indigenous migrants move to cities, they are no longer treated as Indigenous and instead become deracialized subjects who are disciplined through neoliberal instruments of debt, like mortgage finance and credit cards, leading to greater economic precarity and a loss of autonomy from the state. Through an ethnography of Maya migrants living in Cancún, one of Mexico's fastest growing cities, I show that Maya migrants' struggles to own a home reveal the colonial and settler colonial structures underpinning the city's economy, built environment, and racial order. As they grapple with predatory lending and foreclosure, Maya families cultivate strategies of resistance, from "waiting out" the state to demanding recognition as Indigenous peoples in urban centers. Through these maneuvers, Maya migrants forge a new vision of Indigenous urbanism that counters a discourse of urban malaise and articulates dignity with democracy.

1 Before Housing Reform: The Gendering of Urban Property
chapter abstract

Chapter one maps out the history of land policies in Cancún and how they have been shaped by ideologies of family, gender, and citizenship. By excluding migrants who were unmarried and childless from affordable housing and land programs, the state defined citizenship narrowly and encouraged migrants to embrace the nuclear family if they wished to become citizens of this new urban space. In response, Maya women mobilized their status as wives and mothers to lobby for land.

Chapter two examines the transformation of Mexico's land distribution policies and property rights through a discursive analysis of the ideologies central to government campaigns promoting "dignified" housing. Analyzing news articles, government campaign documents, and one Maya family's response to these campaigns, I examine the narrative devices and rhetorical strategies used to make housing attractive and to align debt with national ideals. The language of patrimony and suburban domesticity is intended to soften the retreat of the state from land redistribution, and makes palatable and desirable the process of going into debt on a much larger scale than previously possible.

3 After Housing Reform: Credit as the New Frontier
chapter abstract

Chapter three analyzes Indigenous migrants' willingness to take on debt. Prior to 2000, Maya aspired to own, but without debt. Homeownership has increased Maya migrants access to credit, making them the "new frontier" of capitalism. But it has concomitantly increased their economic risk. It considers how credit and risk take on a gendered and "moral valence." For male migrants, going into debt to purchase a home is a risky venture that ignores lessons learned from Indigenous experiences with debt servitude. Yet for female migrants, owning a concrete block home has become a sign of progress and security from natural disasters. To tease out this moral, cultural, and gendered dilemma, I examine migrants' experiences with microfinance and credit cards.

Chapter four centers on one Maya family's experience with foreclosure. How do Indigenous peoples cope with this loss and how does it (re)structure their attachments to place, land and nation? Even as housing reform becomes a form of discipline to produce new types of citizens and construct new narratives of progress, debt delinquency, and insecurity, I show how migrants' resistance strategies, from foot dragging to legal suits to postponing foreclosure, are transformed into a process of "waiting out" the state and capital. In so doing, Maya migrants sidestep the bureaucratic measures created to regulate the poor and convert consent into provocative acts of obstruction and defiance.

Chapter five examines the case of Maya migrants who reject social housing and instead opt to live in the squatter settlement of Colonia Mario Villanueva. Social housing, Maya migrants argue, entails great risk (due to mortgage debt) and is rife with social atomization. In contrast, life in Colonia Mario Villanueva is organized around the principles of Indigenous communal land practices. It is centered around the colonia's legal battle to avoid eviction, which was led by Maya women. These women relied on strategies of resistance derived from Indigenous land struggles. Colonias are perfect places to cultivate political subordination, but in the case of Mario Villanueva, they also become spaces of insubordination.

The book concludes by assessing how Indigenous migrants have fared under housing reform. Galvanized by the parallels between their ancestors' struggle with esclavitud and their own land and housing struggles, Maya migrants demand to be engaged as Indigenous and accorded the rights to land and self-determination. Migrants urge us to engage with a more expansive conception of territoriality, one that is not limited to the land boundaries of rural communities but is broad enough to recognize the peninsula's sacred Maya geography and to encompass Indigenous diasporas in urban centers. Through this articulation, they offer a more dynamic interpretation of Indigenous rights that aims to combat settler tactics of elimination through assimilation and dispossession. In so doing, Maya migrants are forging a new vision of Indigenous urbanism that moves beyond a colonial politics of recognition.