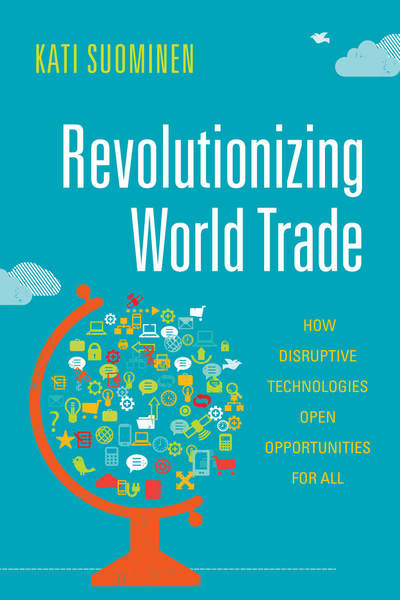 Consider two very different worlds only a few miles from each other. One world is that of Jennifer Shanklin-Hawkins and Nicole Hargrove, featured in November 2016 in The New York Times, who have worked all their lives at the Carrier air conditioner factory in Indianapolis and eagerly expected President-elect Trump to impose tariffs on air conditioners to prevent their factory from moving to Mexico.1 The other world is that of Travis Baird, who lives 150 miles away in Elkhart, Indiana. In 2004, Travis started his motorbike gear business with $3,500, and today, selling on eBay, sells gear to 131 countries and derives 41 percent of his revenue from exports riding on free trade and prosperity in other countries.2

Which is the world you want to live in? One in which low-skilled, disillusioned factory workers call for protectionist barriers against international trade? Or one in which entrepreneurs—using their ingenuity, state-of-the-art technology, and the open market access that American trade negotiators have secured over the past eight decades—sell their products and services to customers across the planet, grow their businesses, hire new people, and realize their potential? If you choose the latter world, this book offers a roadmap. For it won’t come about on its own.

Globalization—growth of cross-border flows of products, services, data, capital, and people—has unfolded majestically around the planet over the past 150 years, sweeping over just about every country, city, and household. Ravaged by wars, recessions, and protectionist pressures, globalization has gone undefeated, time and again rebounding with new vigor and reach. In the past three decades, a period of the greatest wave of globalization yet, globalization has been driven by multinational corporations and their global supply chains. In this model, companies sourced parts, components, and raw materials from suppliers around the world for assembly into final products in low-cost manufacturing hubs in Mexico and China and Poland, and exported the final products to shoppers touring Walmarts in St. Louis and Apple stores in San Francisco. Describing the globalization of production, the World Trade Organization declared products were no longer made in China or made in the United States—they were now “Made in the World.”

As global production disintegrated, national economies integrated. In the United States, trade soared to 24 percent of GDP, up from 2 percent in 1980; in Korea, to 87 percent of GDP, in Germany, to 75 percent, in Mexico, to 63 percent, in China, to 47 percent. Even economies that have long been closed to trade such as Cuba and Myanmar have embraced foreign trade and investment. Trade grew almost twice as fast as the world economy in 1980–2015, from 35 percent to nearly 60 percent of world GDP, and foreign direct investment stocks soared from 5 to some 35 percent of world GDP.3

Attesting to the rising relevance of trade in national economies, global companies and import-competing lobbies clashed in fierce battles over the direction of trade policy. Threatened by low-cost labor in emerging markets, American unions fought each new trade deal; dependent on their subsidies, farmers from France to Korea mounted violent street protests. Rock-throwing protesters hounded WTO’s biennial ministerial meetings, claiming corporations were exploiting workers in developing nations. At the same time, gains from trade quietly expanded around the world. Every American household is found in several studies to be roughly $15,000 richer each year because of the cost-savings created by the fact that America is open to imports.4 Opening to foreign investment and trade, backward-developing countries got on a growth escalator, transforming into booming emerging markets. From the 1990s onward, countries around the world have negotiated dozens of free trade agreements (FTAs) with each other; every WTO member belongs to at least one FTA. Most recently, African nations have come together to negotiate a historic continental trade deal. The recent U.S.-China trade warring aside, the free trade coalition has held: there have been no major reversals in trade liberalization since the Great Depression.

Yet there are few reasons to sit still.

Second, one key driver of productivity growth, world trade, is only cautiously rebounding since plunging and then flatlining after the 2008–2009 global financial crisis. In the post–Great Recession years, globalization has lost some of its vigor. Shackled by economic cooling and slowdown in liberalization, trade has grown more slowly after 2008 than at any time since the recession of the early 1980s. Still upbeat about its prospects in 2015, by 2016 the global shipping giant Maersk had declared that the shipping industry faced conditions—such as the crude oil price crisis and sluggish demand in Brazil, Russia, and Europe—that were much worse than those that preceded the 2008–2009 crisis. It is no coincidence that productivity growth around the world has sagged as trade growth has slowed. Growth of world trade improved in 2017 to 4.6 percent but fell in 2018 to 3 percent, still too low to drive economic growth.6

Third, all the talk about globalization notwithstanding, the world economy is still far from globalized. Trade economists have long known about “missing trade”—the fact that there is far more trade within than between countries, than would be expected on the basis of economic fundamentals. Almost one half of all pairs of countries in the world, some fifteen thousand pairs, are tradeless couples. Much of world trade is carried out among countries that share a border: for Latin American countries, trade with land neighbors is 20 percent of total trade, for European and North American economies, it is up to 35 percent. And what economists call “home bias” persists. For example, only 5 percent of U.S. companies, 6 percent of Mexican companies, and 20 percent of Swedish companies export. Empirically, most of world trade is still generated by “export superstars,” the top 1 percent largest exporters, such as GE, Boeing, and Walmart in the United States. Most of their trade is intra-firm, among their own subsidiaries. The world is not yet as flat as we might believe.

Fourth, free trade has become a curse word, and trade politics have soured. At the time of writing, Washington and Beijing are raising tariffs on each other’s exports, engaged in a futile, counterproductive trade war that neither can win. For many Americans, the image of globalization is still one of American factories fleeing to Mexico or China in search of low-cost labor. While bilateral trade agreements have flourished in the past several years, the multilateral Doha Round is dead, the United States has pulled out of the Trans-Pacific Partnership, and Brexit has been evoking fears about a balkanized world trading system. Except for a flagship agreement on trade facilitation reached in 2013, the WTO membership has failed to make any significant progress since the institution was launched in 1995. The WTO will not rebound as a venue for multilateral trade deals inked by its 164 members. Trade deals will continue to be plurilateral and bilateral, negotiated among coalitions of the willing.

This book regards trade as a force of great good, one that improves lives around the world. It also sees trade as but a voluntary, mutually consenting exchange of goods and services between a buyer in one country and a seller in another country. No one forces an American business to import computers from China or French online shoppers to buy Argentine Malbec: they do so because they want to, enjoying their freedom to trade. However, I also recognize that trade has distributional impacts. If not coupled with efforts that ease the transition of uncompetitive businesses and workers to a world of freer trade, trade liberalization can hurt them, while making good companies even better and more productive, and decidedly benefiting consumers and businesses that import. I personally failed to understand how viscerally these distributional effects would be transposed into American politics and how they could brew to help bring about the election of President Trump. But I am an empiricist and espouse the view that most job churn, unemployment, and inequality are not driven by trade—or imports, more specifically. Empirically, these troubles have many drivers, from technological changes such as automation to gaps in skills development in the workforce.