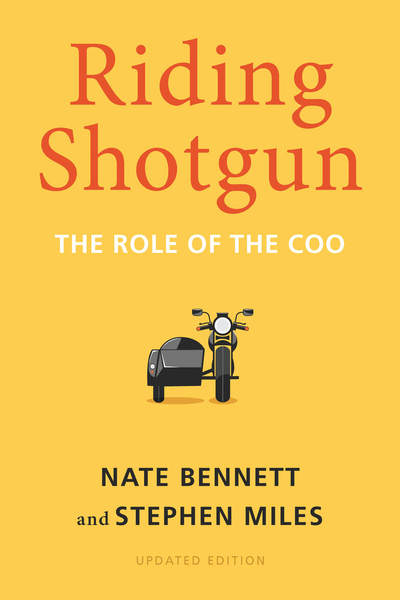 When Riding Shotgun was originally published in 2006, it represented the first effort to look deeply at a potentially critical and yet poorly understood role: the chief operating officer (COO). To describe the state of knowledge at the time, our keyword search for leadership on amazon.com yielded more than sixteen thousand titles. A keyword search on CEO at that same site turned up just shy of three thousand titles. When we then searched for COO, the results confirmed the need for the book. The returns of the search consisted of a digital download of an article by Stuart Crainer titled “Who Needs a COO?”; Okamoto condoms, in various packages; a VHS recording of a short film, Bill and Coo; an automotive crescent wrench; and a doll that “giggles and coos.” It was evident to us that the COO role had not received sufficient attention.

As the number two executive, the role is clearly important. In fact, some have argued that the number two position is “the toughest job in a company.”1 The COO is typically the key individual responsible for delivery of results day to day, quarter to quarter. The COO plays a critical leadership role in executing the strategies developed by the top management team. In many cases, COOs are groomed to be—or are actually being tested as—the organization’s CEO-elect. Even if the effort has not been made to groom the successor, it may have been assumed. As Jay Conger and David Nadler note,

When a CEO fails to prepare a potential successor and is suddenly pressured to step down, unexpectedly falls ill or passes away, it is not uncommon for the board to select the company’s number-two executive by default. The appeal of the choice is quite simple: The second in command has likely played an instrumental role in the CEO’s success and is well versed in the company’s challenges.2

Further, many very visible CEO appointments, most recently Tim Cook at Apple Computers, have been promotions of the COO. It appears to be an excellent place for the development of the CEO’s successor. The fact that the role is central, highly complex, and not well understood was troubling to us.

So ten years ago, we set out to report on our effort to better understand the COO role and what was necessary for the role to be a valuable one. Through a series of conversations with executives, we were able to offer a better understanding of the role, when it makes sense for a company to create such a role, what to look for when evaluating candidates, and how an incumbent might be advised to enact the position.

Through our research, we found a number of benefits that organizations experienced when a COO was in place. At the same time, there were many examples of companies where performance did not appear to suffer in the absence of a COO. Our conclusion was not that the COO position was simply an elective one; we found the role created value when implemented at the right time and staffed and supported in the right way. There had to be enough work to keep a second set of hands at the top busy, the trust between the CEO and COO had to be unflinching, and the handoffs between the two flawless. We also confirmed our suspicion that the COO role displayed a tremendous amount of variation in just how it was designed and executed. Whereas other c-suite positions are largely similar from company to company, we found that the COO role could be any one or a combination of seven different jobs. COOs could be best thought of as (1) the heir apparent, (2) a true co-leader, (3) a mentor, (4) a change agent, (5) a trusted partner, (6) an executor, and/or (7) an MVP the company promoted to retain. For the role to create value, the COO incumbent had to be able to fit the appropriate COO archetype to a T.

As the COO position has received increased attention, these characteristics of the COO role have been repeatedly confirmed—the position remains a highly idiosyncratic one that adds tremendous value to company leadership when executed for the right reason, in the right way, by the right person. It has been encouraging to us, in the years since the book first appeared, to hear from executives just how useful the book has been. Since the book was released, each of us has had a number of opportunities to engage more deeply with the COOs. For example, the first author spent a number of years serving as the academic advisor to the Accenture COO Circle, an affinity group for over a hundred COOs from the world’s largest companies and not-for-profits. The second author has established his own firm working closely with boards on executive assessment and succession planning, a practice that places him in the room with COOs on a near-daily basis. We both remain fascinated by the role and how it can be leveraged to create strong and effective leadership in a company.

Through our ongoing interactions with COOs, it became apparent that during the last ten years an interesting variety of factors were directly and significantly impacting the nature of the COO’s work. The most dramatic change since 2006 is the need for the COO to balance a concern for the future with operational success today. Years ago, leadership teams could more cleanly separate the CEO’s worry about tomorrow from the COO’s worry about today. No longer can a COO be satisfied that a heads-down approach focused on meeting today’s challenges is sufficient; COOs have had to adapt to become heads-up leaders, thinking about and immersed in the external world. And the skill set necessary has expanded accordingly, especially in the areas of finance and technology.

These new demands on the COO are driven by a number of forces. The recession put even tighter clamps on operations—it wasn’t too long into the recession before reports of “the fat has been cut” began to resonate. However, in spite of any protestations, COOs were called upon to continue to seek greater cost reductions. To this end, companies in pursuit of cost savings took advantage of the ability to take operations anywhere in the world. Some companies began building manufacturing facilities “in country” to get relief from currency fluctuations and to increase their speed and responsiveness to specific markets. For example, for the first time in company history Adidas has announced plans to bring manufacturing onshore in the United States in a format that will allow a more customer-focused and agile operation. More broadly, leaders are making investments in wide-ranging geographies in order to be much closer to suppliers. A new operational model is being explored—the creation of joint development centers to facilitate the ability to use the insights of two or more companies to streamline costs and produce more impactful innovations.

For companies moving around the globe to seek a cost advantage, the inevitable result has been the creation of ever-longer supply chains that are as a result fragile. Over the past decade, a number of dramatic natural disasters have raised questions about whether or not supply chains are too stretched, too vulnerable, and too inflexible. For an example of the latter, flooding in Thailand upended the global disk drive industry. Some 40 percent of the world’s disk drives are manufactured in Thailand; Seagate’s facility happened to be on higher ground than that of rival Western Digital. The damage to Western Digital’s operations was significant enough to allow Seagate to surpass them and become the market leader.

Another external element forcing COOs to become more “heads up” is the risk of terrorism—through either a physical attack or a data breach. These are each largely new challenges with which COOs are left to wrestle. In some companies, leadership teams have explored different ways to assign responsibility for what are essentially all sources of risk through the creation of a number of new c-suite positions: chief risk officers, data officers, innovation officers, and technology officers, for example, are now found at the table, in addition to or instead of the COO. Each new c-suite partner creates a new interdependency for the COO to manage.

As we have watched companies find ways to address these risks, we realized that we should revisit our 2006 work to identify the new lessons that COOs needed to learn. Toward that end, we have undertaken this effort to refresh our investigation of the COO role. This edition of Riding Shotgun explores these themes through new conversations with COOs who thrived during the decade: Jim Firestone (Xerox), Randy Pond (Cisco Systems), Rudy Lobo (Regus), and Gil West (Delta Air Lines). Our goal in doing so is to make certain that this book continues to be an accurate source of useful insight for individuals who are interested in understanding how to create the largest return on investment from a COO position. A new generation of COOs is going to be required to provide leadership, to achieve strategic objectives, and more broadly to help organizations succeed. It is our hope that the insights presented herein form a basis for creating a deeper understanding of the role and will contribute to executives’ efforts to appropriately create, structure, and deploy the position.

1. Robert Lear, quoted in Ettore, B. (1993, February). Who is this person: Focus on the number two. Management Review.