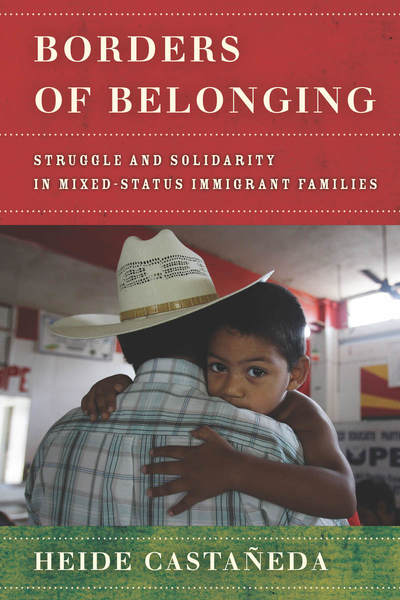 ILLEGALITY AND THE IMMIGRANT FAMILY

AFTER MICHELLE MARTINEZ gave birth to a baby girl in a South Texas hospital, she went to the county clerk’s office to pick up the birth certificate, the same way as she had with her first child. But officials told Michelle, an undocumented Mexican immigrant, that the rules had changed. Without specific documents, she would not be able to get the vital record showing that her daughter was a natural-born citizen. When I met Michelle, her daughter was three years old and still had no birth certificate. She said,

I need to get it before they take everything away from her. I don’t have a Social Security number, and I can’t get an ID from here. I have the matrícula consular [identification card issued by the Mexican consulate], but they don’t want to take it like before. With everything that’s going on right now, they can take Mexican parents away, deport them. I’m scared. They want a specific ID I can’t get here. You actually need to go over to Mexico for that. But if I do, I can’t come back.

Like many other mothers, Michelle was asked to present a Mexican driver’s license or national identity card. Since she came to the United States when she was four years old, she had neither. Because she is now undocumented, she can’t travel to Mexico and return; if she did, she would be stopped at the border and refused entry since she no longer has a valid visa. And at the time, consulates in the United States only issued the matrícula consular, which numerous states, municipalities, and businesses across the country accept as an official identification card. The federal government allows it to be used to obtain an Individual Taxpayer Identification Number (ITIN) in order to pay income taxes, many states consider it valid proof of identity for obtaining a driver’s license, and financial institutions accept it for critical activities such as banking. It is a lifeline for the more than 5.6 million undocumented Mexican nationals in the United States. For undocumented parents like Michelle, the matrícula consular is often the only form of identification they can obtain.

Michelle continued, “So I asked them, ‘Is there any other way?’ But they didn’t want to help me. I’m like, what do I do? Next year she starts school. She was supposed to start Head Start this year, but she couldn’t because I don’t have the birth certificate.”1 The baby’s father, a U.S. citizen, was not listed on the birth certificate even though he was present at the birth. The hospital staff wouldn’t let him sign the paperwork, since he did not have an ID with him at the time. “So, his mom went home and got the ID,” Michelle told me. “And then he signed everything. He went into the office of the lady that did the paperwork. Gave her the ID and everything. We thought that was done.” However, when they tried obtaining the birth certificate, they were told he had still not been listed as the father. She said, “It looked like someone had whited out his name. We were shocked!” To correct the clerical mistake, the county then asked Michelle to complete an application for child support. She was incredulous: “Why am I going to file for child support? We live together. Just because they didn’t list him on the birth certificate? So now we had to go get all these papers signed and notarized again, and wait while they send it up to Houston. Then we have to pay again.”

To speed up the process, the clerk suggested that Michelle drive to Houston and visit the main office of the Texas Department of State Health Services in person, where she could obtain the birth certificate the same day. However, to get there, Michelle would have to pass through one of the U.S. Customs and Border Protection checkpoints set up between 25 and 100 miles from the international border along all major highways leading to the interior of the United States. Because of these checkpoints, since 2001, Michelle has been unable to leave the region where she resides. She is one of 1.7 million undocumented immigrants living in Texas, many of whom are concentrated within a 100-mile-wide buffer strip along the border that forms a secondary boundary to the interior of the United States.2 These checkpoints affect not just recent border crossers but also those who have lived here for decades. Michelle was trapped between two boundaries: she could not return to Mexico to obtain another form of identification for herself, nor could she drive to Houston to expedite the process for her daughter.

In 2015, two dozen parents sued the State of Texas, saying they could not obtain the documents that officials were demanding.3 The lawsuit argued that the state had violated the Fourteenth Amendment of the Constitution, impacting U.S.-citizen children’s rights by ordering county registrars to no longer recognize as proof of identification their parents’ matrícula consular or foreign passport without a valid visa. The State of Texas, on the other hand, argued that the issuing party (the Mexican consulate) did not routinely verify the documents used to obtain the matrícula. But as the lawsuit stated, “By denying the Plaintiff children their birth certificates, Defendants have created a category of second-class citizens, disadvantaged from childhood on with respect to, inter alia, health and educational opportunities.” It cited opaque and irregular processes at vital statistics offices—particularly inconsistent in the Rio Grande Valley of South Texas—that prevented undocumented parents from being able to present adequate proof of their own identities in order to secure documents for their children.4

This example highlights what has been termed “bureaucratic disentitlement,” which targets marginalized groups, such as the U.S.-born children of undocumented immigrants. Bureaucratic disentitlement is “the insidious process by which administrative agencies deprive individuals of their statutory entitlements and infringe on their constitutional rights.”5 In everyday practice, it takes the form of withholding information, providing misinformation, isolating applicants, and requiring extraordinary amounts of documentation for simple administrative procedures. In doing so, it inhibits the transformation of statutory rights into tangible benefits. This example goes one step further, hinting not only at disentitlement but also at the attempted bureaucratic erasure of an entire generation. These practices highlight the power of rhetoric around “anchor babies” in the United States today, which frames the U.S.-born children of immigrants as undeserving and suspect citizens, and underscore the ways in which the state can disregard their rights.6 Despite widespread misconceptions, U.S.-born children do not “anchor” families by providing automatic pathways to citizenship to their parents, nor do they provide protection from deportation; instead, mixed-status families remain entrapped in a “labyrinth of liminality” and precarity.7