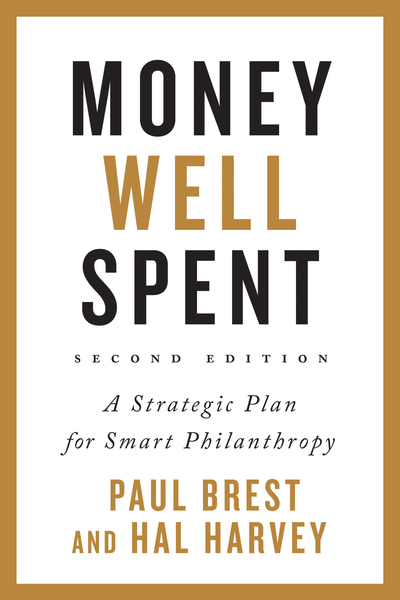 PREFACE TO THE SECOND EDITION

Even before Warren Buffett’s $31 billion gift to the Bill & Melinda Gates Foundation garnered huge media attention, the twenty-first century was on its way to being the century of philanthropy. In the decade since the first edition of this book, other huge philanthropies, some in the form of limited liability partnerships rather than tax-exempt foundations, have appeared on the scene—for example, the Emerson Collective, founded by Steve Jobs’s widow, Laurene Powell Jobs; the Chan-Zuckerberg Initiative, founded by Priscilla Chan and her husband, Mark Zuckerberg, a cofounder of Facebook; and Good Ventures, founded by Cari Tuna and her husband, Dustin Moskowitz, also a Facebook cofounder.

In 2010, Bill Gates and Warren Buffet began recruiting the wealthy people of the world to contribute a majority of their wealth to philanthropic causes during their lifetimes or in their wills. As of 2017, the pledge has 158 signers, either individuals or couples. Most of the signers of the pledge are billionaires, with their pledges totaling more than $365 billion.1

Today, there are almost ninety US foundations with assets over $1 billion; more than two hundred with assets over $500 million; and myriad foundations with assets over $1 million.2 Transfers of wealth by gifts and bequests are predicted to increase greatly in the coming decades, with significant portions of the monies going to philanthropy. The philanthropic sectors in China and India and some other countries are also growing. And there also is a growing global interest in novel finance mechanisms, including results-based financing and socially motivated investing—so-called impact investing.

The second edition of Money Well Spent reflects these developments and trends. More important, it reflects the field’s, and our own, growing understanding of how to do philanthropy effectively. We began the first edition when we were at the William and Flora Hewlett Foundation—Paul as president and Hal as director of its Environment Program. We’re proud of the foundation’s leadership in practicing what might be called strategic philanthropy. But at that time, the foundation was close to unique in this practice, and we were learning while doing.

Ten years later, strategic philanthropy is still not pervasive. But it has taken root not only among larger foundations but also in the practice of an increasing number of high-net-worth individual philanthropists. Concomitantly, the infrastructure of the field supporting their work has flourished.

At the same time, our own experience has broadened and our knowledge has deepened. Paul retired from the Hewlett Foundation to return to Stanford, where he joined the Stanford Center on Philanthropy and Civil Society and has been teaching about philanthropic strategy and impact investing at the Law School and Graduate School of Business. Hal moved from the Hewlett Foundation to become founder and CEO of the ClimateWorks Foundation and then to found Energy Innovation, which consults on clean energy for a broad range of philanthropists and organizations. All of these developments have given us new perspectives on the principles and practices of strategic philanthropy.

As in the first edition, a somewhat disproportionate number of our examples are drawn from the William and Flora Hewlett Foundation—not (merely) because it is an exemplary grantmaker but because we worked there and continue to keep up with its activities through friends and colleagues, including Paul’s successor as president, Larry Kramer.