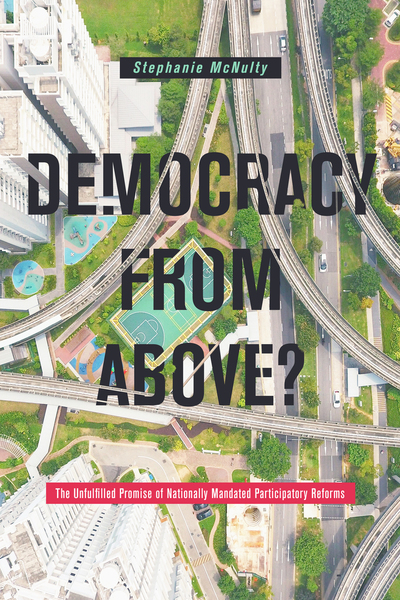 Citizens in almost every country on the globe are dissatisfied with their parliaments and political parties, and people feel disconnected from political life. This democratic deficit has delegitimized many governments around the world. To attack this deficit, some national elected officials mandate participatory institutions in subnational governments through constitutional reforms and legislative packages. In countries as diverse as India, Chile, Uganda, the Philippines, and Venezuela, national elected officials designed institutions to bring together citizens to make decisions regarding local budgets and governmental services and to oversee their elected officials. This chapter serves to introduce and frame the book's comprehensive analysis of these reforms. The chapter reviews the existing literature about participatory governance and presents a theoretical framework for the analysis of the origin and effects of nationally mandated participatory reforms.

This chapter reviews the methodological choices and tools employed throughout the book. It defines and clarifies the exact nature of nationally mandated participatory reforms as well as the specific outcomes that we expect to emerge. In other words, the discussion explicates the independent and dependent variables of this analysis in much more depth, noting the indicators and data sources employed throughout the book. The chapter also describes the case selection criteria. The chapter presents seventeen cases of nationally mandated reforms passed and implemented between 1985 and 2015: Bolivia, Brazil, Chile, Colombia, the Dominican Republic, Ecuador, Guatemala, Honduras, India, Mozambique, Nicaragua, Peru, the Philippines, Rwanda, South Africa, Uganda, and Venezuela.

3 The Promise Heard around the World
chapter abstract

This chapter explores the nature and effects of the reform efforts in developing countries at the macro (global) level. This analysis explores three questions, using evidence from the seventeen cases of nationally mandated participatory reforms that emerged between 1985 and 2015: (1) When have elected officials passed nationally mandated participatory reforms? (2) Where have the reforms emerged? (3) What are the most typical design features? Latin America emerges as the epicenter of the reform efforts, with the highest number of cases. The third wave of democracy and neoliberal reforms that stressed smaller and more efficient states and citizen input created a conduit for this kind of reform effort. In Latin America, the "pink tide" leaders deepened reform efforts post-democratization. Thus, in most of the cases, some sort of domestic critical juncture provided the context for these reforms. The macro analysis also demonstrates the variety of institutional designs adopted by reformers.

This chapter explores the Urban and Rural Development Council System in Guatemala. It reviews the country's modern political context, then it moves on to describe the nationally mandated participatory reform. The chapter explores why reformers designed this particular council system in the way that they did, then documents the emergent results. The analysis demonstrates that although the reform has increased civil society's voice in some ways, it has mostly failed to achieve its promise to include historically marginalized actors in decision making and to improve governance over time. Several factors have prevented the system from achieving its goals, including the legacies of military rule, i.e., the critical juncture from which the system emerged; a confusing design; elite capture, clientelism, and pork-barrel politics, which are exacerbated by extremely weak political parties; the lack of high-level political support; and a weak civil society sector.

This chapter explores how and why Bolivia's Law of Popular Participation changed aspects of democracy and governance, emphasizing the period from 1994 to 2009. Bolivia has experienced some interesting results related to this law. The process has led to increased citizen participation in development planning and some concrete changes in municipal effectiveness. It also helped unleash social forces that have since gained national power and have a much stronger voice in the political arena. While the law is not perfect, scholars have been able to demonstrate positive and far-reaching effects in the area of social services through public works. At the same time, the reform has not made the public sphere in Bolivia more inclusive. Improved government effectiveness has not translated to strategic and coordinated poverty alleviation. This failure may be due to the fact that the LPP, part of a neoliberal project, privileges infrastructure projects, and not deep social changes.

This chapter provides a theoretical framework for understanding the origin and effects of nationally mandated participatory reforms. After briefly reviewing the geographical location, timing, and designs of the seventeen cases, the chapter explains why reformers adopt these reforms in developing countries. Three interdependent and interactive factors lead many national leaders to promote these reforms: a critical juncture combined with reform agents' ideological and strategic motivations. Next the chapter theorizes the effects of these reforms to explore the variation in outcomes demonstrated by the three in-depth case studies. Several factors condition the results, including the critical juncture from which the design emerges; high-level political support; the political party system; and an organized and empowered civil society sector. The chapter concludes with a brief discussion of recommendations for improving future efforts to engage citizens through these kinds of reform efforts.