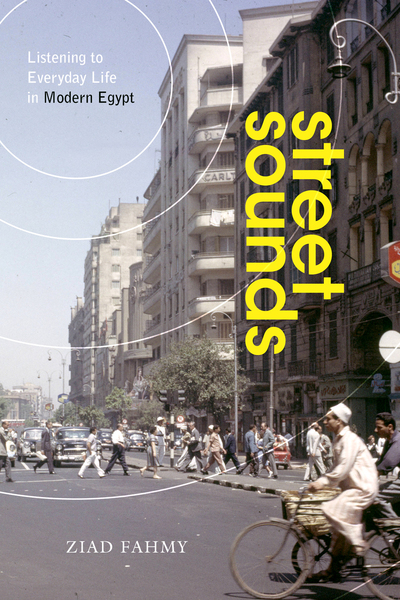 In the Introduction I briefly examine the importance of the field of sound studies and the need for historians of the Middle East to engage with the sounds of the past. I discuss the importance of "listening" to the sources, in order to mine the archives for sonic events. Finally, Street Sounds proposes that by taking into account the changing sounds of the past, and by examining how people dealt with their daily sounded environment, we can be brought closer to a more embodied microlevel analysis of mundane street life. This is especially true in a period of rapid sonic transition, which exemplified the infrastructural and technological transformations during the first half of the twentieth century.

Inspired in part by Michel de Certeau's The Practice of Everyday Life, in Chapter 1, I describe life in early- to mid-twentieth-century Cairo from a pedestrian's perspective. "Walking the City: Street Voices, Traffic, and the Mundane Sounds of Everyday Life" is devoted to the sounds of pedestrians and commuters as I analyze the ways that they used, occupied, and walked through those public spaces to commute, work, sell, and shop, and to entertain and be entertained. The first part of the chapter examines some of the social implications of embodied noises, from jingling anklets and bracelets to footsteps, as ordinary Cairenes were negotiating their way through a rapidly changing city. The second half of the chapter focuses on the calls of street hawkers, entertainers, and merchants who relied on their voices to advertise their goods and services.

2 Silencing the Streets: Classism, Fear of the Crowd, and Regulating Sounds and Bodies
chapter abstract

Chapter 2, "Silencing the Streets: Classism, Fear of the Crowd, and Regulating Sounds and Bodies," examines both the Egyptian government's attempts at regulating and silencing public spaces and the class implications of these policies. New anti-begging and anti-homelessness discourses invoked fears of an imminent breakdown of public order and even public health. In this chapter, I also document the interrelated and ever-present class bias in the Egyptian press, especially with regard to its coverage of the urban streets, street hawkers, and the itinerant poor.

3 Roads and Tracks: Modern Traffic and the Sensory and Social Impact of Trams and Automobiles
chapter abstract

Chapter 3, "Roads and Tracks: Modern Traffic and the Sensory and Social Impact of Trams and Automobiles," examines the modernization of Egypt's urban infrastructure, especially roads and tramways. The changing sounds and the social impact of growing urban traffic is carefully examined, with an emphasis on the introduction of tramways and motor vehicles. The chapter also documents and elaborates on the sonic impact of new urban spaces from large city squares to bustling transportation hubs. The problems of dramatically increased motor traffic and early attempts at regulating car horn noise are especially investigated.

4 The Soundscapes of Modernity: Electricity, Lights and the Sounds of Nightlife
chapter abstract

Chapter 4, "The Soundscapes of Modernity: Electricity, Lights and the Sounds of Nightlife," begins by examining the professional lighting of Egyptian cities by private gas utilities and the introduction of electricity and electric lighting. The sonic implication of electricity was of course enormous as it not only allowed the eventual proliferation of radios, loudspeakers, and tramways, but just as importantly brought the electric lights that forever changed the sounds of the Egyptian night. The growth of a regularly boisterous nightlife and the establishment of newer places of public leisure, from amusement parks to cabarets and movie theaters catering to diverse audiences, are closely examined.

5 The Sounds of Weddings and Funerals: From Brass Bands to Wails and Ululations
chapter abstract

Chapter 5 examines the evolving street sounds of traditional Egyptian weddings and funerals, which involved elaborate street processions and a variety of auditory and visual displays. It examines the changing roles of street music, singing, loud funerary grieving, and other important verbal and nonverbal vocalizations. The chapter concludes by examining some of the attacks directed against many of the embodied and auditory aspects of these traditional ceremonies by the government and by both secular and Islamic modernists. The one point all the "modernizing" camps agreed on was their belief in the general ignorance of the vast majority of the population and the urgent need for education, reform, and uplift. The chapter also addresses how many of these vulgarizing discourses played a role in the class distinction of Egypt's growing middle classes as they self-consciously attempted to define and separate themselves from the masses through sensory differentiation.

In Chapter 6, "Sounding Out State Power: Cannons, Music and Loudspeakers," I examine the Egyptian state's appropriation of large religious and secular celebrations and festivals. The chapter centers exclusively on the official sounds and spectacles performed and sponsored by the Egyptian state in an ongoing effort to legitimize its secular and religious authority in the eyes and ears of the masses. As I demonstrate in this chapter, drums, cannons, and twenty-one gun salutes are as important as uniforms, flags, and propaganda posters. I will particularly focus on the state's use of music, microphones, and radio speeches broadcast over loudspeakers during parades, festivals, and other large public gatherings.

The Conclusion briefly summaries some of the key arguments of the book and delves into the interrelationship between memory, class, nationalism, and the senses. It discusses the contradiction between an apparent nostalgia for street sounds of the past and a simultaneous vulgarization of contemporary street sounds.