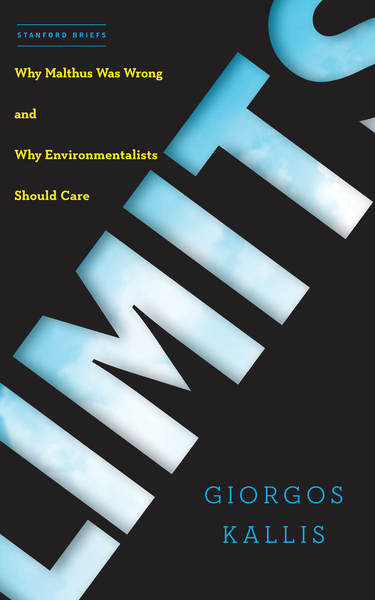 “Know no limits.” “All limits are self-imposed.” “You are your only limit.” “With hard work there are no limits.” “The only limits that exist are the ones in your own mind.” “Don’t tell me the sky is the limit when there are footprints on the moon.”

These are a few of the maxims one finds in an internet search on the word “limits.” Western culture is infatuated with the dream of overcoming limits. At the same time, we are overwhelmed by the ultimate limit, that of our own death, writ large as the death of Western civilization. California’s “punishing drought,” the New York Times tells us, has forced the state to reconsider whether its engine of growth “has run against the limits of nature.”1 “Civilization is at stake if we don’t act now” and limit global warming to 1.5 degrees Celsius, warns the United Nations.2

How and why have we come to think about limits the way we do? What role has the idea of limits played in the development of modern thought, from economics to environmentalism? Do societies need limits? And if they do, what kinds of limits? These are some of the questions entertained in this book.

In the following pages, I aim to reclaim, refine, and defend the notion of limits. I want to dissociate limits from what in scholarly jargon we call Malthusianism—a set of ideas dating back to 1798 and an essay written by the cleric-turned-economist Thomas Robert Malthus that have come to shape the ways we think about limits. With this book, I hope to make those who invoke limits consider how best to do so; I also hope to make the critics of limits think twice before branding those of us who call for limits as Malthusians.

I would like to begin with an image from the movie The Legend of 1900 by Giuseppe Tornatore.3 The movie’s protagonist, 1900, was named for the year he was born; the newborn baby had been found on New Year’s Day in a box by an engine room mechanic on an ocean liner. Played by Tim Roth, 1900 never leaves the boat, where he develops a gift for piano playing. Famous jazz pianists come to the ship to duel, and he beats them all. When a music producer asks him to record an album, 1900, who has fallen in love with a passenger, decides to leave the ship. In a memorable scene, he is halfway down the ladder and the crew is out saluting goodbye. He stares at the city in front of him and balks. Turning around, he looks back to the top of the ladder and decides to remain forever aboard.

Times are hard for those who want to live within limits. Airplanes have replaced ocean liners, and 1900 sinks together with the boat. The limit of death is the stuff of Greek tragedy, not Hollywood blockbusters—1900 sank in the box office as well. But to face global warming, we desperately need a culture of limits.4 This book is an effort to go in such a direction.

I am an environmentalist and limits are the central idea of environmentalism. “Limits are back”:5 planetary boundaries, secular stagnation, postgrowth, degrowth.6 For one historian of the green movement, Andrew Dobson, “it seems like Groundhog day.”7 As in the 1970s, he claims, Malthusian environmentalists prophesy that we are doomed; and eternal optimists, like Ronald Reagan, back in the day, respond that “there are no limits to growth because there are no limits of human intelligence, imagination, and wonder.”8

Born in 1972, the same year that the Limits to Growth report was published, I find that the debate between supposed optimists and pessimists has been exhausted. These opposing views are but two sides of the same coin. Without limits, capitalism’s quest for endless growth does not make sense. Malthus and other early priests of capitalism constructed a picture whereby unlimited human wants clash with a limited world. Scarcity and growth became an inseparable pair, with limits spurring efforts for growth. My thesis is that it is only when we begin to accept the world as abundant that we can contemplate limiting our wants and delimiting a safe space for our freedom. This notion may appear counterintuitive, but that’s because we tend to think of limits in the Malthusian terms of scarcity. This book develops a different view of limits, one of limits as self-limitation, a view that I will trace from radical Greens back to the Romantics and even further back to the ancients.

Beginning with a rereading of Malthus’s 1798 Essay on the Principle of Population, I argue that Malthus discovered not natural limits but unlimited wants. Far from a prophet of doom, Malthus invoked doom so as to galvanize the pursuit of growth. We will see how Malthus is still with us thanks to modern economics, which was founded on this myth of eternal scarcity and a call for perpetual growth. I will explain how some environmentalists got trapped in this Malthusian vision of a limited and scarce world and why this is problematic. And I will make a case for self-limitation—the establishment of self-imposed and deliberately chosen limits—as distinct from the Malthusian limits we attribute to our internal or external world, which we must either overcome or succumb to. I will then turn to classical Greece as a civilization with a culture of self-limitation. There, and in the next chapter, where I deal with the limits of my own defense of limits, I will follow the novelist’s advice to write less about what I know and more about what interests me and what I want to know more about.9 I will close the book, though, more assertively, unapologetically defending the desire for limits.

In my first job, at the European Parliament, I worked on the revision of the EU laws that placed limits on water pollution. I witnessed firsthand the chemical lobby’s assault on environmental regulation fueled by an economic discourse that denied the need for limits. Returning to graduate school, I studied ecological economics and learned about limits to growth.10 Working at the University of California, Berkeley, with economist Dick Norgaard, I came to appreciate how difficult it is to define ecological limits, as limits are always a function of our intentions. As Dick wrote, limits are not about something out there but about limiting our negative impacts on each other and the environments with which we interact.11 This insight I develop here. From Berkeley’s geographers and political ecologists, too, I learned about the violence perpetuated in the name of limits and the power relations hidden behind seemingly innocent claims about nature and its limits.12

In hindsight, ever since then my work has been an effort to synthesize ecological economics and political ecology to develop a more nuanced approach to limits. I found what I was looking for in the work of a fellow Greek, Cornelius Castoriadis—bedside reading of my mother’s that I rediscovered as an adult. Castoriadis distinguishes between heteronomy—limits that we attribute to God or nature and that restrict our freedom—and autonomy, limits that we consciously set for ourselves. That distinction is the kernel of this book.

The debate about limits has political implications. The green idea that there should be limits to growth seems to choke on the progressive ideal of universal betterment. While many lean toward denial of or indifference to global warming, others place their bets on limitless technology and growth, the forces that have brought us where we are today. In a culture intolerant of limits, limiting fossil fuels and the comforts they sustain seems impossible. My intention here is to open up an intellectual and political space for rethinking limits.

There is another, more personal element to my passion for the question of limits. I grew up in Athens after the fall of a dictatorship and the collapse of harsh prohibitions. My parents made a point of not imposing strict rules at home. My first experience of school was an antiauthoritarian kindergarten self-organized by mothers and fathers. Growing up, I was never told what time to come home, but I did come back in time. I wasn’t told not to drink, and I drank, but rarely too much. My moderation became a matter of family and personal pride. The reader might find me guilty here of the intellectual’s inclination to universalize a personal truth and turn it into a social principle. But things are not so simple. My moderation, like 1900’s ship, is my home and my prison. There are social limits I have bowed to unaware, and limits I have unwillingly put upon my shoulders as I internalized the expectations of my parents and my own idea of who I was supposed to be. As a responsible man in the middle of my life, I find some of my self-limitations stifling. I want to consciously choose which limits to keep because they liberate me, decide which limits are part of our life in common and that I must accept, and determine which limits I or others have imposed on myself unjustly and from which I want to be free. My exploration of the notion of limits is part and parcel of my quest to understand my own limits.

I dedicate this book to my father for teaching me, discreetly, how to enjoy life with and without limits. To the memory of my mother, Maria: her sudden death drove home the pain of the ultimate limit. To my wife, Amalia, and my sister, Iris, for their love without limits. And as my references to limits reach their natural limit, to my mentors, friends, and colleagues: without them I would never have come up with the thoughts shared in this book.

3. The film is inspired by “Novecento,” a monologue by Alessandro Baricco. Giacomo D’Alisa pointed out to me the relevance of the movie for thinking about limits.

12. I studied political ecology at Berkeley in classes with Nancy Peluso and Michael Watts and by attending the colloquia of their Luce project on green governance. For the uninitiated, the best introduction to political ecology is Paul Robbins, Political ecology: A critical introduction (Hoboken: Wiley, 2011). I came across political ecology in the late 1990s through the work of Erik Swyngedouw, Maria Kaika, and Karen Bakker at Oxford, with whom I collaborated for research on water; see Nick Heynen, Maria Kaika, and Erik Swyngedouw, In the nature of cities: Urban political ecology and the politics of urban metabolism (London: Routledge, 2006); Karen Bakker, “Privatizing water, producing scarcity: The Yorkshire drought of 1995,” Economic Geography 76 (2000): 4–27. On the question of limits and scarcity, I have learned a lot from Lyla Mehta; see The limits to scarcity: Contesting the politics of allocation (Abingdon, UK: Routledge, 2013).