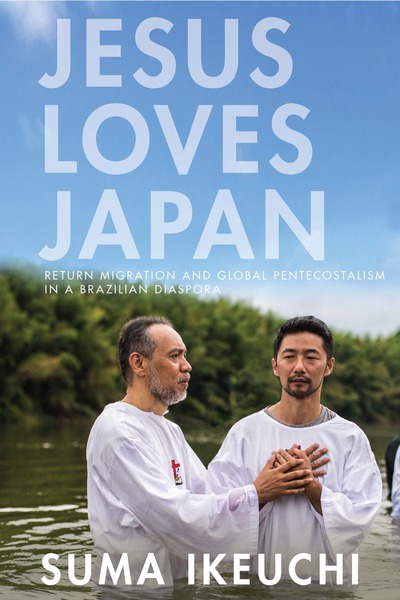 This introductory chapter outlines the main questions of the book. How do Nikkei migrant converts negotiate between their national citizenship, ethnic identity, and religious subjectivity? What happens when the right to mobility rests on the ability to embody state-sanctioned origin? How do their projects of return affect the moral contours of citizenship, belonging, and diaspora? It also clarifies the social significance of the book's subject by describing the two growing trends in contemporary globalization: the return migration in East Asia and the growth of Pentecostalism in Latin America. The phenomenon of Pentecostal conversion among Nikkei Brazilian migrants in Japan can thus provide an illuminating lens to study the dynamic intersection of these two migratory and religious movements.

This chapter offers a historical overview of Japanese-Brazilian migrant communities and their Pentecostal churches in Japan. Why are there Brazilians of Japanese descent living in Japan today and why do many of them convert to Latin American Pentecostalism in their supposed ancestral homeland? The chapter traces their migratory and religious history starting in 1908, when the first Japanese immigrants arrived in Brazil. It then covers the key historical events throughout the 20th and the early 21st century, such as Japan's defeat in the WWII, Nikkeis' ascent to the middle- and upper-class in Brazil, introduction of the ancestry-based visa by Japan in 1990, and the flourishing of Pentecostalism among the Nikkei "return" migrants. The chapter then moves onto the explanation of the ethnographic context of the research conducted by the author between 2012 and 2014 and fieldwork methods tht she employed.

Most Nikkei Brazilians in Japan are at once labor migrants and "return" migrants, who dream of a better future while working in low-paying jobs on visas granted on the basis of their past ancestral ties to the nation. As such, they grapple with the images of time—the past, the present, and the future—in complex ways. This chapter delves into these temporal hopes and anxieties. Specifically, it focuses on a predominant concern regarding time among migrant converts, namely, "putting aside living (deixar de viver, in Portuguese)." As many learn to postpone comfort in the present to work long hours and to save money for the planned return to Brazil, the feeling of suspended life becomes very common: "I am sacrificing the present to live a better future one day." The chapter discusses the symptom of temporal suffocation as a lens to analyze the aspirational temporality of migration.

4 Neither Here nor There
chapter abstract

This chapter investigates why the rhetoric of "neither here nor there (nem lá nem cá)" is so common among Nikkei Brazilian migrants in Japan. First, it illuminates how Nikkeis have transformed from "Asian whites" with "culture of discipline" in Brazil to "delinquent Latinos" with "culture of disorder" in Japan. This loss of ethnic status exacerbates the feeling that they have lost clear identity. Second, the distance—both physical and emotional—caused by migratory movement and labor environment fuels the sense of crisis that their family ties and gender roles are becoming weak or confusing. Third, the shifting identities of the next generation born or raised in Japan make many older Brazilian migrants think that the youth—many of whom are mixed-raced—are becoming too Japanese, losing the proper Brazilian identity. The chapter elaborates on these three facets that characterize the predominant narrative of in-between identity among the migrants.

5 Back to the Present
chapter abstract

This chapter discusses the ways in which conversion addresses common concerns regarding time among Nikkei Brazilian migrants in Japan, including the symptom of "putting aside living" discussed in Chapter 3. While labor migration promotes aspirational temporality, the charismatic temporality of Pentecostal conversion encourages converts to focus on the renewal in the moment, or "right now, right here." Many converts therefore feel that Pentecostal practices can help them experience and live the present moment, which they have been sacrificing for years as labor migrants in pursuit of the better future. The chapter thus illuminates how the practices and sensibilities of Pentecostal Christianity responds to the temporal anxieties of transnational migration. Seen through the lens of time, migration and conversion become part of the same process of moral subject formation, thus forming a "temporal tandem."

6 The Culture of Love
chapter abstract

While most Nikkei converts claim that love is a timeless "Christian" emotion, the trope of love seems to carry multiple meanings within their century-old history of transpacific diaspora. This chapter delves into the historical registers of Christian love among Nikkei Brazilian migrants in Japan. Nikkei congregants often contrast Christian love (amor) with Japanese discipline (educação). Specifically, they suggest that love augments and overcomes rigid discipline because it is more sincere, spontaneous, and modern. The chapter situates the experience of Christian love within the transnational landscape of flexible racial identities, thereby historicizing affect. In particular, it analyzes various "family restoration" seminars that Pentecostal churches organize in Japan to combat the distancing effects of transnational migration—Married for Life, Worship for Women, and Ancient Paths, to name a few. Migrant converts often believe that the Christian conception of family and gender roles can heal the "wounds" of labor migration.

To many Nikkeis, their "Japanese blood" carries a contentious meaning as a marker of their marginal place in the national kinship of Japan. This is in stark contrast to the other kind of blood that migrant converts frequently spoke about: the blood of Jesus as the medium of Christian fellowship open for any "brothers and sisters in faith." This chapter takes the tension between the two bloods—the "Japanese blood" and the blood of Jesus—as the point of departure to probe how Nikkei converts are crafting a new sense of citizenship in their strange ancestral homeland. While the national kinship locates the source of migrants' moral entitlement in their Japanese ancestral past, the Pentecostal kinship emphasizes the importance of continuous conversion in the charismatic present. The chapter will delve into the ethical aspects of kin-making by investigating the two diverging logics of relatedness.

Protestant Christianity is often understood as a culture of sincere personal belief. This chapter challenges that popular conception by analyzing the ritual life at a Pentecostal migrant church. Specifically, it demonstrates that the purview of "faith (fé)" goes beyond the cognized acceptance of explicit doctrines by elaborating on how some migrants approach conversion as an act of commitment to social and familial relationships that they desire to foster. The chapter focuses on one Okinawan Japanese migrant called Leticia to drive these points home. She chose to participate in water baptism and convert to Pentecostalism to follow her already-converted adult sons and to maintain "the harmony in family." Migrants like Leticia show that the charismatic faith in this ethnographic context consists of multiple layers, personal as well relational. It is this multiplicity that makes it possible for migrants from diverse cultural backgrounds to envision and construct "one community in faith."

While the notion of the individual figures prominently in the debate about Christian personhood in anthropology, the concept of "relational selves" has shaped much of the existing literature on Japanese self. This chapter takes this seeming divergence between "individual Christian" and "interdependent Japanese" as the point of departure. It probes how Nikkei Brazilian converts narrate their subject positions vis-à-vis the Japanese majority by engaging multiple ideals of personhood. Interestingly, both migrant converts and their Japanese neighbors often articulated their understandings about authentic self by discussing the category of religion. The chapter therefore brings together religion, authenticity, and personhood to illuminate how the Brazilian and Japanese residents in Japan envision the ethics of the self. It concludes that Pentecostal Brazilian migrants uphold that the self should ideally be "accompanied" by the divine Other and discusses glossolalia as one common practice used to foster this vision of accompanied personhood.

This concluding chapter revisits and elaborates on the theme of moral mobility. As the ethnographic expositions in the preceding chapters have shown, mobility is at once spatial, temporal, affective, and ethical. The argument is that movement itself would be simply inconceivable without such moral registers. "Jesus ama o Japão (Jesus loves Japan)" is a phrase that Nikkei migrant converts use in a wide range of contexts. Some migrant converts exclaim the phrase in a triumphant tone while evangelizing Japanese passersby in public; others utter it more hesitantly while reminiscing about the sense of in-betweenness that had haunted them in Japan. In other words, migrant converts resort to the same phrase—"Jesus loves Japan"—to generatively articulate the ethical dimensions of their mobility. The concluding chapter explores how such experiences of moral mobility may be redrawing the boundaries of Nikkei diaspora in the present.