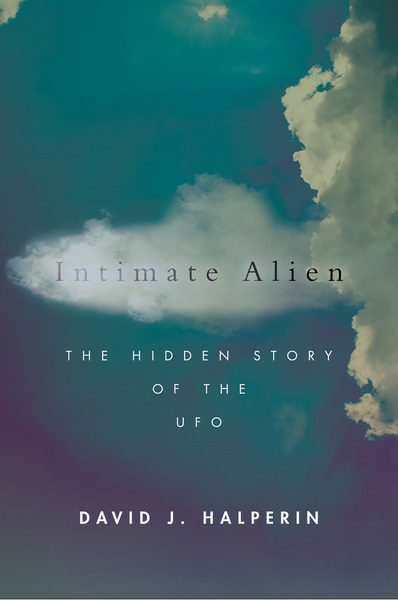 Some believe in UFOs; others debunk and even ridicule the whole idea. I neither believe nor debunk. I approach UFOs as a mythology, a collective dream of our culture or even our entire species, as rich and profound as the great mythologies of the ancient world. When the myth takes visible form, experienced as something unknown and alien, it's akin to what our ancestors would have called a "vision of God." It doesn't take place only, or even authentically, in the sky. It's a human phenomenon, encompassing those who experience it and those who mock it, believers and debunkers alike. The UFO is the mystery of them all, or more correctly the mystery of us.

The UFO story I know best is my own. I was not quite thirteen when I became persuaded, with the sudden force of a religious conversion, that UFOs are real and that it was my destined mission to solve their mystery. UFOs were a perfect mythic expression for the ultimate alien, namely my mother's approaching death, that had invaded my familiar skies. The suppression of the truth about UFOs by mysterious agencies, mirroring my family's refusal to speak of the disease draining my mother's life, seemed to me a self-evident fact. After she died, when I was sixteen, my conviction faded. But it left me with a keen sense of the power and fascination of the UFO myth in which I'd believed, and how it might help us come to terms with our finite lives.

Four case studies, taken from diverse locations and historical periods—Philadelphia in 1974, Belgium in 1989-1990, the Dardanelles in 1683, Papua New Guinea in 1959—illustrate a central premise: the UFO comes from within. In all four cases the UFOs are psychic entities taking on the illusion of physical reality, transforming some mundane stimulus into an extraordinary new creation. The transformation is not random or meaningless, but to be understood through the psyche of the observers. Its roots may plunge very deep, into layers of the psyche that transcend centuries and cultures. In each case, the question to be asked of the UFO is not what it is or how it flies, but: What does it mean?

The alien abduction myth of the late twentieth century had its beginning in 1964, when an interracial New Hampshire couple underwent hypnosis to help them cope with the physical and psychological consequences of what they remembered as a UFO encounter. The experience, eerie as it seemed, was triggered by nothing more unearthly than the light on a mountaintop observation tower. But the abject terror the memories evoked in African-American Barney Hill came from a far older collective memory, of abduction into the alien craft that was the European slave ship. In their "UFO abduction," Barney and his white wife Betty channeled his historic trauma and her historic crime. Unintentionally, they planted seeds in the culture which, years later, would burst into fantastic bloom.

4 The Lure of the Unremembered
chapter abstract

If 1964 marked the birth of the abduction myth, its watershed event came at the beginning of 1987, when Whitley Strieber's abduction memoir Communion leaped to the top of the best-seller charts. The haunting cover illustration gave us our iconic image of an alien face: light-bulb shape, huge slanted eyes of impenetrable black. The numbers of reported abductions multiplied into the thousands. Abduction memories, retrieved through hypnosis, shared cultural space with another kind of recovered memory, of childhood sexual abuse. When sexual-abuse memories fell into discredit, so did abductions. Yet a 6000-year-old mask from Kosovo in the Balkans, mirroring the face on the Communion cover, points to something underlying them that's archaic and universal, a prehistory that goes back far beyond their twentieth-century manifestations.

The UFO is a modern myth. It's also timeless, with a prehistory as well as a history; the interplay of the two aspects is necessary for understanding it. The prehistory of the abduction theme includes the ancient Jewish tradition of psychic journeys to the merkavah, the UFO-like "chariot" described in the first chapter of Ezekiel. Like many abductees, the "merkavah mystics" imagined themselves descending to a vehicle that ought to be in the skies. They shriveled in dread under the gaze of eyes like those on the cover of Strieber's Communion. The "descent," ancient and modern, is into the unconscious, to a realm where boundaries blur: between human and animal, human and alien, "I" and the ultimate "not-I"—death.

The "men in black" entered UFO mythology in 1953, when (according to report) they paid an unwelcome visit to a UFO researcher named Bender and terrorized him into silence. Like the abduction theme, the men-in-black tradition has a long prehistory. Its contemporary history begins with the mythologizing of the Bender incident by writer Gray Barker, who as a closeted gay man in 1950s West Virginia knew very well what it was to have a secret too terrible to be spoken. The myth, born of Barker's private trauma, spread. Others had run-ins with men in black; death symbolism became part of their image. In the wildly popular "Men In Black" movies at century's end, they turned into harsh protectors who "won't let you remember" what you've known to be true.

If the men in black embody the alien among us, the "dero" of the 1940s "Shaver Mystery" represent the alien within. Emerging from the troubled unconscious of a metal worker named Richard Shaver, promoted by a science fiction editor named Raymond Palmer, this grim gospel told of the perverted, dwarfish descendants of ancient space colonists who inhabit the caverns beneath our feet. They torment us surface folk with their "disintegrating rays"; they kidnap us for orgies of torture; they maintain active commerce with beings from other planets. When "flying saucers" suddenly filled American skies in the summer of 1947, following a landmark sighting over the Cascade Mountains, Shaver's devotees could say: we told you so.

On July 8, 1947, officials at Roswell Army Air Field declared themselves in possession of a "flying disc" that had landed on a ranch northwest of the town. The claim was debunked and sank into obscurity, re-emerging thirty years later to become the "seminal event in UFO history." In the process, it transformed itself from a banal mystery of fallen debris into a profound and gripping myth of mortal divinity—sky-riding gods who are frail and childlike, shattered and slain—tailored for the space age that's also the nuclear age. At the myth's heart is death, not only of the individual but of the species, which in 1947 had just become a realistic possibility. Its warning: child-humanity, straining toward the skies in arrogant self-regard, crashes to absolute and permanent extinction.

One hot summer night in 1974, a man and a woman stood naked before a sky-borne entity which they experienced as a glowing disk. They were the former Beatle John Lennon and his girlfriend May Pang, and although they were hardly conscious of re-enacting Adam and Eve's experience before God in the Garden of Eden, that's precisely what they were doing. Their encounter with the numinous, the alien, was a template hard-wired into the human unconscious. It typifies the UFO experience as a religious event, part of the myth that is UFO lore. Like the rest of the UFO's "hidden story," it expresses a mystery that has nothing to do with extraterrestrials or spaceships but is part of the most ancient mystery of all: what is this two-legged, two-gendered being that lives yet knows it must die? Who is this creature, us?