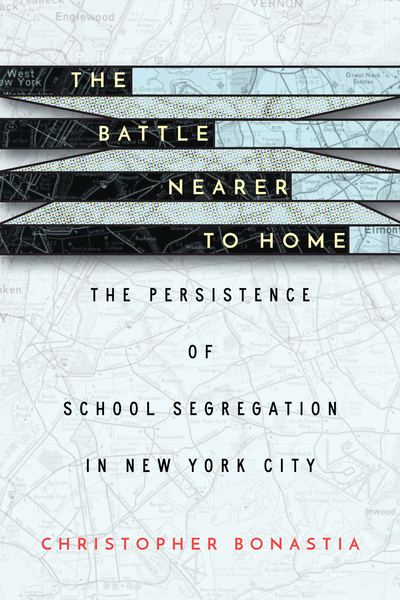 Since the 1954 Brown v. Board of Education decision, New York City repeatedly has vowed to be proactive in reducing school segregation, yet city schools remain highly segregated by race and class. Its actions have not reflected the city's self-image as a racially progressive metropolis. Instead, New York created and maintained a school system that features pockets of managed integration while relegating most Black and Latino students to segregated, under-resourced schools. Education officials have perpetuated this system through the use of border checkpoints to manage integration and segregation. Checkpoints can be physical, administrative, or meritocratic. These checkpoints can take various forms, including locating schools in segregated neighborhoods, delaying action on pro-integrative measures, and screening applicants to schools on the basis of grades and standardized test scores.

Following the Brown decision, educational activists pressured the Board of Education to be proactive in support of school integration. The board responded by creating the Commission on Integration tasked with charting a path forward for school integration. Its most controversial recommendations advocated school zoning changes to increase integration and mandatory teacher rotations to assure that students in low-income schools no longer were taught by less-experienced teachers who were often substitutes. Most teachers organizations objected to the latter proposal. Ultimately, the city failed to act on the commission's most meaningful recommendations, a pattern that would repeat itself with subsequent city-sponsored investigations of educational inequality. Activists continued to fight against racial inequality and segregation in NYC schools. The late-1950s cases of the Harlem Nine and the opening of a segregated middle school in Bedford-Stuyvesant, Brooklyn (JHS 258) are analyzed.

In 1959, the Board of Ed announced that it would transfer a cohort of Black and Puerto Rican elementary-age students from Bedford-Stuyvesant, Brooklyn, where schools were severely overcrowded, to underutilized schools in the nearby Queens neighborhoods of Ridgewood and Glendale. Residents of the overwhelmingly white Queens neighborhoods exploded with rage, accusing the board of bringing juvenile delinquents into their schools. In subsequent years, the school integration movement gained steam. In February 1964, nearly half a million New York City youth boycotted schools for a day to protest school segregation. Shortly thereafter, a citywide anti-integration countermovement emerged. In March, an overwhelmingly white crowd of fifteen thousand marched on City Hall and Board of Ed headquarters to protest virtually every mechanism for integration. Four days after that, a second pro-integration boycott took place, though on a smaller scale than its February predecessor.

A 1964 report criticized past Board of Education efforts on integration but cast doubt on the prospects for future progress. The board largely ignored the recommendations to increase integration. In July 1964, uprisings in Harlem and Bedford-Stuyvesant—prompted by the police killing of a Black teenager—roiled New York City. On the first day of the 1964–65 school year, over a quarter of a million white students boycotted to protest the pairing of predominantly Black and predominantly white elementary schools in four locations. In Brooklyn Heights, liberal white parents initially embraced the pairing of two nearby schools to increase integration, but many soured quickly on the experiment, dispatching their children to private schools. There were small groups of white parents who were proactive in their support of school integration, voluntarily sending their children to predominantly Black schools.

This chapter traces the evolution of activist demands from integration to community control of schools in Black and Puerto Rican neighborhoods. The turn to community control occurred after persistent demands for integration failed to yield meaningful action from the Board of Education. In Brooklyn, as a last-ditch effort for integrated schools, activists called for the creation of enormous educational parks that would foster integration and offer students the latest in technology and an expanded array of course offerings. They were rebuffed. Citywide, parents and activists increasingly insisted that the board had reneged on its obligation to provide quality education and that local communities should have a greater say in school personnel and budgeting. The board approved the creation of three experimental school districts—in Ocean Hill–Brownsville, Harlem, and the Lower East Side—to gauge the viability of this concept.

When the community control experiment began in 1967–68, local parents and new teachers in Ocean Hill–Brownsville complained that remaining union teachers were attempting to sabotage the experiment. In May 1968, the OHB Governing Board terminated nineteen union teachers and administrators. The United Federation of Teachers was apoplectic, claiming the staffers were fired without due process. That fall, after OHB had hired nearly a full contingent of replacement teachers, the UFT launched three citywide strikes that crippled education in most of the city; OHB schools remained open. The UFT accused Ocean Hill–Brownsville of blatant anti-Semitism, an accusation the OHB Governing Board denied. In April 1969, the state legislature effectively dismantled the community-control districts. Students who attended OHB schools during the UFT strikes recall a rewarding experience in which they were respected and valued as students and Black and Puerto Rican cultures were celebrated.

In Washington, DC, Southern senators fought against the double standard that applied to school segregation: aggressive enforcement in the South, where schools had been segregated by law, and a laissez-faire policy elsewhere, where school segregation had occurred in practice. They were joined in their call for a national school desegregation policy by Connecticut liberal Abraham Ribicoff. While Ribicoff wished to see school desegregation enforced outside the South, his Southern colleagues were seeking to relax enforcement in their region. In early-1970s New York, a group of Black students in Brooklyn endured a dispiriting battle to find schools that would enroll them: they were treated as unwanted intruders. Later that decade, the city school system faced the threatened withdrawal of federal funds for violating civil rights laws prohibiting discrimination.

From the mid-1970s to the early 2010s, the fight for school integration in New York City was essentially moribund. A 2012 report on the high degree of segregation in NYC schools and a 2014 one labeling New York the most segregated state school system in the US spurred a revitalized integration movement led by students. While Chancellor Richard Carranza argued for integration as a top priority, and several local school districts made efforts to increase integration, Mayor Bill de Blasio was not supportive of systemwide integration even prior to the COVID-19 pandemic. Student activists from organizations such as IntegrateNYC and Teens Take Charge have continued to exert pressure on school officials to dismantle school segregation by eliminating academic screens from the junior high and high school admissions processes.

9 Learning from the Past and Moving Forward
chapter abstract

The type of integration envisioned by New York City student activists does not depend on proximity to whiteness or merely moving bodies around. They envision a school system in which there are no longer a clearly identifiable set of "good schools"—populated primarily by white and Asian students, with ample resources, responsive faculty, and an array of courses and extracurricular activities—and a much larger contingent of "bad schools" — populated by Black, Latino, and some Asian students, and lacking these characteristics. In the nearly seven decades since Brown v. Board of Education, New York City school officials have extolled integration but have been reluctant to take action that might cause white families to exit the school system. With white students comprising 15 percent of the public school population, allowing those families to informally veto policies that would improve education for the majority of students is unjustifiable.