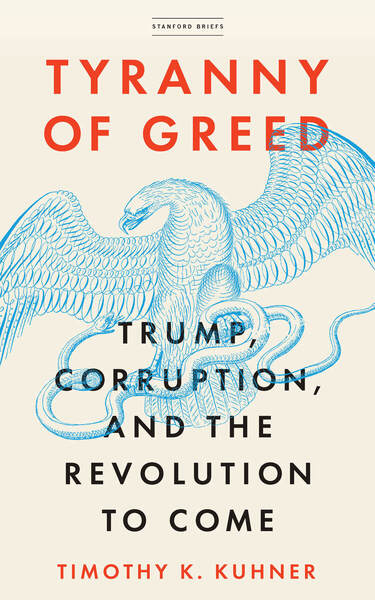 Tyranny of Greed
Trump, Corruption, and the Revolution to Come
Timothy K. Kuhner

Thus far, the twenty-first century is thrashing humanity with a sort of violence generally confined to science fiction or biblical times.

Even before the COVID-19 pandemic, a global catastrophe was well underway. Political analysts warned of democratic decline and rising authoritarianism. Economists uncovered alarming levels of inequality and capital concentration. Sociologists noted a resurgence in racism, sexism, and xenophobia. Scientists documented extreme temperature fluctuations, natural disasters, and an ongoing mass extinction. But in contrast to the pandemic, there has been no serious response to our social and environmental disintegration.

How could there be? The force that’s ravaging the world is bound up with our way of life—with our values and belief systems, our economies and technologies, the laws we’ve passed (and failed to pass), and the leaders we’ve elected. So long as those leaders claim to understand our problems and to be doing something about them, most of us keep going about our lives without any serious change in worldview or behavior. We banish our lucid thoughts from the stage to the balcony. There, looking down on the characters in some futuristic dystopia or time-worn tragedy, our conscious awareness disassociates itself from humanity’s plight.

This coping mechanism has been stretched to the limit since 2016. During his campaign and first presidential term, Donald J. Trump became a transparent catalyst for political corruption, crony capitalism, prejudice, and climate change. That break from the cosmetic righteousness of past administrations has made it harder to continue sleepwalking towards catastrophe. People now flock to catastrophe, as though it were salvation, or throw a fit about it, as though it were a personalized insult. Whether enthralled or enraged, we’re surely more committed and more polarized than before. But I doubt we’re any more conscious.

Dreams of such violent intensity can’t last long. It’ll all be over in November of 2020, we tell ourselves, or 2024 at the latest. But that’s just another coping strategy. Even a clean electoral sweep by the Democrats wouldn’t respond to the underlying causes of Trump’s rise to power or reverse the long-term effects of his presidency. Awakenings can’t be delegated. Plus, Democrats have long been complicit—not in Trump’s specific wrongdoings as Republicans have, but in the overall perversion of government that he has stoked and capitalized on.

We won’t have all the facts about Trump’s presidency for some time. The automatic declassification process doesn’t begin until 2045 and the most sensitive government documents won’t be made public until 2095.1 But awareness and power depend more on perspective than they do on data.

This book examines today’s democratic crisis from a number of uncommon perspectives, including religion, evolutionary biology, psychology, and even astrophysics. And when it comes to the usual lenses of law, economics, and political science, it applies them to surprising time periods and settings. Why such an unconventional approach? Because, rather than an isolated event, I see Trump’s presidency as the natural culmination of our moment in history—especially the parts we’ve neglected or forgotten.

Celebrating our sins as though they were virtues, he has brought us to the crossroads. Exploiting every weakness, he has pushed democracy to the brink. Rarely has such a portal into the moral, spiritual, and revolutionary dimensions of politics been opened. To all who dare look him in the eye, Trump offers an honest reckoning; and that, I believe, is what the twenty-first century has been asking for all along.