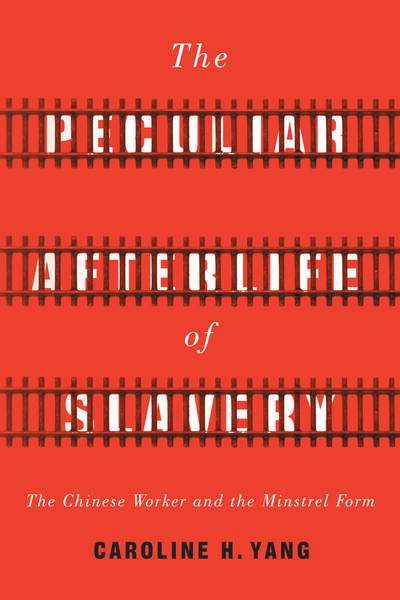 The Peculiar Afterlife of Slavery
The Chinese Worker and the Minstrel Form
Caroline H. Yang

The introduction establishes the focus of the book: the relational racializations of Chinese workers and Black people during Reconstruction through the lens of blackface minstrelsy. It shows a connection between the exclusionary politics that aligned Chinese labor with slavery and cultural representations through which the minstrel form lived on after emancipation. Arguing that the violence of slavery and minstrelsy are inextricable, Yang tracks the racial logic of antiblackness of both through the unlikely figure of the Chinese worker in literature, especially about the American West. Doing so allows for seeing links between slavery and capitalism, and U.S. settler colonialism and U.S. imperialism. Through justifying reading canonical white American authors such as Bret Harte, Mark Twain, and Ambrose Bierce alongside writers of color such as Sui Sin Far and Charles Chesnutt, the chapter ultimately argues for a practice of reading literature that enables a reimagining of historical possibilities of the past.

Chapter 1 begins with a close reading of Bret Harte's poem, "Plain Language from Truthful James" (1870), which was wildly popular and coined the term "heathen Chinee." Yang contextualizes the poem in the changing definitions of the word heathen, associated with Blackness but reworked to refer to the Chinese as "slavelike" during Reconstruction. Underscoring the connection between the poem and slavery, the chapter argues that Harte's Chinese character reveals traces of Uncle Tom's Cabin's Topsy, one of the most iconic antebellum minstrel figures. Harte's subsequent short stories attempted to separate his Chinese characters from Topsy, for the sake of producing a distinctly American humor located in the West. In this ultimately unsuccessful attempt, we can see how the minstrel form and antiblackness were gestural, a part of the everyday and the mundane in the late nineteenth century.

Mark Twain is heralded as the "Lincoln of Literature," but he was an avowed fan of blackface minstrelsy. Chapter 2 builds on the scholarship on Twain and minstrelsy by examining how Twain attempted to incorporate the minstrel form in his writings toward the goal of developing a unique narrative voice at the beginning of his literary career. He did so not through Black characters but through Chinese and Native characters. Tracing the minstrel form in the settler-colonial space of the West, this chapter proposes reading Twain's early experiments with the minstrel form, particularly his representations of Chinese characters in his writings in The Galaxy, as revealing the racial logic of slavery that saw Blackness as a fungible commodity.

Chapter 3's history of blackface minstrelsy in San Francisco argues that Ambrose Bierce's short story, "The Haunted Valley," about a murdered Chinese worker, restages a minstrel show that replicates its customary format of featuring an interlocutor and two end men. The story exposes the hypocrisies of white men who, through their performances and narratives, purport to know the racialized nonwhite other. Despite this endeavor, by using minstrelsy to argue against anti-Chinese racism but remaining silent on the history of slavery, the story forecloses a critique of antiblackness. As seen in his other stories that also invoke the minstrel form, Bierce's objection to minstrelsy did not extend to the form's dehumanization and derivation of pleasure from Black suffering in slavery. Yang argues for reading such a shortcoming through Toni Morrison's concept of "Africanist presence," accounting for the absence of Blackness crucial to the construction of whiteness in U.S. literature.

Chapter 4 examines Sui Sin Far's early fictions that feature Chinese female "slaves" and Black female characters. Yang reads "Ku Yum," which refers to Chinese women characters as "slaves," alongside the rhetoric of early U.S. white suffragists who argued that their condition of rightlessness was chattel slavery. As a means of reading Sui Sin Far's early stories for not what she can teach us about Chinese slavery or women but for how representational practices, such as blackface minstrelsy and vaudeville dialogues, continued to influence literary and cultural imaginations about Black women after emancipation, Yang reads "Ku Yum" together with "Away Down in Jamaica." Particularly through the figure of the "yellow girl," "Away Down in Jamaica" provides a heuristic for how we might read the enduring legacy of antiblackness and slavery in literature and culture, specifically what Hortense Spillers calls the "misnaming" and "ungendering" of the figure of the Black woman.

5 Reading the Minstrel Tradition and U.S. Empire through Charles Chesnutt's The Marrow of Tradition
chapter abstract

The final chapter emphasizes the point that the racial logic of antiblackness and the enduring legacy of blackface minstrelsy had specific material consequences for Black people. Charles Chesnutt's The Marrow of Tradition critiques not only the failures of Reconstruction but also the ways in which antiblackness as a cultural form, particularly through blackface minstrelsy, makes up the core of U.S. cultural and literary tradition, inseparable from the violence of U.S. empire. Yang situates the novel in the context of wildly popular "coon songs." Responding directly to such songs, The Marrow of Traditions highlights the specificity and incommensurability of antiblackness, as illustrated in the violence against Black people in the novel. Chesnutt connects that violence with the violence of U.S. imperialism overseas, highlighting the global ramifications of antiblackness at the heart of U.S. empire in the aftermath of not only slavery but also the failure of Reconstruction in the South.