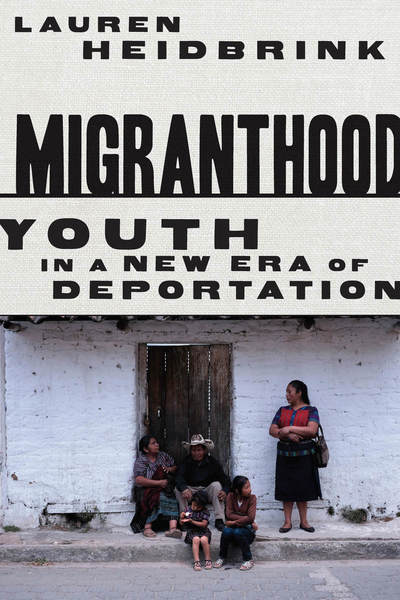 Migranthood
Youth in a New Era of Deportation
Lauren Heidbrink


It was unexpected. My father died in a car accident and my mother was left with the four of us to care for alone. We sold the few things that remained in the house—the bed, the dresser, the stove, our güipiles [traditional blouses]—so we could pay for the funeral. We still did not have enough, so we mortgaged the house. We buried my father, but not even properly, and we took the rest to pay for my passage. I’m the second daughter; my sister did not want to go, but I did. I wanted to support my family, to help my mother, and to send my little brothers to school . . . I was scared though, worried about getting raped, but I knew I must go. I figured it’s better to die trying than to die here not able to contribute. It didn’t go as planned. I was caught and returned three times. The debt was heavy; we could not pay it off. The bank took our home and the land underneath it. That was three years ago. Now we live here in my uncle’s home. We lost everything—our father, our home, my reputation. My sister says she will try. God willing, she will find better luck.

The Guatemalan government treats us like we don’t belong—even on the lands of our ancestors—and blocks us at every turn. Bad schools, no work, no medical care. They treat us like indios sucios [dirty Indians] while they rob gold from under our lands. Believe me, I never wanted to migrate. I’d heard the stories from my cousin—about the dangers of the journey, living in a cramped apartment, working twenty hours a day and never saving—but I had no choice. My mother and sister got sick; the [Marlin] mine contaminated our water and spoiled the crops. They call it “desarrollo” [development], but it is not developing our communities; it is devastating them. They are killing us slowly.

I had a nightmare that Manuel was in a warehouse. He was injured; I saw blood. He was calling my name begging me to help him escape. My husband told me it was just me dreaming about the massacre of all of those [Central American] migrants in Mexico. You know, the one in San Fernando that killed so many of us. My husband told me it was just a bad dream, that Manuel would arrive in the United States soon and call us, but I can tell he was worried too. Then I received a call from someone demanding money, [saying] that they would hurt Manuel if we did not send it in two days. We borrowed money from everyone we knew, my brother sent money from California, we sold what we could to send 35,000 quetzales [4,600 USD]. People tell you these things are tricks, that people get some information and take advantage. They say it is probably the cartels or gangs or even the government trying to deceive us. Whoever they are, I know it is real; I feel it in my heart and in my bones. He is a responsible son. He would call if he could. He only wants to care for his newborn. We’ve searched, now two years, and wait for his call.

LETICIA, JUAN GABRIEL, AND MANUEL are three of a growing number of young people migrating unaccompanied from Central America to the United States. Often dismissed as simple victims of poverty or stigmatized as gang members, these young people are social actors who contribute to the survival of their households through their care, labor, and mobility. Leticia tends to her siblings, works on the family farm, and following her father’s untimely death, migrated to ensure her family’s survival. In spite of his desire to remain in his hometown of Sipacapa, Juan Gabriel migrated due to the environmental repercussions of a Canadian gold mine that imperiled his mother’s and sister’s health when it contaminated the soil and local water sources. The U.S. and Guatemalan governments contend that foreign investment—often in the form of extractive industries, free trade zones, and agricultural initiatives—create alternatives to migration through employment opportunities, improved infrastructure, and investment that, in theory, trickles down to communities. For Juan Gabriel, however, the adverse consequences resulting from “development” in tandem with a failing public health system spurred his transnational migration. Manuel, confronted with few economic opportunities and institutionalized racism against Indigenous peoples, migrated to provide for his newborn son, only to be disappeared in Mexico, which, over the last twenty years, has grown increasingly perilous. Amid the proliferation of transnational gangs, corrupt police, and heightened border enforcement through zones of transit, migrating from Central America to the United States has increased in both cost and risk. Now two years since his disappearance, Manuel’s whereabouts continue to be a source of anguish to his mother, Elena.

The experiences of young migrants like those of Leticia, Juan Gabriel, and Manuel are regularly overlooked, ignored, or discounted. They are relegated to simplified tropes of children left behind, abandoned, or dependent upon the actions and outcomes of adults. When the media and policymakers acknowledge young people’s migratory experiences, their perspectives often are overshadowed by advocates who claim to speak on their behalf. In contrast, Migranthood chronicles young people’s long-term trajectories of migration and deportation from their own perspectives. Through research with Indigenous children and youth in diverse spaces and geographies—in communities of origin in Guatemala, zones of transit in Mexico, detention centers for unaccompanied minors in the United States, government facilities receiving returned children in Guatemala, and communities of return—young people share how they negotiate everyday violence and discrimination, how they and their families prioritize limited resources and make difficult decisions, and how they develop and sustain relationships over time and space. In other words, their lives are so much more than the migranthood ascribed to them.

Alongside young people’s diverse migratory trajectories, Migranthood traces how securitized approaches to migration management, often under the guise of “development,” is a mode of governance that moves across and beyond geopolitical space. National and regional securitization programs, border externalization policies, and detention and deportation are enlisted to manage desired and undesired migrants, increasingly ensnaring children and youth in this global immigration dragnet. Although cast as objects of policy, not participants, Indigenous youth are not passive recipients of securitization policies, development interventions, or discourses of migranthood. Drawing on the resources of transnational kin, social networks, as well as financial institutions and actors, Indigenous youth enlist a rich social, cultural, and political repertoire of assets and tactics to navigate precarity and marginality in Guatemala. By attending to young people’s perspectives, we learn the critical roles they play as contributors to household economies, local social practices, and global processes. In a new era of mass deportation, the insights and experiences of young people likewise uncover the transnational effects of the securitized responses to migration management and development on individuals and families and across space, citizenship status, and generations.

This book is an extension of my ongoing commitment to the Guatemalan community that began long before I became an anthropologist. In 1999, I traveled to Guatemala for the first time to serve as an election observer. It was the first free election since the end of Guatemala’s thirty-six year armed conflict, one of Latin America’s bloodiest. At the time, I worked at a torture treatment center in Chicago where many Central Americans escaping brutal conflicts throughout the region sought asylum. In Chicago, I would come to work with political organizers, former guerrillas, trade unionists, journalists, university students, and Indigenous leaders who were targeted for their efforts to oust a U.S.-backed military dictatorship that brutalized their families and tore apart their communities. Some were Indigenous teachers who dared to organized adult literacy classes; others were community members who simply congregated to pray at the local Catholic church. Many were targeted solely because they are Indigenous—their ancestry held as a justification for their extinction.

In support groups, survivors shared how their families were disappeared in broad daylight by military-trained death squads in unmarked vehicles and how their children were killed in front of them. In immigration courtrooms, survivors were compelled to detail the gruesome torture techniques inflicted upon their bodies and minds, techniques military officers learned in trainings at the infamous U.S. School of the Americas (now named the Western Hemisphere Institute for Security Cooperation). Survivors carried both ambivalence and anger at seeking refuge in the United States, a country that had orchestrated the assassination of democratically elected president Árbenz Guzmán in 1954, spiraling Guatemala into a series of authoritarian regimes. In therapy sessions, I interpreted for women as they recounted experiences of brutal gang rapes and the emotional and social aftermath. In hospital waiting rooms, where I accompanied survivors for treatment of the enduring physical consequences of torture, they shared how state terror tore their families apart, disappeared loved ones, displaced communities, and produced a culture of fear that has pervaded everyday life for generations.

In my time working with Central American immigrant communities in Chicago and later in a community health center in Momostenango receiving refugees returning from Mexico, I learned the history of Guatemala—its colonial violence, internal displacements, and social suffering. I learned of the darkest dimensions of humanity, the depths of which continue to haunt me. I also witnessed how people organize and find hope amid the generations of traumas inflicted upon their families and communities. I learned the complex ways migration has figured and continues to figure in the lives of Maya people in Guatemala—as a response to violence, natural disasters, poverty, foreign destabilization, development promises, and environmental degradation; as a rite of passage; and as a cultural elaboration of care. Now twenty years later, I examine the insidious, intergenerational effects of this historical violence and its contemporary manifestations on their children and grandchildren—Leticia, Juan Gabriel, and Manuel—in “postconflict” Guatemala.

1. Following disciplinary custom, I enlist pseudonyms for all research participants. I conducted all interviews in Spanish or English with occasional interpretation from Mam and K’iche to Spanish. All Spanish translations are my own.