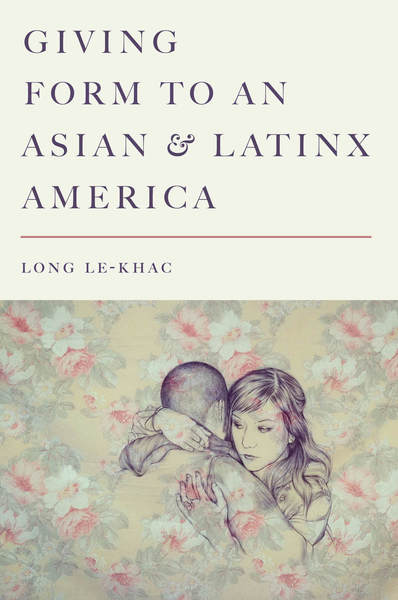 Giving Form to an Asian and Latinx America
Long Le-Khac

The introduction opens with a little-known historical connection between Asian Americans and Latinxs: U.S. escalation of the Vietnam War in March 1965 shaped the U.S. invasion of the Dominican Republic just a month later. The opening shows how a shared transfictional form in Vietnamese and Dominican American fictions helps perceive this entanglement of distinct communities in the Cold War. The introduction clarifies the formation of an Asian and Latinx America and the urgent stakes of solidarity between Asian Americans and Latinxs. It argues for comparison through aesthetic form as a method of comparative ethnic studies, and it theorizes transfictional form, its relation to the novel and short story cycle, and its purchase on the social tensions linking these communities. It outlines the differentiated yet linked immigration history that makes alliance between these groups difficult to envision. It concludes with a chapter overview.

The chapter follows Mexican Americans and Chinese Americans confronting the uneven opportunities of the post-civil rights period. In this moment, the bildungsroman, a genre with an individual-centered hermeneutics, reinforced the neoconservative politics of individual development central to the backlash against civil rights reforms. Troublingly, bildungsroman hermeneutics also pervades reading practices, as seen in the criticism on The House on Mango Street (1984) and The Woman Warrior (1976). Developing approaches beyond this hermeneutics, the chapter traces how Sandra Cisneros and Maxine Hong Kingston, alongside African American writer Gloria Naylor, use transfictional form to decenter the bildungsroman's social vision and outline collective shapes for feminist ethnic mobility. Their works stage tensions between the protagonist's development and other characters whose stories cannot progress, unveiling the divisions between minority individuals who rose and the many still stymied by collective inequalities.

This chapter focuses on a post-Cold War generation of Asian Americans and Latinxs struggling with American narratives that disconnected U.S. violence in the Third World from the Third World migrations entering the U.S. Junot Díaz's Drown (1996) and Aimee Phan's We Should Never Meet (2004) deploy a transfictional tension between narrative borders and border crossings to narrate the violently ruptured yet linked histories of the Dominican and Vietnamese diasporas. Díaz develops a transnational chronotope connecting Dominican immigration to the history of U.S. invasions of that nation. Phan charts the displacement of Vietnamese refugees as inseparable from the circuits of U.S. empire and outlines communities of shared fate for refugee routes. This chapter reframes the immigrant and refugee as intertwined categories justifying U.S. interventions. It uncovers how Asia and Latin America were linked in a global military project and looks across the regional divides in histories of the Cold War.

3 Unsettling Strata and Type: Divided Communities of Neoliberal Immigration in Karma and The People of Paper
chapter abstract

This chapter examines the neoliberal era of stratified immigration that produces a discrepant range of immigrant fates—from undocumented labor to knowledge workers. Salvador Plascencia's The People of Paper (2005) and Rishi Reddi's Karma (2007) depict Asian American and Latinx communities divided by neoliberalism. The chapter shows how these works transpose major and minor characters to unsettle narrative hierarchies that govern who centers stories of ethnic communities. These transpositions destabilize the reductive forms of racial stereotypes and neoliberal valuations. Scrambling perceptions, Reddi and Plascencia highlight disadvantaged immigrants that belie the idea of Indian American success and upwardly mobile youths that complicate the idea of the Mexican American "underclass." Linking groups that inhabit opposite ends of the immigration system, this chapter reveals their shared struggles with the unequal life chances that neoliberal immigration has wrought. It shows the linked projects of wealth and labor extraction in Asia and Latin America.

4 Forming Panethnicity: The Book of Unknown Americans and the Comparative Work of Latinidad
chapter abstract

The unified identities driving earlier moments of identity politics can no longer be taken for granted given the diversification of Asian American and Latinx communities. This chapter brings together the debates on panethnicity in Latinx and Asian American studies to show how their central impasses are aligned. The chapter argues for rethinking panethnic identity, a political fiction, with panethnic literary fictions. Cristina Henríquez's The Book of Unknown Americans (2014) uses transfictional form to express the antagonisms between panethnic unity and multiplicity. The novel tells stories of migrants from across Latin America. These stories intersect but do not merge into any narrative unity. Transfictional form, this chapter argues, recognizes the Latinx differences that prevent Latinx experiences from being told in any one story. This form simultaneously guides the comparative thought needed to envision new shapes of panethnic alliance that link Latinxs to each other and to broader formations.

5 Imagining Unity: I Hotel and the Utopian Horizons of Asian America
chapter abstract

This chapter reimagines identity politics alongside Karen Tei Yamashita's novel about the Asian American movement, I Hotel (2010). The novel's converging and diverging form renders panethnic movements as a flux of unity and dissolution and a network of slippages across ethnic boundaries. This form situates conflicts within the Asian American movement as part of broader social contradictions. Internal conflicts can orient panethnic coalitions to a systemic and utopian horizon of justice. Utopian horizons help reconsider unity and closure, ideas critiqued by the politics of difference embraced in Asian American and Latinx studies. This chapter recasts panethnic unity not as a political premise but as a promise to struggle for, a horizon for imagining the just future that would make unity free of contradiction possible. It calls Asian Americans and Latinxs to look beyond their circumscribed borders and see their internal struggles for unity as entangled with systemic projects of justice.

Conclusion: A Politics of Beyond
chapter abstract

The conclusion explains how fictional world-building can generate theoretical models of the social worlds Asian Americans and Latinxs navigate. Transfictional world-building draws readers beyond the borders of a story. This aesthetics can inspire a politics of beyond in which Asian Americans and Latinxs look beyond their own community borders to see their interconnections. A politics of beyond calls Asian American and Latinx coalitions struggling to define their boundaries to instead embrace their porous borders and political entanglements with each other. The conclusion suggests the potential power of such solidarities to address the conditions that formed and continue to trouble the Asian and Latinx U.S. The book concludes that engaging in Latinx struggles is essential to Asian American politics and vice versa. The Asian and Latinx American political solidarity we need to meet this idea requires a leap of imagination, which is why fiction is so vital.