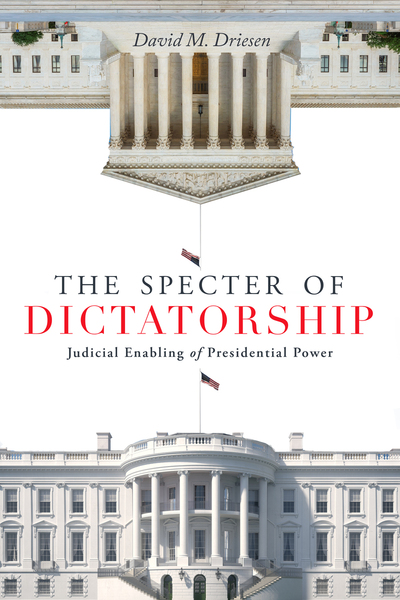 This book addresses judicial treatment of presidential power in an age of democratic decline. Many commentators have criticized the Supreme Court’s separation of powers jurisprudence as overly deferential to the President, especially in the overlapping areas of national security and foreign affairs. Some scholars, however, have defended the Court and even urged the Court to expand its support for presidential control of government domestically, arguing for a unitary executive theory that claims that the President enjoys complete control over the executive branch of government. The Court embraced this theory in 2020, but kept in place precedents in great tension with the theory.1

I wrote this book because Donald Trump’s election suggests that the courts and constitutional law scholars need to take the possibility of autocracy more seriously than we have in the recent past. I say recent past, because many of the founders of our country—those who framed and ratified the Constitution—were very concerned with the possibility of the republic they tried to establish becoming an autocracy, a country ruled by a despot. Indeed, a major purpose of the Constitution was to avoid a reversion to autocracy when an ambitious leader became President. This book asks whether this purpose has received too little attention in our contemporary separation of powers jurisprudence. While originalists usually support expanded presidential power, I show that originalism supports giving great weight to avoidance of autocracy.

The debate about American separation of powers jurisprudence, however, has been too parochial. It has almost always focused on our Constitution’s text, our Supreme Court’s decisions, our political history, our founding fathers’ intent, and our scholars’ ideas.

Our founding fathers were less parochial than we are. They had no choice. As the United States did not yet exist, they drew their ideas for avoiding autocracy from the writing of foreign scholars, experience in other countries, and their own experience as subjects of a monarchy.2

The Specter of Dictatorship suggests that fulfilling the Founders’ goal of establishing a permanent republic requires us to examine the experience of countries that have lost, or nearly lost, democracies in recent years. Accordingly, this book examines the loss or erosion of democracy in Hungary, Poland, and Turkey to see what we might learn about how societies lose democracies, in the hope that these countries’ experience might teach us something about how to keep ours intact. Since this book aims to evaluate the potential of separation of powers jurisprudence (broadly conceived) to protect democracy, it focuses on the institutional history of democracy loss. It primarily evaluates the role of the head of state in democracy decline. But it necessarily considers the roles of the legislature and the courts in advancing or retarding loss of democracy, both to contextualize the analysis of presidential power and to analyze the potential role of judicial decisions on presidential power in checking a drive to autocracy. It draws on the literature providing political explanations for loss of democracy primarily to test the idea that separation of powers jurisprudence may have something to contribute to limiting or slowing democratic decline when powerful political factors drive a country toward autocracy.

The Specter of Dictatorship, then, seeks to implement in a limited way a suggestion animating Tocqueville’s great work, Democracy in America—that America might learn something from experience with other people’s mistakes.3 Tocqueville, however, saw a predicament for American democracy. If democracy experiences a real crisis, unlike the fake ones created at least every few years through the hysteria around elections, it might not survive it. And if democracy manages to survive its crises, as American democracy has in the past, a society might view these crises as “false alarm[s]” or as proof that democracy “can survive any crisis.” As David Runciman writes in The Confidence Trap, “recovering from your mistakes can make you reckless.” This book seeks instead to use experience abroad to make us wise and even to see connections between our own crises and the possibility of losing democracy that history demonstrates always exists.

Tocqueville, however, entertained doubts about whether America’s insularity made it “capable of learning” from other countries’ experience. My concern that this may remain true informs this book as well. In particular, a case for our judges to learn from other countries requires a justification rooted in our own experience. I show not only that we can learn valuable lessons from abroad, but also that our own experience suggests that some of our predecessors had learned these lessons by looking at foreign models available to them.

At the conclusion of the Constitutional Convention, Benjamin Franklin was asked whether we have a republic or a monarchy. He famously replied, “A Republic . . . if you can keep it.” When we took our place as a democratic island in a sea of monarchy, keeping a republic was not a foregone conclusion. As autocracy spreads throughout the world,4 the question of how law can help sustain a republic deserves some fresh attention.

I dedicate this book to my children, Kim, Mai, and Mirrah. My hope that they might live their lives in a democracy as I have motivated me to undertake this work.