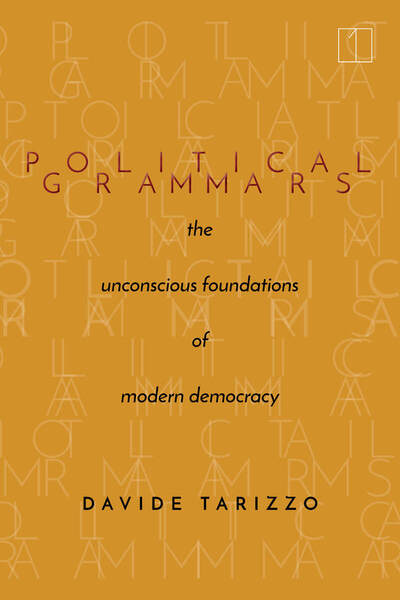 In the first half of the introduction, the idea underlying the entire theory of political grammars is presented. According to Lacan, the Cartesian cogito ergo sum is a fiction grounded in unconscious phantasies that can be analyzed in terms of private grammars. Such grammars ensure that the first-person singular perspective remains relatively invariant over time: today as yesterday, I am I. The same kind of explanation can be extended to the first-person plural perspective: "we the people" remain the same with the passing of time. In more technical terms, Lacan's theory of subjective grammars helps us to understand how the "intertemporal unity" of modern political subjects (peoples, nations) is achieved. In the second half of the introduction, a chapter-by-chapter summary of the book is given.

There are two major paradigms of modern scientific investigation: the experimental and the clinical. Physics, for example, adopts an experimental approach to the study of nature, whereas medicine is based on both research methods. The epistemological foundations of psychoanalysis, however, are wholly clinical, since psychoanalysis describes and interprets human subjectivity in purely clinical terms. From this it follows that it is possible to study modern political subjects from a psychoanalytic point of view. Indeed, subjectivity (namely, the first-person perspective) can be either singular or plural; the ego and the nos are two forms of subjectivity; and in either case, the subject—which Lacan defines as a necessary illusion, or a true fiction—follows the same general laws.

2 Emancipative Grammars: Laclau, Heller, and the People We Are
chapter abstract

Laclau understood social heterogeneity as a mandatory prerequisite for democratic struggles. Heller took the opposite view and considered social homogeneity to be the sine qua non of any democratic mobilizations. By exploring the pros and cons of these theories, we see that both social heterogeneity and homogeneity are necessary for the proper functioning of democracy, but at the same time it appears that, contrary to Laclau's and Heller's opinion, there is no need to conceive of such conditions as natural, or ontological, requirements. Rather, these conditions should be thought of as the two sides of the same coin, as the two components of a single process—that is, democratic subjectification—through which we become the people (the nation) that we are.

3 Human Properties; Villey, Macpherson, and Our Right to Be
chapter abstract

This chapter is divided into three sections. The first section explains in further detail Lacan's theory of the subject, with special focus on the notions of grammar and phantasy. The second section centers on Freud's group psychology and summarizes some of his insights into collective subjectivities. In the third section, Lacan's theory of subjective grammars is used to examine two key episodes of modern political history, the American War of Independence and the French Revolution of 1789, which marked the birth of two modern nations with different characteristics. Interestingly, neither the French nation nor the American people acquired any clear national identity during or after the insurrection. Rather, they went through a stormy process of political subjectification that left the question of national identity wide open. In both cases, a political grammar was instrumental in achieving this result.

Broadly speaking, it can be said that critical theory studies society from a clinical point of view, as it concentrates mainly on social suffering. Yet there exist different paradigms of critical theory. Here emphasis is placed on Foucault's approach to critical theory, in particular on his "critical ontology of ourselves," which is reminiscent of Freud's argument about "historical truths." Foucault's version of critical theory is actually more productive than Adorno's negative dialectics and Derrida's deconstruction, not least because it allows us to clarify some of the paradoxes generated by the modern notion of freedom and its concrete application in the field of politics. As Foucault explains in his seminars on liberalism, these paradoxes paved the way for the development of biopolitics and shed light on the ambiguous nature of modern States.

Democracy is based on the assumption that we the people form a body politic and govern ourselves. The theory of political grammars explains how this assumption is made and put into practice. Many individuals turn into one sovereign people when they take control of the state in which they find themselves living. To this end, they protest that the state has not yet recognized some of their natural, unalienable rights. Once these rights are ratified as the rights of the citizen, the people who claimed them become sovereign over the state; but in order to keep democracy alive, this process must be continued. Thus, democracy hinges on the permanent interchange between (the rights of) the citizen and (the rights of) man as such, an interchange that political grammars secure through tropes: a democratic people is either a metaphor or a metonymy of a society composed of true human beings.

7 From Democracy to Fascism
chapter abstract

Political grammars such as nationalism revolve around metaphors: the existing nation turns into a metaphor of the true nation to come. As a result of this, social homogeneity gains priority over social heterogeneity and becomes the goal of all nationalist mobilizations. But perfect homogeneity and equality among citizens, namely collective happiness, remains out of reach. The purely metaphorical connection between the existing nation and the alleged true nation formed of genuine human beings prevents the nationalist subject from discerning its own nature and authentic identity. Fascism is an attempt to bridge the gap between the existing nation and the true nation once and for all. Such an attempt gives rise to a new pseudo-democratic and ultranationalist grammar centered on delusional metaphors. Lacan's theory of paranoia enables us to clarify some significant features of fascism and, more generally, of totalitarianism.

Neoliberalism can be characterized as a new form of pseudo-democracy, or fascism, which is the exact opposite of ultranationalism. When it comes to neoliberalism, the delusional absolutization of national homogeneity is replaced with an equally delusional absolutization of social heterogeneity that is conducive to the dissolution of all political subjects. Hence the political polarization between neoliberalism and populism, which appears as a conservative reaction against the neoliberal grammar; the heavy emphasis on universal human rights, which are now understood as being the rights of a desubjectified and decontextualized human population; the technocratic turn of the neoliberal governance; the rise of legal global constitutionalism; and the paramount role that the new technocratic university plays in the postnational reordering of world politics.

After summarizing some of the ideas discussed previously and further expanding on the key concepts of infinite sets, life, and human dignity, all of which are relevant to the neoliberal reconfiguration of modern societies, the book closes with some considerations on the future of the European Union. The resurgence of nationalisms in Europe is likely to end in the breakup of the eurozone and the renegotiation of European treaties, but it remains to be seen whether the status quo ante can actually be restored. In light of the theory of political grammars, it seems more plausible to argue that a new type of grammar, tentatively defined as metanationalism, will finally arise from the clash between neoliberal Europeists and populist Euroskeptics.