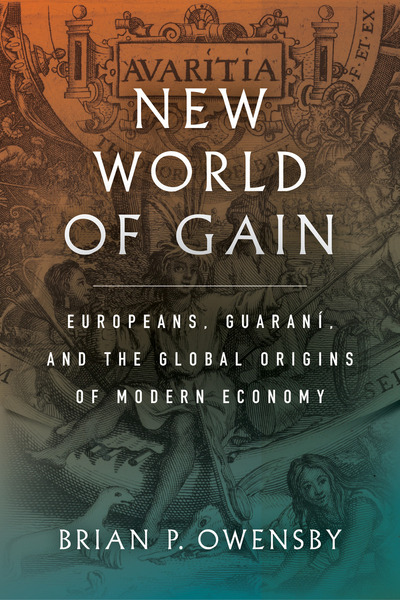 The introduction frames the argument of the book. It begins by introducing the encounter between Guaraní and Europeans in the early 16th century. It discusses the role of gain—the individual pursuit of material self-interest as a matter of course—in this epochal meeting. It then turns to a discussion of Karl Polanyi's "great transformation" as a conceptual background for the book, along with the idea of "moral economy." It concludes with a consideration of what it is to write about the Guaraní from within a Western understanding of historical time.

1 Coming to the Encounter
chapter abstract

Chapter 1 sets a baseline for Guaraní and European social understandings prior to their encounter in the sixteenth century. For the Guaraní, I draw on the vibrant anthropological and ethnohistorical literature of Amerindian peoples that has emerged in recent decades to ground robust ideas of gift, reciprocity, and conviviality. For Spaniards, I look to the centrality of "friendship" in social life and its concrete manifestation in gift-giving and reciprocal practices, even as these norms were beginning to be strained by the pull of transactional conduct and the individual pursuit of gain at the granular level of everyday life.

Chapter 2 narrates the meeting of Guaraní and Iberians against the backdrop of early material exchanges, the shock of Spaniards' instrumental and exploitative impulses, and Guaraní efforts to respond on their own terms. I consider how Guaraní women became central to settlers' concerns to advance personal agendas. The chapter notes that settlers' sense of gain became entangled with notions of personal liberty. Icontendthat this initial period of encounter opened the Guaraní and settlers to the perils and possibilities of a new world of gain.

Chapter 3 examines efforts within Spanish officialdom to mobilize royal justice toprotect Indigenous people from ongoing devastation. According to Spanish theology and law, human beings were ordained to life together, so that Spaniards and Guaraní should form part of a sharedsocialorder. And yet law and notions of love and conscience underlying it were already buckling under the weightof settlers' excesses.

Chapter 4 argues thatthislegalprojecthadfounderedby the early seventeenth century.Itsfailure ledmany among the Guaraní to cultivate a relationship with Jesuit missionaries seeking to convert them as a way ofescapingsettlers'unrelenting demands for Guaraní labor. The chapter looks to the exodus from the Guairá province as a symbolic moment of the founding of the mission world that structured the lives of most Guaraní through the next century and a half.

Chapter 5contendsthat the Guaraníentered intoa grand pact with the Spanish monarchy,brokered by Jesuit missionaries. Betweenthe mid-seventeenth and the early eighteenth centuries,thisalliancegave rise to the mission worldas a concrete manifestation ofGuaraní substantive mutuality and Jesuit notions of charity and the common goodto accomplish what the lawcould not: toinsulate the Guaraní from settlers and torebalance lives disrupted by unchecked gain. The chapter focuses on the ways mission life enabled Guaraní to preserve aspects of economic culture that had been challenged by settlers during the sixteenth century.

Chapter 6 chronicles two events that strained this pact: a settler rebellion in the 1730s and the Guaraní War of the 1750s, which resulted directly from the Spanish monarchy's growing concern with commerce as a tool of sovereignty and inter-imperial competition. The Comunero Revolt of the 1730s represented the boiling over of settler tensions regarding their denial of access to Guaraní labor in the missions. The Guaraní War of the 1750s represented the decision by the Guaraní of the thirty mission towns to stand as one against imperial pressures that placed broad notions of "good economy" and "reasons of state" above any concern for Guaraní communities.

7 From Community to Liberty
chapter abstract

Chapter 7 recounts the collapse of the mission world after expulsion of the Jesuits from Paraguay in 1767 and the introduction of reforms aiming to force mission residents into a competitive economy. Proposed reforms reflected Enlightenment debates over how to improve the economic prospects of the Spanish empire vis-à-vis English and French commercial competition. Reforms aiming to free the Guaraní from the "tyranny of the system of community" in favor of a new "system of liberty" were botched and created a kind of free-for-all of gain seeking that shattered the Guaraní-Jesuit mission world.

Chapter 8 considers European debates regarding an emergent market order, in which the mission world figured prominently as a point of moral reflection. The question was: could society hold together if men were allowed and encouraged to act chiefly from their own self-interest. Both sides of the dispute invoked the Paraguay mission world to make their points. Those who held out for the continuing broad relevance of moral regulation lost the argument. The victors, in securing their position, effectively erased any consideration of substantive mutuality from the world competitive gain-seeking in human affairs. In doing so, they also relegated the lives of Indigenous people to the margins of accounts of human history.

A concluding chapter amplifies and extends some of the book's key themes. It considers emergent Guaraní ideas of predationin relation to the Hobbesian story of social formation. It offers a series of propositions that relate the specificity of the three-century encounter between Guaraní and Europeans to the larger question of early modern economic globalization. It concludes with a reflection on the productive tension between Western and Guaraní understandings of historical time.