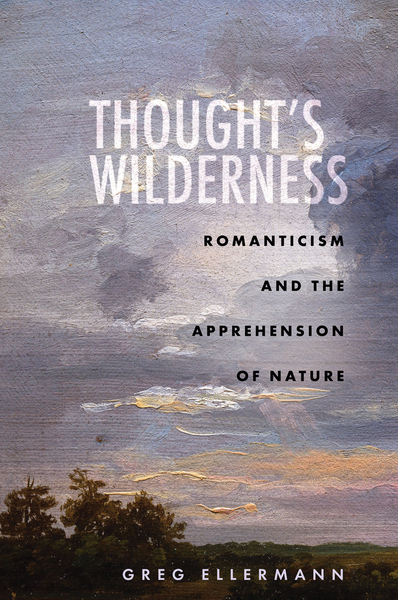 Thought’s Wilderness
Romanticism and the Apprehension of Nature
Greg Ellermann

This chapter examines the connections between romanticism and Marxist critical theory. Reading the canonical romantic criticism of Abrams, de Man, and Hartman alongside contemporaneous work by Horkheimer, Sohn-Rethel, and Adorno, it brings out the crucial, and often overlooked, political-economic dimension of those mid-twentieth-century narratives about romanticism that still inform literary studies. It proposes that the well-known scholarly debate about the apocalyptic imagination intersects with the critical theorists' investigation of capitalist abstraction and the domination of nature. Both the romanticists and the critical theorists rely on a notion of apprehensive consciousness. This chapter establishes the methodological coordinates for the book, outlining an interpretation of romanticism responsive to the reality of conceptual and economic abstraction.

This chapter treats Kant's concept of time in relation to his philosophy of nature. Famously, time as the "form of inner sense" is fundamental to the account of consciousness offered in the first and third Critiques. Reading the Critiques alongside Kant's works on natural history, this chapter attends to a planetary, or even cosmological, time irreducible to the forms of intuition. While Kant insists that philosophy inhabit "the human standpoint," he also recognizes a temporality that exceeds the bounds of inner sense: a natural-historical time that cannot be attributed to the transcendental subject. This "remaining time," which endures with or without finite things, recurs in Kant's reflections on natural history, and it unsettles stories about his inattention or hostility to wild nature.

3 Hegel in and Out of the Woods
chapter abstract

This chapter focuses on the environmental implications of Hegel's early thought. Often charged with being hostile to nature, Hegel's attitude is more complex: his concern is not with nature in itself but with the destruction enabled by an ideology of subjective freedom. In the essays and lectures of his Jena period, Hegel takes the measure of a nascent industrial capitalism, along with its consequences for life, consciousness, and labor. This chapter emphasizes the philosopher's resistance to the domination of nature. In a lecture course of 1803–4, he asks how machine labor reshapes consciousness. But he also proposes that machinery "deceives" nature, as it hastens on the "evaporation" of a bond between worker and world. If under capitalism all that is solid melts into air, for Hegel this change in the weather can be attributed to industry and its intensifying capacity for exploitation.

This chapter reads Wollstonecraft's Scandinavian Letters as a significant contribution to poetics. Throughout the Letters, she joins intricate figurative descriptions of the Scandinavian landscape with philosophical reveries on the origin and end of human life and language. Wollstonecraft's thinking about poetry pivots on the figure of anthropomorphism. Long seen as integral to the romantic lyric, anthropomorphism signifies the appropriative humanization of nature. In the Letters as well as the closely related essay "On Poetry," Wollstonecraft registers the damage wrought by anthropomorphism while reconceiving it as a memorial to violence. According to Wollstonecraft, this figure attests to the ruinous history of nature in "commerce"—her term for the circulation of raw materials, commodities, and human bodies. Her experiments in anthropomorphism present, with surprising specificity, "an image of human industry in the shape of destruction."

This chapter argues that in "There was a Boy" and related verses from The Prelude and elsewhere Wordsworth reconceives the apprehension of nature as an "accidental revelation." The phrase is De Quincey's, and it speaks to the inconsequentiality of experience central to Wordsworth's poetry. Neither sublime nor traumatic, accidental revelation concerns nature as it simply appears, or reveals itself, in all its ordinariness—which is not to say in its "fittedness" to the human mind. Rather, by redirecting or suspending its own apprehensive power, Wordsworth's poetry feels its way toward a familiar though genuinely nonhuman nature. What Wordsworth calls the "gentle shock of mild surprize"—a feeling as inconsequential as potentially destabilizing—is the feeling of nature in its difference from, or nonidentity to, consciousness. In this gentlest of shock experiences, nature appears, and consciousness finds itself free from the compulsion to grasp.

This chapter concerns metaphor in Shelley's Queen Mab, and it aligns the poem's figures of spirit with the ethereal atmospheres of natural philosophy. For Shelley, ether is an ideal for poetic thinking. Irreducible to either spirit or matter, ether suspends the distinction between them. It gave Shelley new ways of thinking about the relationship between spirit, or consciousness, and material nature. This chapter demonstrates that Shelley's thought is inseparable from the form in which it takes place, and it identifies those complex metaphoric transformations so characteristic of his style as ethereal. It also suggests that Shelley's ethereal poetics expresses a hope for reconciliation with nature. The chapter concludes by turning to Prometheus Unbound, where Shelley invokes "common love" as another way of relating to the world.