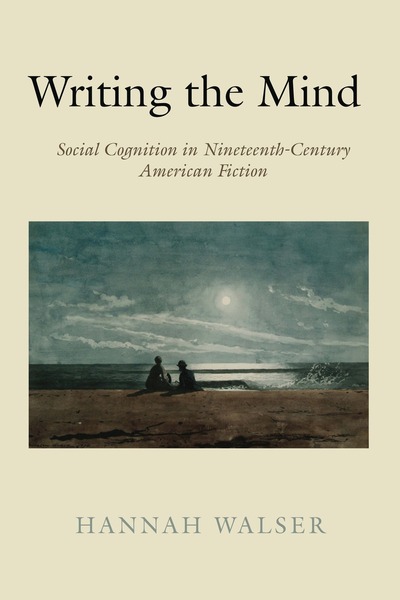 This book argues that many familiar texts of nineteenth-century US literature are best understood as experiments in social cognition. Whereas scholars of cognition have often depicted human reasoning about other minds as confined to "Theory of Mind" (ToM)—the attribution of propositional mental states—this introduction draws upon contemporary work in philosophy of mind and anthropology, as well as context from the history of psychiatry, to reveal the malleable and multifarious methods that individuals and cultures use to make sense of behavior. Literary works can thus actively reshape readers' paradigms for explaining their own and others' actions. By representing minds that are neither transparent to themselves nor legible to others, and characters who behave in a way inconsistent with mental-state explanations, the texts in this study probe the limits of typical Theory of Mind and offer an ad hoc patchwork of alternative paradigms.

This chapter traces the troubled fate of a particular cognitive metaphor—the mind as a container for textual mental states—in American literary history. The novels that Charles Brockden Brown wrote in 1798–99 obsessively return to a curious scenario: a chest or box is supposed to hold important papers—usually letters or diaries—but either turns out to hold nothing or is destroyed before its contents can be accessed. Appearing in moments of what I call cognitive emergency, these scenes expose the distinctive frailties of the "mind as container for texts" metaphor: vulnerability to invasion, inability to distinguish between genuine and "forged" or externally induced mental states, and paranoid obsession with tracing behavior to its source. The trope recurs over the course of the nineteenth century in texts as diverse as Poe's Narrative of Arthur Gordon Pym, Douglass's Narrative of the Life, James's The American, and Chesnutt's "Baxter's Procrustes."

Through readings of Poe's Dupin trilogy and Melville's "Bartleby," this chapter develops the concept of a pragmatics of behavior, highlighting the way that formal and narratological choices steer a reader's ad hoc epistemic stance in real time. By focalizing these texts through narrators who shift from one psychological model to another under pressure from a seemingly inexplicable series of actions (whether human or, in the case of Poe's "The Murders in the Rue Morgue," of ambiguous origin), Poe and Melville not only define a spectrum of epistemic stances toward the propositional contents of other minds, but also indicate the utilitarian goals of enforcing laws, managing subordinates, and maintaining a good-enough social harmony that inform even the most abstract theories of will and psychological interiority. As tightly controlled as philosophical thought experiments, these fictions delineate the conditions under which behaviorist explanations and predictions are more successful than intentionalist ones.

This chapter examines textual representations of slavery—both nonfictional accounts like Douglass's autobiographies and the interviews with formerly enslaved people conducted by the Works Progress Administration, and fictions like Delany's Blake, Stowe's Dred, and Chesnutt's conjure tales—that figure the plantation as the site of a mindreading arms race. On the one hand, the contradictions folded into the white supremacist cognitive model led whites into erratic behavior patterns that placed considerable strain on enslaved people's efforts to predict and manage the actions of their oppressors. On the other hand, the ever-evolving white supremacist model acted as a framework within which and against which enslaved people developed an understanding of the causal power of their own mental states. This chapter reads scenes of Black minds reasoning about white minds as interventions in the project of diagnosing and resisting the sociocognitive scripts of white supremacy.

This chapter uses two works by Mark Twain to define "fooling," a form of nonmentalistic deception. Twain's characters deceive, not by communicating deliberately false information to their victims, but by creating scenes filled with material clues designed to activate a misleading behavioral schema. Because it does not rely on social trust, fooling is especially well suited to deception across a power or status differential. The capacity of fooling to ameliorate what the philosopher Miranda Fricker calls "epistemic injustice" makes it a recurring motif in both fictional and nonfictional texts. In particular, fooling appears as a subterranean force in two important social spaces in the antebellum United States: the slave auction and the asylum. The closing pages continue to explore the cognitive impact of Gilded Age inequality by examining the gendered and national reasons for what Henry James represents as the inverse correlation between wealth and mindreading capacity.