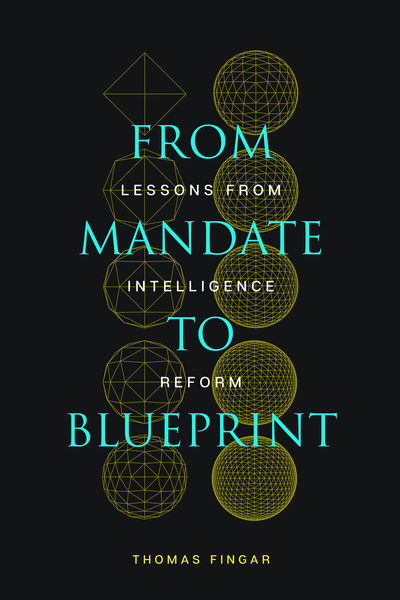 From Mandate to Blueprint
Lessons from Intelligence Reform
Thomas Fingar

From Mandate to Blueprint

EVERY NEWLY APPOINTED GOVERNMENT OFFICIAL enters office with excitement, trepidation, and a mandate to achieve prescribed and personal objectives. For some, the appointment is a long-desired opportunity to apply the lessons of experience and academic study. For others it is a welcome but somewhat unanticipated reward for political activism or loyal service on the Hill or in an electoral campaign. A third type of appointee reaches the new position after years of service and demonstrated achievement in lower-level bureaucratic assignments. No matter how they ascended to the new position, their excitement and self-confidence are soon confronted by the need to address two critical questions: “What am I supposed to do, and What is the best way to achieve those objectives?”

The content and character of these questions are shaped if not determined by the mission and responsibilities of the position, its political profile, promises made during the electoral campaign, and the priorities of the administration and higher-level officials. But regardless of the specific parameters, every new appointee must quickly decide what he or she wishes to achieve, what can or must be done, how to prioritize and sequence interconnected objectives, and how to structure and staff arrangements to achieve organizational and personal objectives. Appointment to the new position is an opportunity, but it is also a challenge. It sometimes—or to some degree—carries with it a mandate subsuming specified requirements and authorities, but it virtually never comes with a blueprint detailing the steps that must be taken to enhance performance, perform new missions, minimize disruption of continuing missions, overcome bureaucratic resistance, or manage the expectations and involvement of oversight bodies.

The situation confronting every new appointee is unique, and there is and can be no “one-size-fits-all” prescription or checklist for making the transition from mandate to blueprint. But there are important commonalities that shape and constrain possibilities and prospects for success. I was aware, albeit often only dimly, of some of the factors that would facilitate, complicate, or impede my ability to define and perform the missions of the Office of the Director of National Intelligence for Analysis when I accepted the position of Deputy Director of National Intelligence for Analysis. For the most part, I was navigating without a map and with imperfect understanding of how the numerous component tasks subsumed by my mandate to reform intelligence analysis did or should fit together. Part I of this book describes how I thought about, defined, and linked specific subtasks to achieve overarching objectives. Although I did not have a master plan or conscious strategy, discussions with my senior team, feedback and lessons learned in the course of implementation, and discovery of new problems and opportunities that became apparent only when our ideas were tested in real-world application provided enhanced retrospective understanding of how component factors did and should fit together. This introduction will frame the specific decisions and developments described in Part I and identify broad questions and challenges the guidance in Part II is intended to address.

All appointments come with a mix of specified and assumed tasks, responsibilities, and opportunities. Sometimes they are spelled out clearly in legislation, executive orders, or campaign promises, but such enumerated goals are always and inextricably linked to ongoing missions and responsibilities. It is almost never possible to stand down an agency or bureaucratic element while devising, implementing, and perfecting desired reforms. Old missions must continue unless and until they are explicitly terminated or transferred elsewhere. Stated more simply, attempts to make improvements cannot jeopardize performance of ongoing missions. Some, perhaps many, of the continuing responsibilities will be as or more important, at least to some customers and constituencies, than the new agenda items a new leader is expected to undertake. This means that one of the first jobs of any new appointee is to determine which prescribed and suggested tasks are mandatory (must dos), which ones are possible and/or expected but are not formally mandated (desirable), and which ongoing tasks are critical to mission performance (essential).

Clarification and categorization of tasks and responsibilities is a necessary prerequisite for prioritization. Some tasks are more important, more urgent, or more foundational than others. Some tasks will be easier to achieve than others and might be placed near the top of the agenda in order to build experience, confidence, and momentum. Others will be judged more difficult to achieve and to entail greater risk of failure or diversion of resources needed to achieve other goals. Most organizations have a bias for continuity and reluctance to undertake new missions, but many contain individuals or components with strong ideas about what can or must be done to meet the requirements of key customers. There is no magic formula or algorithm for prioritizing constituent and interconnected tasks, but failure to prioritize is almost certain to preclude focus, concentration of effort, and ability to get things done. Stated differently, specification and prioritization of tasks is essential for development of strategies and plans to achieve them.

Defining and prioritizing objectives and responsibilities must both precede and be accompanied by determination of what is necessary to achieve them. Do the requisite conditions (for example, staff, information, authorities, funding) exist or must they be obtained? Will acquisition of foundational conditions be easy or quick to achieve, or will expected delays jeopardize undertakings with high priority and political salience? Are specific mandated or other high-priority goals sufficiently important to the President, key Members of Congress, or influential constituencies that they will help to overcome identified impediments? Should you push ahead even if you doubt your ability to achieve goals important to others (or to you) and hope for the best, or should you advise key players early on that favored or priority objectives are at risk? Posing and exploring such questions are both derivatives of and integral to the prioritization of mandates and mission objectives.

Next-step considerations must address such derivative and enabling tasks. For example, if some tasks require skills that are not currently available, it is desirable if not essential to identify and recruit people with the necessary skills and experience. If building the capacity needed to achieve enabling and/or priority goals requires restructuring the existing organization and reassigning personnel, doing either requires steps to protect or deemphasize legacy activities. This, of course, requires investigation and judgments about the relative importance of multiple responsibilities to the overall missions of the organization, national security, economic performance, and so on, and to powerful political actors

Inventory and Use Personal and Political Capital

Appointment to a position bestows a certain amount of authority and ability to command attention and consideration of proposals, but it does not ensure success. “Do it because I’m the boss” is seldom an effective way to secure buy-in. To maximize the likelihood of compliance and cooperation it is prudent to identify and exploit all the leverage you can marshal. Obtaining clarity about legal imperatives and constraints, the intentions and expectations of key players in the executive and legislative branches, and the limits and possibilities of authorities delegated to the position is important for the design of any blueprint. So too is awareness of the strengths (and limitations) of your own reputation and those of your senior staff. Winning benefit of the doubt is often critical to securing at least tentative support for innovative steps. Obtaining buy-in can be easier if key constituencies and individuals judge that you—and therefore your proposals—are worthy of respect.

Bureaucratic organizations generally welcome the arrival of new officials and the opportunity to revitalize existing structures, procedures, and priorities. But they are also skeptical of arrivistas presumed to lack in-depth understanding of agency missions, routines, and capabilities. Career bureaucrats can be a rich source of information and support for goals they embrace. But they can also be a formidable obstacle to changes they deem inimical to agency mission or individual career prospects. Striking the right balance between utilization of all that experienced bureaucrats can contribute and willingness (and ability) to lead them out of their comfort zones is an early and unavoidable challenge. For both obvious and nonobvious reasons winning their acquiescence if not heartfelt support can be critical to achieving instrumental and overarching objectives. They want their organization to succeed and, for that reason, most will want the new leader to succeed. The challenge is to align their definition of success with that of the new leader.

Winning cooperation and staving off criticism from opponents and people who support what you are trying to do but believe they could do better requires finding an acceptable balance between transparency (telling others what you intend to do, why you are doing it, and how you plan to achieve enunciated goals) and flexibility (willingness to make course corrections in response to feedback). Members of the senior team, subordinates, superiors, members of oversight bodies, the media, and other constituencies have an interest and a stake in the organization’s performance. The more one telegraphs intentions and intended actions, the greater the likelihood of criticism and complaint before efficacy can be determined and the harder it is to make adjustments. Conversely, the more that specific intentions are withheld, the greater the likelihood of misunderstanding or judgments that the leader has a hidden agenda or lacks a clear plan.

Perceptions are often as important as performance. Having observers judge that one knows what he or she is doing is as or even more important than actually having a detailed blueprint for achieving announced goals. Helping constituencies to understand what one is trying to do and reporting often on progress and problems can build support and buy time. Knowing what to report and when to report it, and describing actions in ways that demonstrate flexibility and response to feedback without conveying an image of irresolution and lack of a strategy, require both forethought and continuous reassessment. They also require judgments about how long to stick with innovative actions in expectation that they will work eventually and when to admit failure and try something different.

Blueprints need not—and often cannot—be fully fleshed out before one begins efforts to secure buy-in and implement key elements. Indeed, large parts can be more visionary than detailed. But the vision must be clear, easy to explain, and truly reflective of what the new appointee plans to do. Feedback and flexibility are invaluable for judgments about what to continue for at least a bit longer and what to modify or jettison right away. We captured this with a bumper-sticker-size motto that was also our modus operandi: “Think Big, Start Small, Fail Cheap, Fix Fast.”