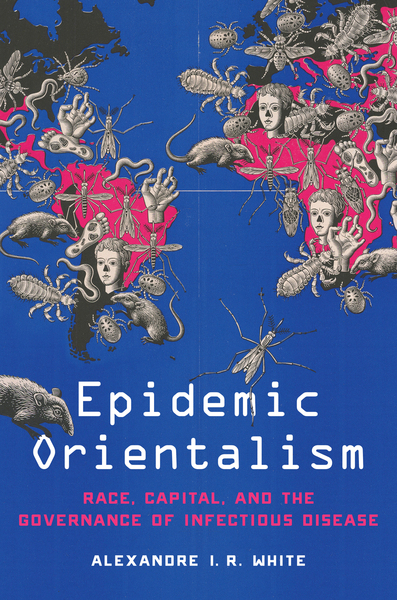 What ideas and practices organize the world of international infectious disease control? Why do we prioritize responses to certain epidemic events and not others? This introduction provides an overview of the book while also introducing the key theoretical contributions of the work. In this chapter the author introduces the reader to the concept of epidemic Orientalism, a persistent discursive framework in international infectious disease response that in no small part organizes how epidemics are understood and responded to at a global scale.

Chapter 1 explores how a globally constituted infectious disease control system could emerge in the nineteenth century by looking backward in time. How could epidemic diseases come to be a subject of regulation, let alone one of international collaboration, in a time when the very concept was in its nascence? This chapter charts the processes through which the first systems for internationally regulated infectious disease control were formed by examining the factors that led to the first International Sanitary Conferences to the instantiations of the major International Sanitary Conventions in the 1890s through the early twentieth century.

2 The International Sanitary Conventions at a Colonial Scale
chapter abstract

Chapter 2 explores how central to the operation of these systems was the export of traditional forms of sanitary controls away from European ports to colonial points of departure, prompting massive disease and sanitary monitoring systems in colonial spaces. This chapter shows how these regulations proliferated specific responses to the diseases covered in the International Sanitary Conventions. These colonial systems of disease control in turn reproduced and exacerbated existing Orientalist anxieties around race and facilitated novel repressive forms of population management to prevent economic isolation from Europe.

3 Epidemics under the WHO
chapter abstract

Chapter 4 examines the most recent process of revision of the International Health Regulations. Prior to 1995, the IHR had focused primarily on plague, yellow fever, and cholera. The revisions of the IHR, beginning in 1995 and ending with the formation of the 2005 IHR, drastically transformed global responses to infectious disease outbreaks. In shifting its focus from three diseases capable of international spread to any emergent or reemerging disease capable of presenting an international threat to trade and traffic, the WHO and the World Health Assembly thus produced massive demand for disease surveillance and control. This chapter argues that significant challenges to the authority of the WHO in the latter half of the twentieth century and the emergence of new global health actors in the early 1990s provoked a need within the WHO to reestablish its dominance in the emergent field of global disease control.

Chapter 5 explores how the risk of epidemic outbreak is determined and which threats trigger international responses, through an analysis of the determination process of the World Health Organization's highest disease threat level, Public Health Emergency of International Concern. The designation mandates that the WHO and its member nations commit resources and impose extraordinary measures to combat the disease threat. Through interviews with health experts involved in the PHEIC assessment process, this chapter explains why certain diseases receive more attention from global health actors. In also examining the effects of the COVID-19 response of the WHO on its authority, this chapter analyzes the effects of most of the PHEICs designated overall.

Chapter 6 examines how epidemic threat is read through novel financial products produced by the World Bank. On May 21, 2016, the World Bank announced the development of the first-ever Pandemic Emergency Financing Facility to prevent the worst humanitarian and economic effects of epidemic emergencies. The head of derivatives and structured finance for the World Bank's Capital Markets Department, Michael Bennett, stated via Reuters that "if the pandemic emergency financing facility (PEF) had existed in 2014, some $100 million could have been mobilized as early as July." However, when faced with the 2018–2019 Ebola epidemic in the Democratic Republic of Congo, the largest set of funds, the potential $425 million, contributed nothing to the effort to control the spread of the disease. How does the largest funded epidemic response facility in the world, designed in the shadow of one Ebola epidemic, fail to pay out for another?

The book ends with a recognition of the way in which durable historical discourses continue to shape and condition our present and of the possibilities for our health responses, while also offering areas for further research.