STANFORD
UNIVERSITY PRESS
How to Live at the End of the World
Theory, Art, and Politics for the Anthropocene
Travis Holloway 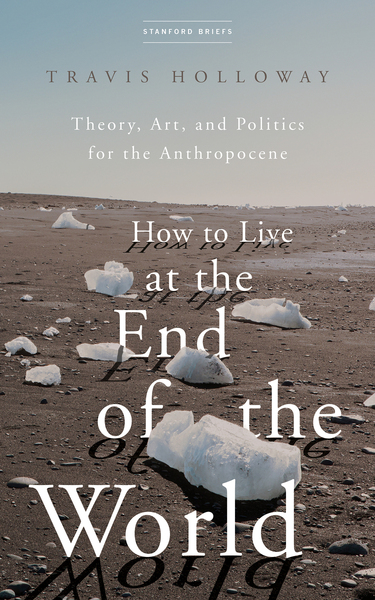 How to Live at the End of the World
Theory, Art, and Politics for the Anthropocene
Travis Holloway

A new geological epoch, an Anthropocene, collectivizes, politicizes, and historicizes human beings after the so-called "end of history" and folds this history into geological time. The author proposes a counterhistory for human beings in the Anthropocene that begins with a different way of life and thought, a philosophy for the end of the world. A philosophy for the end of the world would include a responsibility to narrate the end of the Holocene and the birth of the Anthropocene; a call to "begin the end of the world," as Aimé Césaire wrote; a history after "the end of history"; a politics after neoliberalism's worldlessness; and a posthuman condition where forms of life that were previously thought to be "worldless," as Heidegger or Arendt put it, could appear in public space. The introduction outlines the three chapters of the book on history, art, and politics.

This chapter proposes a counterhistory for human beings for the Anthropocene. One reason for reclaiming and retelling the supposed grand narrative of our time, the birth of the so-called Anthropocene, is to correct the story of the Anthropocene. Another reason is to consider this type of narrative – a geologic epic – and to engage with the question of how we should tell it. I retell this story with tools from philosophy's counterpart to geological dating, the genealogical method, which reperiodizes history in terms of power and resistance. Using these tools, I critique a universalizing, colonialist account of the Anthropocene that Kathyrn Yusoff has called "White Geology," and offer a contrasting historical narrative, a counterhistory, for human beings in the Anthropocene.

2 Art: The Transition from Postmodern Art to the Anthropocene
chapter abstract

This chapters outlines some emerging traits of art in the Anthropocene. I begin by examining a contemporary play – a metafiction about the reinvention of epic– in which human survival depends on the weather. I turn to contemporary artists like Anne Washburn, Sarah Anne Johnson, Octavio Abúndez, and others to outline five aesthetic practices that mark a new approach to art in the Anthropocene and an art beyond postmodern art. I focus specifically on contemporary works of art that deal with strange or violent weather, and I conclude by discussing different ways of looking at clouds in Aristophanes, Plato, Kant, Hölderlin, Heidegger, and others.

3 Politics: Democracy at the End of the World
chapter abstract

This chapter proposes a radical form of democracy on the part of humans that would have to be won, then reconceived as a zoocracy, a rule or assembly of all of the living. I argue that this form of politics will have to contest and resist emerging ethnic notions of a "people" at the end of the world. At the same time, it needs to respond to neoliberalism's worldlessness with a form of democracy that was described by Plato as "oligarchy's enemy." A new sense of history and collectivity in the Anthropocene hastens an exit from neoliberal life that might not have been thinkable or achievable before. We must direct this new sense of collectivity and history towards a radical form of democracy, and reconceive public space as a space where humans and nonhumans can appear alongside one another.