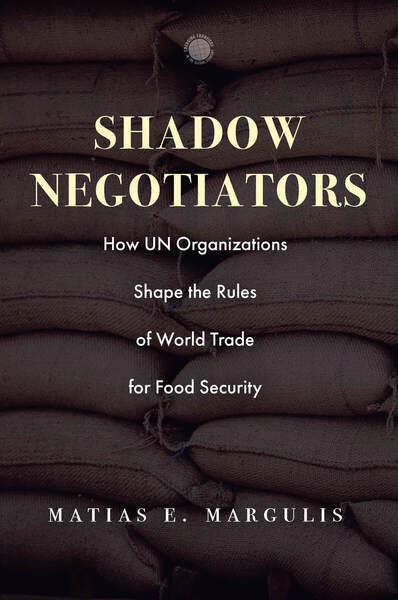 This chapter introduces the main argument of the book, its contribution to scholarship, and the scope of the study. I argue that United Nations organizations have intervened in multilateral trade negotiations at the General Agreement on Tariffs and Trade (GATT)/World Trade Organization (WTO) in an effort to alter proposed trade rules that those organizations expected would have negative implications for world food security and vulnerable populations. I situate the book within existing scholarship and outline its contribution to debates about global trade politics and law, the UN's role in global economic governance, and theories of regime complexes and international organizations (IOs) as actors. The chapter finishes with a description of each chapter in the book.

This chapter develops the concept of intervention by IOs and situates the book's contribution to the study of regime complexes and theories of IOs as actors. I provide an expanded definition of IO intervention and specify the conditions under which IOs are most likely to intervene at an overlapping organization. I explain each of the four intervention strategies (mobilizing states, public shaming, invoking alternative legal frameworks, and taking sides) that are subsequently analyzed in the empirical chapters. I detail how the impacts of intervention by IOs are evaluated in this study by assessing their influence on the discourse, agenda, and outcomes of decision-making at the targeted IO.

This chapter charts the evolution of the global governance of food security from an international regime to a regime complex. It explains how the creation of the WTO in 1995 to replace the GATT was pivotal in transforming the global governance of food security by bringing agriculture and food under the authority of the trade regime. The chapter provides the context for understanding how institutional proliferation and diverging goals among IOs involved in the regime complex for food security have spurred UN actors to intervene in trade negotiations at the GATT/WTO.

The first chapter shows evidence of intervention by the Food and Agriculture Organization (FAO) in the GATT Uruguay Round (1986–94) and the WTO Doha Round (2001–8). I demonstrate that FAO officials sought to insert themselves into the politics of the agriculture negotiations by using the strategy of mobilizing GATT/WTO member states. In the Uruguay Round, the FAO chose to intervene out of concern that proposed global trade rules would increase global food prices and thus make food less affordable and less accessible for the world's poorest people. The FAO exerted influence over the outcome of the Uruguay Round, as the chief architect of an agreement to safeguard food security.

This chapter examines how the World Food Programme (WFP) used public shaming of WTO members. Political conflict over international food aid reached fever pitch during the WTO Doha Round, when states sought to establish new rules that would ban certain types of food aid. WFP officials were alarmed by the proposed WTO rules, which they predicted would cause a precipitous decline in the supply of international food aid and thereby increase the number of hunger-related deaths. Unable to persuade trade negotiators to change the proposed rules through face-to-face dialogue, the WFP chose to publicly shame WTO members by launching a media campaign that depicted trade negotiators as recklessly endangering the lives of starving people. The WFP's intervention was controversial and elicited significant backlash from states, yet proved successful in pressuring trade negotiators to change course and drop the proposed food aid ban.

5 The OHCHR: Invoking Human Rights at the WTO
chapter abstract

This chapter analyzes how the Office of the High Commissioner for Human Rights (OHCHR) invoked international human rights law in an effort to alter global trade rulemaking in the WTO Doha Round. OHCHR officials were concerned that WTO rules were inadequate to protect the human rights of vulnerable populations from the potential adverse effects of agricultural trade liberalization. Although WTO members preferred to keep discussions of human rights out of the negotiations, the OHCHR sought to steer global trade rules toward greater alignment with international human rights standards. In doing so, the OHCHR took extraordinary and unconventional political action, including making unsolicited proposals directly to trade ministers and creating uncertainty about the consistency of WTO rules with international human rights law. I show that the OHCHR's intervention contributed to the creation of new draft WTO rules to protect food security, incorporating safeguards for vulnerable groups.

6 The UN Special Rapporteur on the Right to Food: "Food Security Hostage to Trade"
chapter abstract

The final empirical chapter examines intervention by the UN Special Rapporteur on the Right to Food (SRRTF) in the WTO agriculture negotiations. It shows that the SRRTF intervened by taking sides and endorsing the bargaining position of a group of WTO members demanding greater flexibility in global trade rules to pursue domestic food security goals. The SRRTF chose to intervene in the WTO agriculture negotiations out of a conviction that major reform of global trade rules was necessary to combat rising food insecurity caused by a succession of global food crises. While the SRRTF's interventions prompted significant backlash from powerful states, they were nevertheless influential in shaping the agenda and outcome of negotiations. Most notably, the SRRTF's advocacy for a legal waiver to protect developing countries' public food-stockholding programs from legal challenge served as the blueprint for a new WTO agreement.

This chapter summarizes the book's findings and assesses the influence of UN actors on global trade rulemaking. I show that interventions by UN actors had a demonstrable impact on discourse, agenda setting, and outcomes at the GATT/WTO, helping to steer international trade rules toward outcomes intended to protect world food security. When successful, intervention may ameliorate "trade-and" conflicts by introducing other important international objectives, such as food security and human rights, into the trade regime. This book contributes to our understanding of who makes the rules of global trade by revealing the previously unrecognized role of UN organizations in GATT/WTO negotiations. The cases also provide the basis for developing more generalizable insights about the phenomenon of intervention by showing that IOs are exercising influence over decision-making beyond the boundaries of their own institutions and at other overlapping institutions over which they have no formal control.