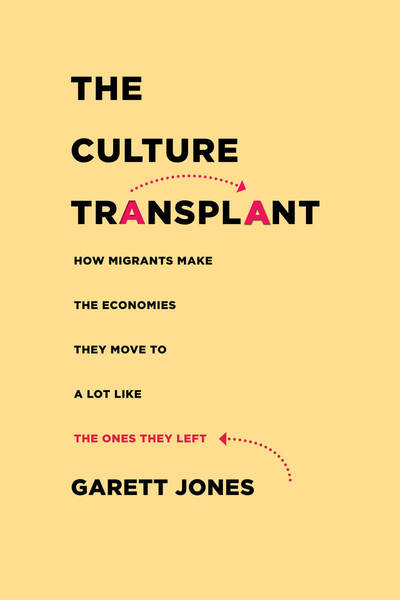 For the average country, what would be the best simple immigration policy? One reasonable option: "Let in people from China, and encourage them to stay a long time." In countries with large numbers of immigrants from China, the descendants of Chinese immigrants tend to be prosperous, and in countries whose populations are mostly descendants of Chinese immigrants, governments tend to be market friendly and prosperity is relatively widely shared. This simple story illustrates the message at the heart of this book: the migrants bring cultural traits to their new homelands, and those new cultural traits persist for decades, even centuries. Migration creates a Culture Transplant.

Introduction: How Economists Learned the Power of Culture
chapter abstract

Powerful computers were the engine that powered economists' interest in culture. In the 1990s, cheap statistical software and big cross-country datasets made it possible to test many informal theories that social scientists had for explaining why some countries were so much richer than others. A repeated finding was that cultural factors kept turning up as statistically robust predictors of good long-run economic performance—and as one might suspect from the preface, "percent Confucian in a country" was one of those robust predictors. Correlation isn't causation, but these repeated correlations spurred economists to look harder at cultural explanations for why some nations were so rich and some were so poor.

A prosperous, market-friendly nation, one of the world's richest, embarks on a plan of mass immigration. The new migrants, according to mainstream academic scholarship, bring new ideas about socialism, and within a generation or so the nation becomes mired in economic mediocrity. This is the story of Argentina from the late 1800s onward, and it's a case study that illustrates a general trend. That trend has been repeatedly documented in recent economic research: that second-, third-, and fourth-generation descendants of immigrants often tend to hold social, political, and economic attitudes much like those in their ancestors' country of origin. Second- and third-generation Italian-Americans are in many ways much like Italians in Italy, German-Americans much like Germans in Germany, and so on.

The previous chapter looks across a few decades, a century at most. But do migrants who arrived centuries ago still shape nations today? The answer is obviously yes in the case of the U.S. and Canada, where violent invasions by Europeans increased the economic influence of the invaders' culture. But in the early 2000s, two Brown University economists asked that question more systematically and found strong evidence that a region's past economic success and social complexity strongly predicted current economic success—but only when one adjusted for migration.

While the Brown University researchers kicked off this vast empirical literature showing that ancestral economic success strongly predicted and possibly strongly caused future economic success, they weren't the only researchers to uncover important findings in what is now called the Persistence or Deep Roots literature. Another influential paper showed that ancestral experience with cutting-edge technology, especially in the year 1500, was a strong predictor of modern prosperity, even stronger than the measures the Brown economists had created. And once again, the relationship between past and present success was vastly stronger once one adjusted for migration, once one noticed that peoples may well matter more than places.

It's clear that migrants shape a nation's economic future, but why? This chapter looks at whether nations with large numbers of migrants from countries with long histories of social complexity and economic success tend to be market friendly and low corruption as well. The answer is clear: yes. The strongest single ancestral predictor of good contemporary governance is the ancestral technological experience measure discussed in chapter 3. The traits that shape good government appear to migrate; the Culture Transplant appears to shape government.

When it comes to creating widely shared peace and prosperity, is ethnic diversity a strength, a weakness, or something of both? This chapter begins by looking at small-scale interactions—workers in the same firm, in particular—to address this important question. A repeated theme in recent scholarly business research into diversity in the workplace is that diversity is a "double-edged sword," a phrase that, at least in this context, has yet to spread to the broader intellectual culture. It's widely accepted that ethnic conflict can be an important source of social conflict more generally, and this chapter reviews some of the complicated cross-country evidence on this question, but the evidence from small-scale interactions provides the clearest answers on this question that will be so important in the twenty-first and twenty-second centuries.

6 The I-7
chapter abstract

Most of the world's innovation occurs in just seven countries, the I-7: South Korea, Japan, China, the UK, France, Germany, and the U.S. Further, innovation—whether measured by patents, research spending, or academic articles—appears to be sensitive to government institutional quality. Together, that means that if poorly chosen migration policies were to hurt institutional quality in the I-7 even slightly, the future well-being of humans worldwide would be placed at risk. The entire world has an interest in ensuring that institutional quality of the I-7 does not decline.

The relatively peaceful migrations of Chinese immigrants to countries across Southeast Asia offer a chance to informally test the culture transplant theory of economic performance. And since countries with a greater percentage of ethnically Chinese citizens tend to have more prosperous economies and more market-friendly, lower-corruption governance, the culture transplant theory passes this test quite successfully.

8 The Deep Roots across the Fifty United States
chapter abstract

Economists have checked to see if the Culture Transplant theory holds up across the fifty United States. One paper, coauthored by a scholar at the strongly pro-immigration Cato Institute, finds results that generally if incompletely support the view that the experiences of the ancestors of today's citizens are important drivers of today's prosperity. Another more detailed study, focused on the economic performance of counties rather than states, presents even stronger evidence for the culture transplant theory.

For decades, medical researchers knew that aspirin tended to reduce fever and headaches. However, while doctors were glad to prescribe aspirin because they knew it worked, they did not know why it worked. Indeed, it was only in 1971 that John Vane won the Nobel for his research into aspirin's mechanism of action, which finally moved us from "We know aspirin works" to "We know why aspirin works." When it comes to culture transplant theory, we are in the pre-Vane era: we know migration shapes economic and social outcomes, but we do not yet, with any degree of certainty, know why. The culture transplant's mechanism of action is an important topic for future research.

10 Conclusion: The Goose and the Golden Eggs
chapter abstract