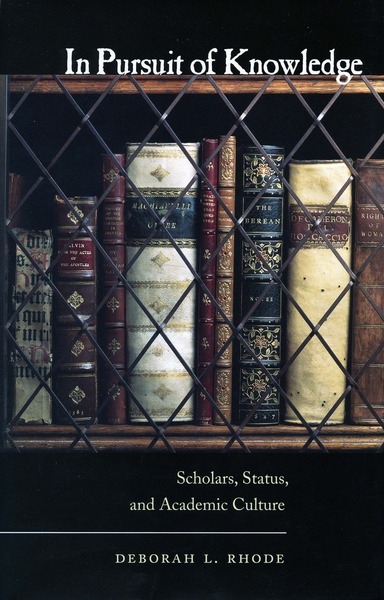 Although academics have never lacked for critics, publications on the profession tend to be either popularized polemics, which are engaging but misleading, or scholarly analyses, which are intellectually responsible but of little interest to anyone but specialists. In Pursuit of Knowledge offers an alternative: a unique portrait of academic life that should appeal to both experts and a general audience.

Drawing on a wide range of disciplines, including higher education, history, law, sociology, economics, and literature, the book focuses on the ways in which the pursuit of status has undermined the pursuit of knowledge. Deborah Rhode argues that both individual scholars and institutions in higher education are caught in an arms race of reputation. The result has been to skew priorities in scholarship, erode commitments to teaching, compromise efforts of public intellectuals, and impede effectiveness in administration.

The book offers several solutions to counter these pervasive problems in our research institutions. Rhode makes a case for increasing accountability and realigning reward systems. She argues that what is needed is a greater sense of responsibility among universities and their faculties to narrow the gap between academic ideals and practices.

In Pursuit of Knowledge is meticulously researched and elegantly written. It is also exceptionally entertaining in its use of quotations culled from over a hundred academic novels, including works by Kingsley Amis, Saul Bellow, David Lodge, and C.P. Snow.(For example, from P.G. Wodehouse's The Girl in Blue, "The Agee womantold us for three quarters of an hourhow she came to write her beastly book, when a simple apology was all that was required.") The result is a highly readable but also deeply reflective analysis of the academic profession.

Deborah L. Rhode is Ernest W. McFarland Professor of Law, and Director of the Keck Center on Legal Ethics and the Legal Profession at the Stanford Law School. She has written and edited fifteen previous books, including Pro Bono in Principle and in Practice: Public Service and the Professions (Stanford University Press, 2005).

"Rhode has written a spirited book on what students and parents are—and aren't—getting for their investments in higher education. In her view, it isn't very much."

"Rhode approaches a familiar subject in unusual and creative ways, artfully synthesizing vast materials from different fields and sources. Her sober ethical argument is sure to stimulate debate among scholars and professional leaders in higher education."

"Among the spate of recent accounts of the state of American higher education, In Pursuit of Knowledge stands out. It's an insider's dissection of university life, written with crispness and clarity. This nicely balanced, but never namby-pamby, account eschews ideology for critical analysis. It makes essential reading for anyone seeking a fresh perspective on such contentious questions as the caliber of college teaching, the uses and abuses of academic freedom, and the capacity of today's academic managers to lead their institutions effectively."

"Although no dearth of accountability edicts exists at this moment in the history of higher education, Deborah L. Rhode's In Pursuit of Knowledge offers another, this one an insider perspective that joins current and contentious public debates questioning the twenty-first-century university's very raison d'etre. This vexed topic is enlivened by Rhode's heavily documented and widely ranging perusal...suggesting the expansive scope of the book."