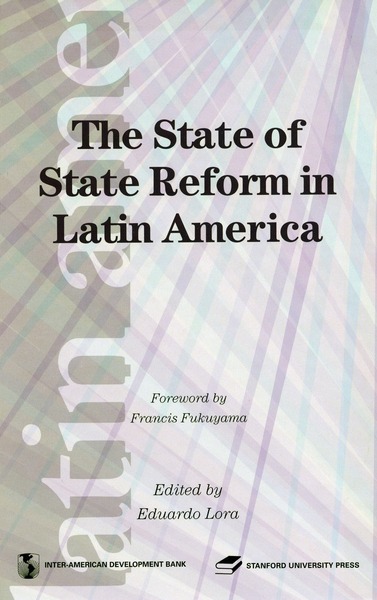 Latin America suffered a profound state crisis in the 1980s, which prompted not only the wave of macroeconomic and deregulation reforms known as the Washington Consensus, but also a wide variety of institutional or 'second generation' reforms. The State of State Reform in Latin America reviews and assesses the outcomes of these less studied institutional reforms.

This book examines four major areas of institutional reform: a) political institutions and the state organization; b) fiscal institutions, such as budget, tax and decentralization institutions; c) public institutions in charge of sectoral economic policies (financial, industrial, and infrastructure); and d) social sector institutions (pensions, social protection, and education). In each of these areas, the authors summarize the reform objectives, describe and measure their scope, assess the main outcomes, and identify the obstacles for implementation, especially those of an institutional nature.

Eduardo Lora is Principal Advisor of the Research Department of the Inter-American Development Bank. He is also coeditor of Is Geography Destiny?: Lessons from Latin America (Stanford University Press, 2003).

"A valuable addition to Latin American economics and politics collections."

"Reaching the conclusion that the problems of underdevelopment are largely due to poorly functioning public institutions has become as popular as prescribing 'institution building' as a cure for poverty. Unfortunately, the popularity of these conclusions has tended to yield more banal observations than practical approaches; more empty speeches than clear ideas, denunciations rather than solutions. This book is a welcome departure from this trend. The State of State Reform is the most successful and rigorous effort to date to move the discussion on institution building from empty cliches to useful insights. Based on the Latin American experience, Eduardo Lora and his colleagues have combined a wealth of data on institutional reforms, rigorous analysis and well-informed common sense to offer a fascinating view of what it takes to make the State less of a problem and more of a solution. They show that buried under the constant avalanche of bad news coming from Latin America, progress has almost invisibly taken place. More importantly they also show that that the massive doses of technical prowess and political acumen required to improve the functioning of the public sector should no longer be considered a miracle but a realistic expectation. Reforming the State can be done; and this book shows how."

"This important book provides and illuminating and informative account of reforms that are changing the institutional landscape of the public sector of Latin America countries. The book provides a gold mine of information on many of these reforms. It ought to become required reading for both policy makers and serious scholars."

"The most remarkable finding of this book is the fact that there has been a quite institutional revolution across the region that has escaped the notice of many observers."