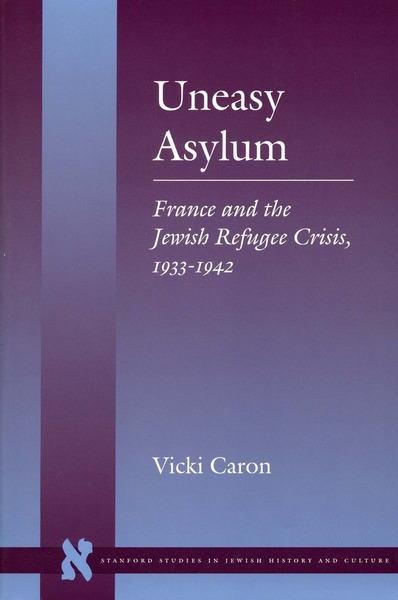 Winner of the 1997 Fraenkel Prize, sponsored by the Wiener Library.

This book, which draws on a rich array of primary sources and archival materials, offers the first major appraisal of French responses to the Jewish refugee crisis after the Nazi seizure of power in 1933. It explores French policies and attitudes toward Jewish refugees from three interrelated vantage points: government policy, public opinion, and the role of the French Jewish community.

The author demonstrates that Jewish refugees in France were not treated in the same manner as other foreigners, in part because of foreign policy considerations and in part because Jewish refugees had a distinctive socioeconomic profile. By examining the socioeconomic and political factors that informed French refugee policy in the 1930's, the author presents overwhelming evidence that Vichy's anti-Jewish measures were not merely the work of a few antisemitic zealots in the administration, nor did they stem solely from the desire of Marshal Pétain's government to find scapegoats for the military defeat of 1940. Rather, they enjoyed widespread popular support, not only from far-right organizations but also from a host of middle-class professional associations and their members (doctors, lawyers, merchants, and artisans) who perceived Jews as a competitive threat.

The author also sheds new light on Jewish political behavior in the 1930s. She demonstrates that the French Jewish community was sharply divided over the proper approach to the refugee crisis. While some Jewish leaders pressed for a hard-line policy, others worked assiduously to provide the refugees relief and to persuade the government to pursue a more liberal refugee policy. Thus the author refutes claims that the native French Jewish elite was overwhelmingly unsympathetic to the refugees because of fear that an influx of refugees would provoke an antisemitic backlash.

While this book reveals the extent to which anti-refugee attitudes and policies in the 1930's paved the way for Vichy's anti-Jewish policies, it also highlights significant discontinuities between the refugee policies of the Third Republic and those of the Vichy regime.