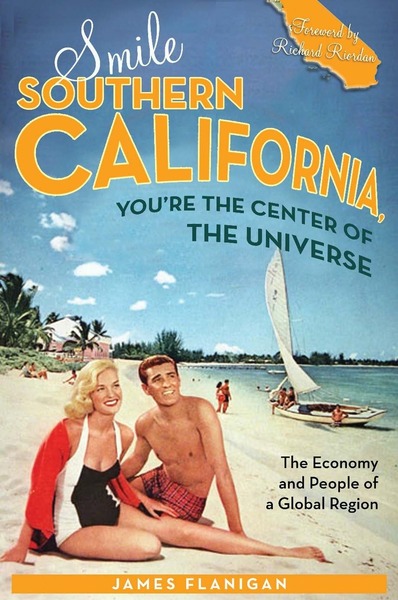 Smile Southern California, You're the Center of the Universe
The Economy and People of a Global Region
James Flanigan

Thirty-five years ago, a billboard announced to the world: "Smile Los Angeles! You're the Center of the Universe." Hyperbolic at the time, today, this exaggeration comes close to reality. While Southern California is not at the literal center of the universe, it is nevertheless an eye-popping illustration of our globalizing world.

Over the course of forty years of reporting, author James Flanigan has written about Southern California for such publications as Forbes and the New York Times. In this book, Flanigan provocatively distills his experiences with and knowledge of the region,arguing that Southern California is an economic model for the United States and the world. With clarity and precision, Flanigan examines numerous pillars of the region's growth, including dynamic entrepreneurship; the rapid growth of international trade,; the harnessing and development of new technologies; and the evolution of the entertainment industry. He assesses the achievements of the region's people, businesses, and institutions. The text highlights the influx of immigrants to Southern California, and discusses these people's role in building local businesses and bringing capital to the region. Flanigan concludes the book by looking past the boundaries of today and into to the economic opportunities and challenges of tomorrow—for Southern California and America.

Throughout the book, Flanigan weaves in numerous interviews that bring to life the economic forces that he describes. Most valuable are the stories that he shares of businesspeople—well and less known—who demonstrate where our economy stands and where it is heading.

Smile Southern California! delivers more than a "pat on the back" for the inhabitants of Los Angeles and its environs; it offers an insider's view on Southern California, valuable insights for readers with an eye on the economy, and an exciting story full of real people and triumphs to boot!

For half a century, James Flanigan has been a journalist, columnist, editor, storyteller for Forbes, the Los Angeles Times, the New York Times and the Herald Tribune in Paris and New York. He has covered economies of countries stretching from Europe to Asia, Latin America, the Middle East, and Africa. He currently writes a periodic column that appears in the New York Times.

"Thanks to this lively investigation by one of the nations most highly regarded business reporters, we can better understand how off-shore investment, technology, decentralization, can-do entrepreneurialism and sheer panache have created one of the strongest economies on the planet as well as a working model for American competition in a global age."

"Few experts understand Southern California's dynamism better than Jim Flanigan. He's poured all that understanding into this book and given us a great read about one of the world's most important economies."

"The author is a recognized journalistic authority on the topic. This study offers a refreshing view of Southern California, painting biographical narratives on a background canvas of important economic data."

—William Deverell, Director, Huntington-USC Institute on California and the West

"Flanigan argues that the rapid growth of the Asian economies since the mid-1970s and the preeminence of Los Angeles' deep-water port on the West Coast—among other factors—have made it the 'center of the universe.' This is an important insight, and one that is too little appreciated. The writing is forceful and most engaging are the stories of individuals who have built up lucrative businesses after coming to appreciate the available opportunities."

—Susan B. Carter, Professor of Economics, University of California, Riverside

"This important book offers fresh perspectives on the resilience and global reach of Southern California's dynamic economy. Distilling his four decades of experience as a perceptive observer, Flanigan has a real eye for the biographical detail that brings to life the regions dramatic story of globalization, business innovation, and immigrant entrepreneurship."

"Los Angeles is a great meritocracy. You can come here from any background and be successful. Jim Flanigan's historical account of Southern California's evolution as an economic powerhouse captures the region's entrepreneurial spirit and hints at its even more promising global future in the 21st century."

"Flanigan gives an informed sense of key transformations in both SoCal's economy and international trade attendant on developments in communications technology...this is a valuable explication of the meaning and challenges of 'globalization' for the region and the U.S. generally." Publishers Weekly 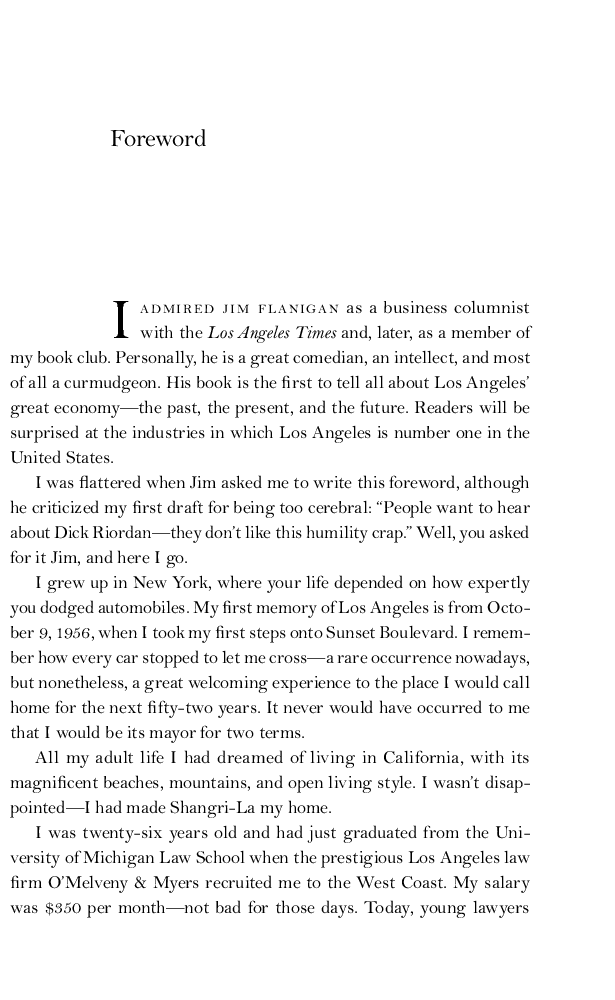 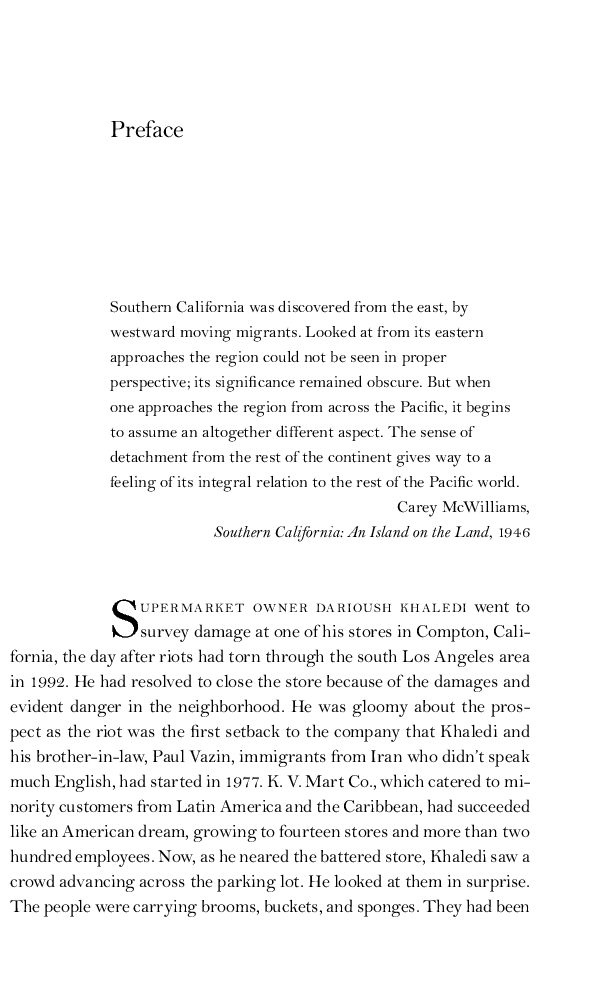 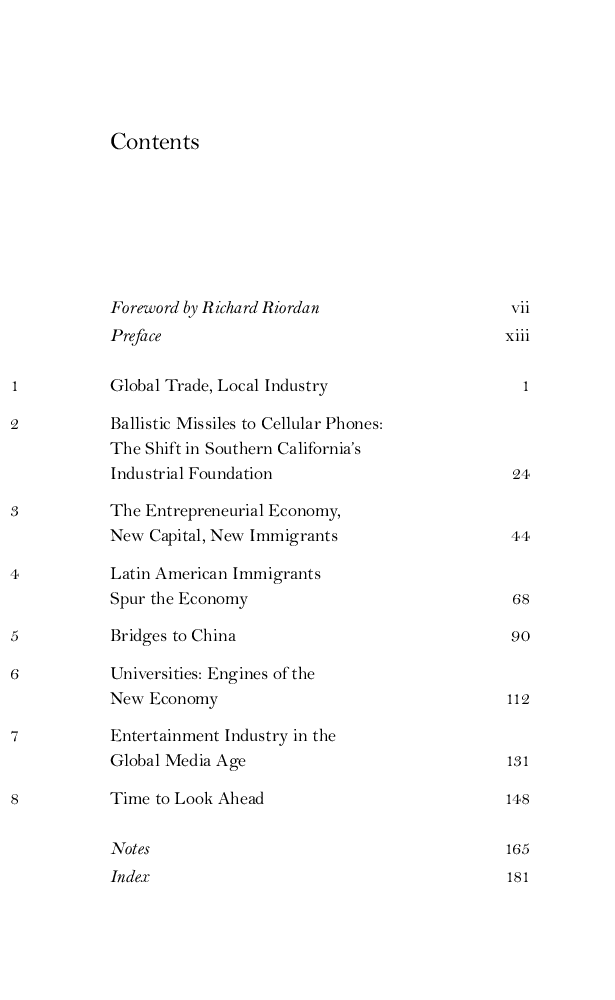