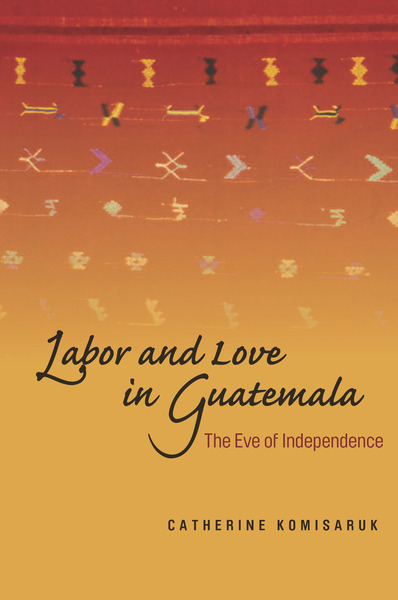 Labor and Love in Guatemala
The Eve of Independence
Catherine Komisaruk

Labor and Love in Guatemala re-envisions the histories of labor and ethnic formation in Spanish America. Taking cues from gender studies and the "new" cultural history, the book transforms perspectives on the major social trends that emerged across Spain's American colonies: populations from three continents mingled; native people and Africans became increasingly hispanized; slavery and other forms of labor coercion receded. Komisaruk's analysis shows how these developments were rooted in gendered structures of work, migration, family, and reproduction. The engrossing narrative reconstructs Afro-Guatemalan family histories through slavery and freedom, and tells stories of native working women and men based on their own words. The book takes us into the heart of sweeping historical processes as it depicts the migrations that linked countryside to city, the sweat and filth of domestic labor, the rise of female-headed households, and love as it was actually practiced—amidst remarkable permissiveness by both individuals and the state.

Catherine Komisaruk is Associate Professor of History at the University of Iowa.

"Labor and Love in Guatemala brings a fresh perspective to the decline of forced labourers and the rise of hispanised wageworkers in late colonial Spanish America . . . Labor and Love in Guatemala provides a highly accessible and much-needed contribution to the social and gender history of colonial Central American and builds upon recent scholarship exploring native migrants in the clinal cities, particularly native women."

"Through four substantive chapters, Komisaruk examines the diverse experiences of Mayan and African men and women and their social networks to demonstrate how changing gendered patterns of migration and labor fueled changes in cultural and ethnic identities . . . Throughout the chapters, the author bridges individual lives and families to the functions of the state by illustrating how people deployed state authority and the role played by the state in shaping labor, ethnic identities, and gender relations. She makes excellent use of court records' rich depictions of social life and what they can tell us about the role of the state in cultural and economic transformations at the most intimate levels . . . [M]asterful research, rich depictions of late colonial life, and textured analysis . . . Labor and Love in Guatemala [charts] new and exciting directions and will be of interest not only to scholars of Central America, but also to those interested in African diasporas, colonialism and gender, and the making of race more broadly."

—Julie A. Gibbings, Journal of Colonialism and Colonial History

"Analysis of shifting forms of labor during the colonial period is central to the historiography of Spanish America. In this meticulously researched monograph, Catherine Komisaruk expands our understanding of these processes by demonstrating how gender and family relations contributed to the erosion of both draft indigenous labor and African slavery in late eighteenth-century Guatemala. The book is a product of exhaustive research in Guatemalan archives. Notably, by cross-checking data on labor from diverse sources, including censuses, notarial records, civil lawsuits and criminal prosecutions, Komisaruk is able to unearth hard-to-find data . . . Scholars of labor, ethnicity, migration and gender will all find material of interest in this thorough case study."

"This lively and detailed study of Guatemala during the Bourbon Reform era is the kind of outstanding social history that demands a rethinking of the decades that followed . . . The range and variety of Komisaruk's archival sources, including notarial documents, tax lists, city inspection reports, census records, and civil and criminal court cases, afford a level of detail and nuance to be envied. Her use of an enormous body of court cases is one of the book's most important methodological contributions . . . Komisaruk's beautifully written monograph is a major contribution to Latin America's social history of the Independence era, one suitable for undergraduates and necessary for scholars."

"Gender is the most intimate and arguably fundamental social division. Scholars of women's history have been asserting this for decades. Recognizing the importance of gender to history, however, is easier than putting it at the center of historical research. This endeavor becomes doubly difficult when the focus of inquiry is plebeian and the society in question is impoverished. Fortunately, none of these challenges prevented Catherine Komisaruk from using gender to plumb questions about demography, ethnicity, labor, and economic activity in late colonial Guatemala, and producing a wonderful monograph in the process . . . [An] impressive and major work of scholarship."

"By linking the history of Indian and African labor with a gendered analysis of migration patterns, the author reveals the forces that wrought social change in Guatemala . . . Recommended."

"In this superb study, Komisaruk delves into the realities of ordinary people's lives to help us understand the deep causes of sweeping changes. In the past, we have tended to assume that after the wars of independence, new republican laws revamped the labor system as it existed in Latin America. Komisaruk points out that most of the changes legislated in the 19th century had occurred in practice long before, in the lives of real people. Furthermore, though it is usually assumed that educated men led the way toward change, this book shows that uneducated women were in the vanguard."

"This impressive and ambitious work covers completely new ground in the historiography of Guatemala. Komisaruk provides an unprecedented glimpse into everyday life in Guatemala City in the late colonial and early national periods, rendering plebeian society as it was (or seems to have been) rather than how it should have been or has often been thought to be. It's a remarkably effective portrait that clearly deviates from the idealized or legally prescribed picture."

"Deeply researched and cogently argued, this monograph provides fascinating insight into the daily lives and loves of Guatemala's plebeian population during the closing decades of the colony, as these people shaped the contours of their republican future." 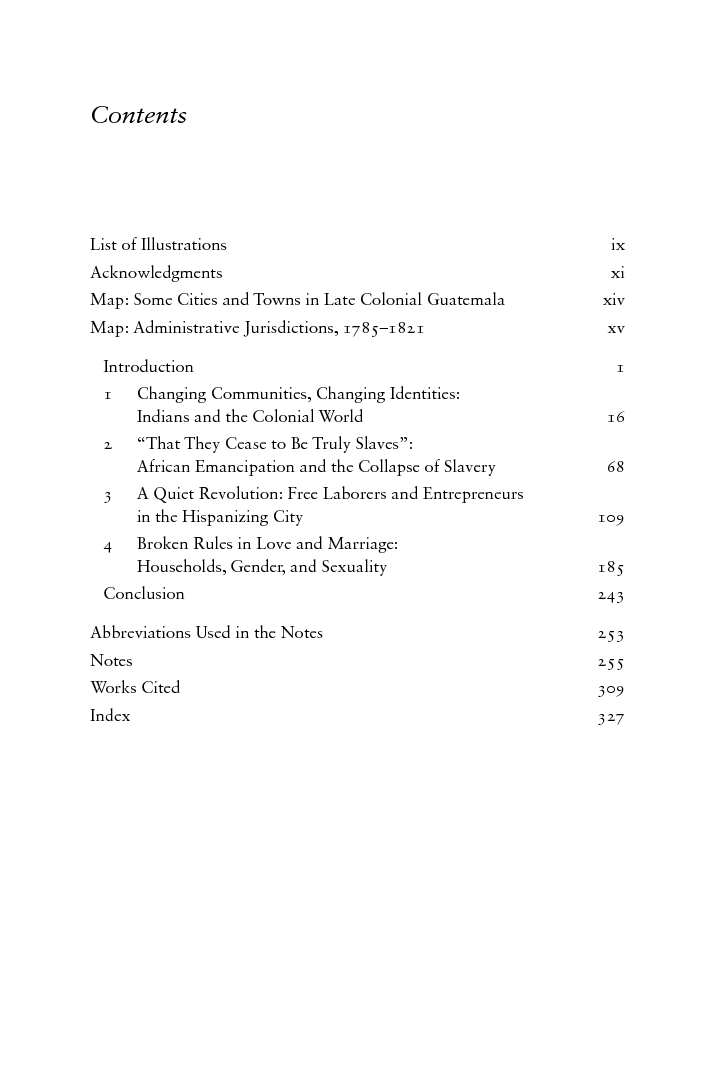 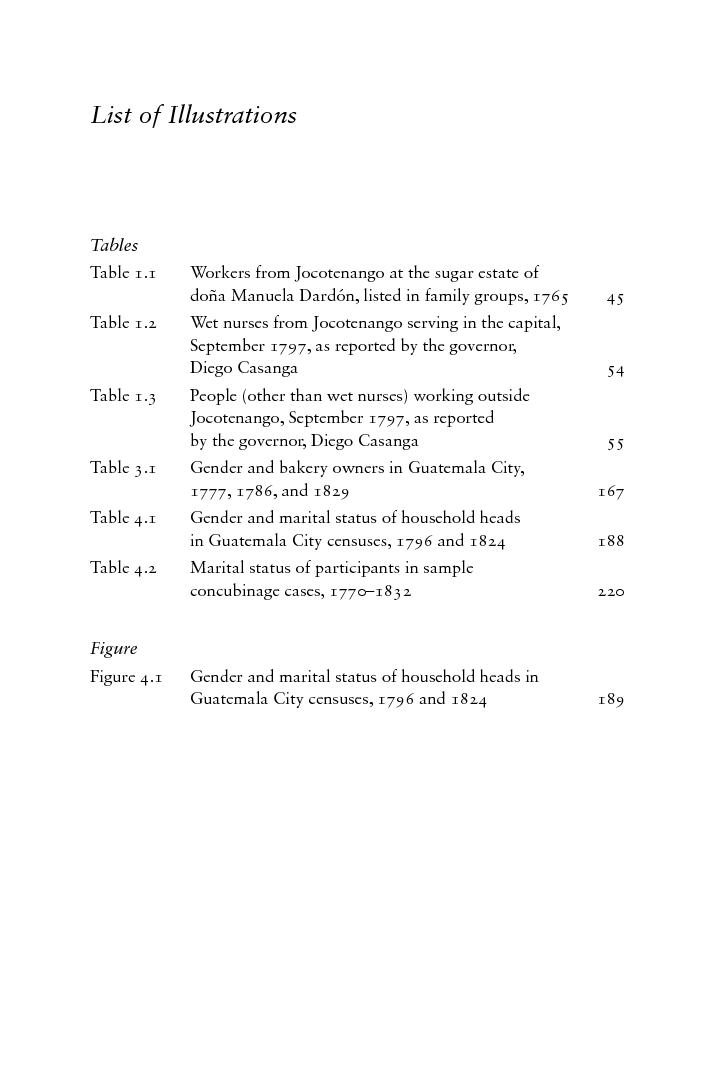 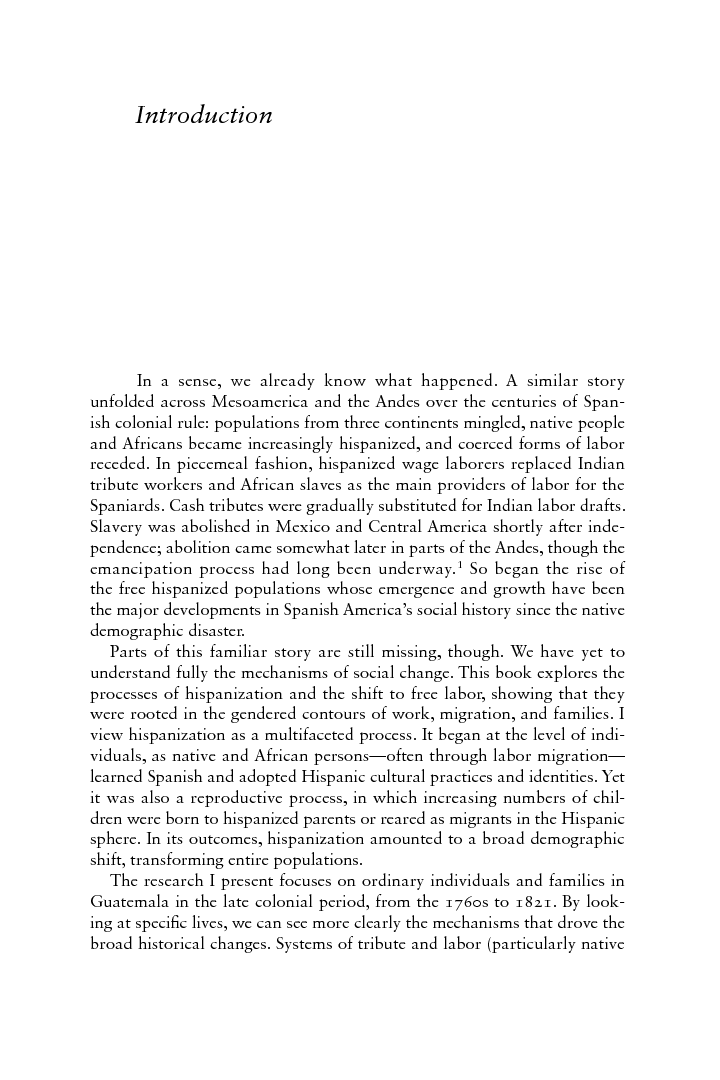