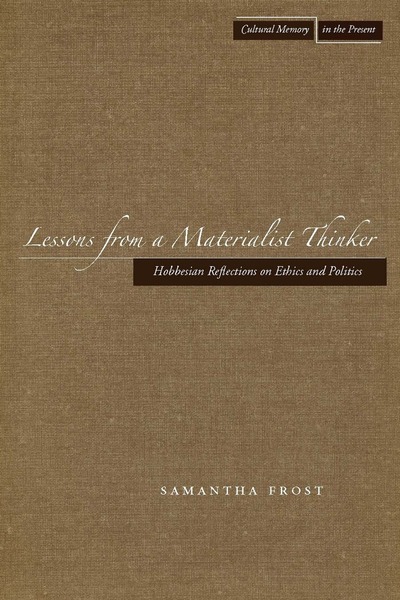 Lessons from a Materialist Thinker
Hobbesian Reflections on Ethics and Politics
Samantha Frost
SERIES: Cultural Memory in the Present

Winner of the 2009 First Book Award, sponsored by the APSA Foundations of Political Theory Section.

Thomas Hobbes is an iconic figure who serves as an easy reference for pundits commenting on the brutality of war as well as for critics of a distinctly modern individualism in which calculating and rapacious self-interest is the cause of the violence, destruction, and exploitation endemic to the contemporary world. Frost's reading of Hobbes's philosophy shows us that underlying such visions of self and politics is another iconic figure: that of the Cartesian subject. What gives the iconic Hobbes his hardcore individualism and its corollary accounts of instrumentalism, conflict, and absolutism is a Cartesian rendering of the self as split into mind and body. Carefully elaborating Hobbes's materialist ontology, Lessons from a Materialist Thinker challenges both our implicit Cartesian assumptions about the self and the commonplace Hobbes that so readily figures violence in our political imagination. Through his materialism, Hobbes presents an alternative modern account of self-consciousness, reason, agency, power, freedom, and responsibility. In doing so, he shows that our fundamental intersubjectivity and interdependence require that we pursue peace above all else.

Samantha Frost is Assistant Professor in the Department of Political Science and the Gender and Women's Studies Program at the University of Illinois, Urbana-Champaign.

"[Frost] is an exquisitely careful and attentive reader and she demonstrates a Talmudic reverence for Hobbes' texts, one that allows her to read his books as if the last three hundred and fifty odd years of heavy interpretive authority had never happened. This is a singular accomplishment and because of it, Frost has written one of the most important books on Hobbes for quite some time."

"This is an intensively philosophical book that speaks importantly to issues in the philosophy of mind, of action, and of responsibility. The author is fully conversant with Cartesian and post-Cartesian anti-materialism and has a refined and complex understanding of the Hobbesean alternative to it. As the term "lessons" indicates, Frost aims to help us escape from Cartesian ways of thinking and to move us to a sense of ourselves and one another as material, embodied beings who can and should relate to one another in sinuous but mutually productive ways."

"Drawing upon Thomas Hobbes' well-known if dark concept of the brutal self at war with all others, as juxtaposed with a Cartesian view of the self split into the mind and the body, Lessons from a Materialist Thinker questions tacitly occurring assumptions humans make about themselves as well as the common, negative view of Hobbes' insight A welcome contribution to philosophical studies shelves, especially for its insights into the border where philosophy and politics meets concepts of sociology and anthropology." 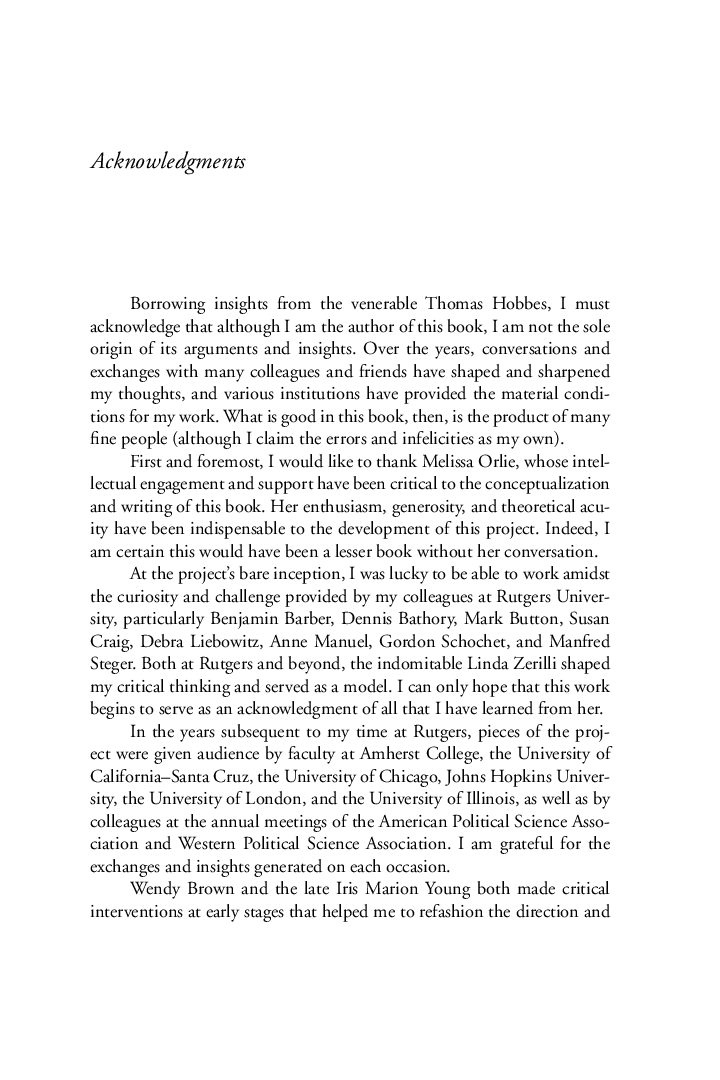 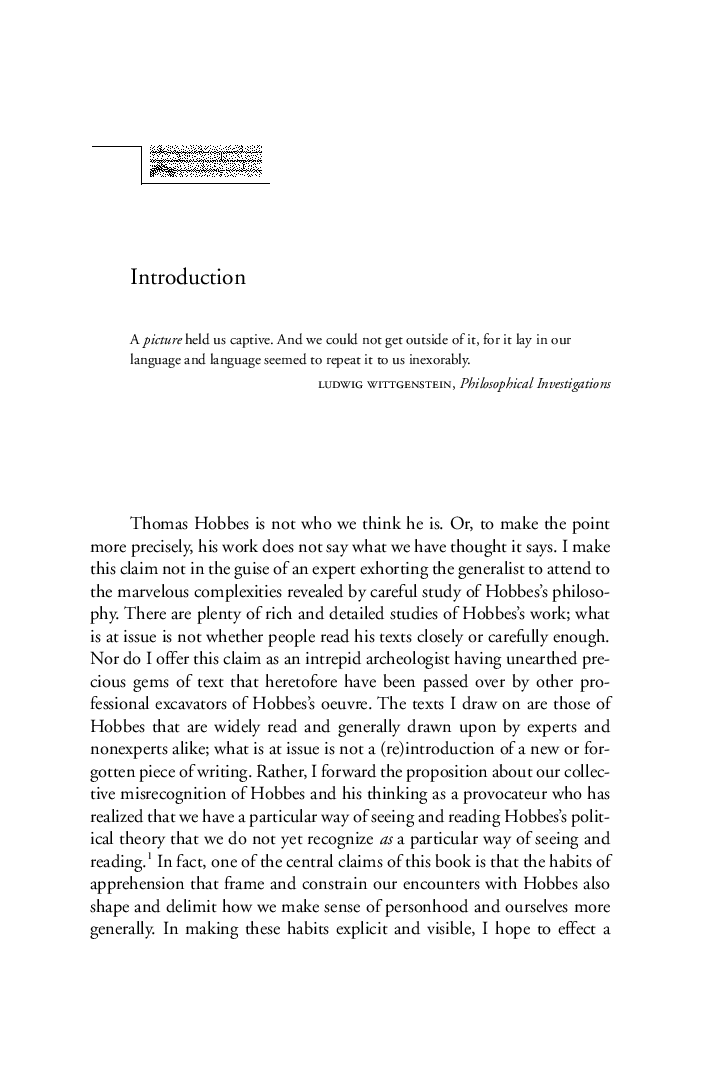 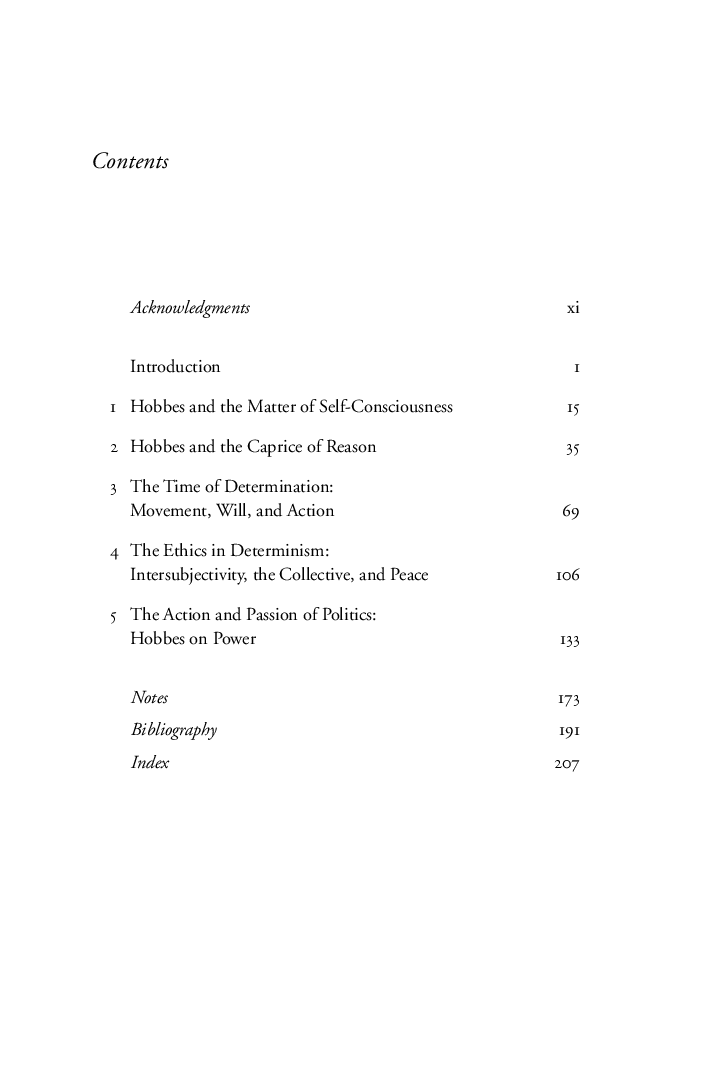