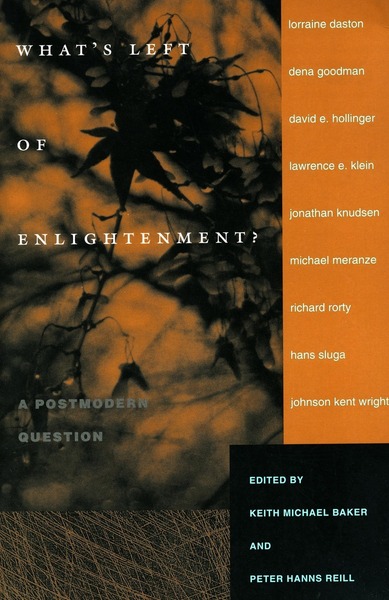 It has become increasingly clear in recent years that, for all their differences, the many varieties of thinking commonly grouped together under the rubric of “postmodernism” share at least one salient characteristic: they all depend upon a stereotyped account of the Enlightenment. Postmodernity requires a “modernity” to be repudiated and superseded, and the tenets of this modernity have invariably been identified with the so-called Enlightenment Project. This volume aims to explore critically the now conventional opposition between Enlightenment and Postmodernity and question some of the conclusions drawn from it.

In so doing, the authors focus on three general areas. Part I, “Enlightenment or Postmodernity?”, reflects on the way in which contemporary discussion characterizes the two movements as radical alternatives. Part II, “Critical Confrontations,” provides a kind of archaeology of this opposition by charting a series of critical engagements by those who have affirmed or demeaned Enlightenment values in the twentieth century. Part III, “A Postmodern Enlightenment?”, complicates the perceived dichotomy between Enlightenment and Postmodernity by pointing to the existence within the Enlightenment of elements frequently seen as characteristic of Postmodernity.

Keith Michael Baker is Anthony P. Meier Family Professor of History and Director of the Humanities Center at Stanford University. His works include Inventing the French Revolution: Essays on French Political Culture in the Eighteenth Century. Peter Hanns Reill is Professor of History at the University of California, Los Angeles and Director of the UCLA Center for 17th and 18th Century Studies. Among his works is The German Enlightenment and the Rise of Historicism.

"This volume is an original and stimulating contribution to modern intellectual history and to the history of philosophy. The scholarship is superb but not in the usual sense. It is superb because it is so reflective, self-critical, and sometimes polemical and partisan. Its authors are senior scholars in philosophy, intellectual history, and cultural studies who address large questions in their fields."

"This remarkable book reexamines the intellectual history of 18th-century France and Germany in order to bring to light a richer, more nuanced view of this pivotal period in European intellectual history. . . . Every essay in this collection is of great intellectual rigor and constitutes a serious contribution to the enduring question, "What is Enlightenment?". . . . Although essays dealing with postmodernism tend to be arcane or incomprehensible, the essays in this book are difficult, challenging, and wonderfully readable."

"Giorgio Agamben is perhaps one of the most important philosophers and literary critics writing in Italy today, and, given the scarcity of philosopher-critics translated into English from Italian, one should certainly be thankful to Stanford University Press for translating this important thinker."