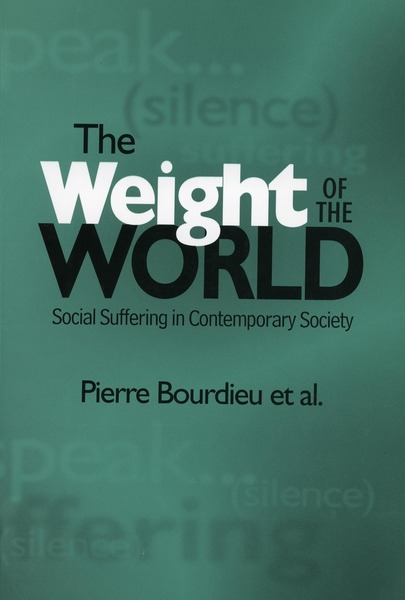 The Weight of the World
Social Suffering in Contemporary Society
Pierre Bourdieu et al. Translated by Priscilla Parkhurst Ferguson and Others

Confined in their governmental ivory towers, their actions largely dictated by public opinion polls, politicians and state officials are all too often oblivious to the everyday lives of ordinary citizens. These persons, who often experience so much hardship in their lives, have few ways to make themselves heard and are obliged either to protest outside official frameworks or remain locked in the silence of their despair.

Under the direction of Pierre Bourdieu, France’s foremost sociologist, a team of 22 researchers spent three years studying and analyzing the new forces of social suffering that characterize contemporary societies—the daily suffering of those denied the means of acquiring a socially dignified existence and of those poorly adjusted to the rapidly changing conditions of their lives. Social workers, teachers, policemen, factory workers, white-collar clerks, farmers, artisans, shopkeepers—no one seems to be immune from the frustrations of today’s life, not to speak of the institutions of the family, work, and education.

The book can be read like a series of short stories, which include: a steel worker who was laid off after 20 years and now struggles to support his family on unemployment benefits and a part-time job; a trade unionist who finds his goals undermined by the changing nature of work; a family from Algeria living in a housing tract on the outskirts of Paris who must cope with pervasive forms of racism; and a schoolteacher confronted with urban violence. Reading these stories enables one to register these people’s lives and the forms of social suffering that infuse them.

The original publication of this book was a major social and political event in France, where it topped the best-seller list and triggered a widespread public debate on inequality, politics, and civic solidarity. It offers not only a distinctive method for analyzing social life, but another way of practicing politics.