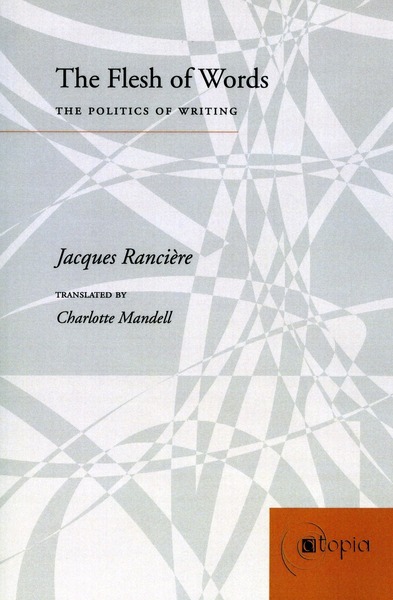 Finalist in the 2004 Non-fiction Translation Prize, sponsored by the French-American Foundation.

This new collection of challenging literary studies plays with a foundational definition of Western culture: the word become flesh. But the word become flesh is not, or no longer, a theological already-given. It is a millennial goal or telos toward which each text strives.

Both witty and immensely erudite, Jacques Rancière leads the critical reader through a maze of arrivals toward the moment, perhaps always suspended, when the word finds its flesh. That is what he, a valiant and good-humored companion to these texts, goes questing for through seven essays examining a wide variety of familiar and unfamiliar works.

A text is always a commencement, the word setting out on its excursions through the implausible vicissitudes of narrative and the bizarre phantasmagorias of imagery, Don Quixote's unsent letter reaching us through generous Balzac, lovely Rimbaud, demonic Althusser. The word is on its way to an incarnation that always lies ahead of the writer and the reader both, in this anguished democracy of language where the word is always taking on its flesh.

Jacques Rancière is Professor of Philosophy at the University of Paris VIII. Stanford has also published Rancière's Short Voyages to the Land of the People (2003).